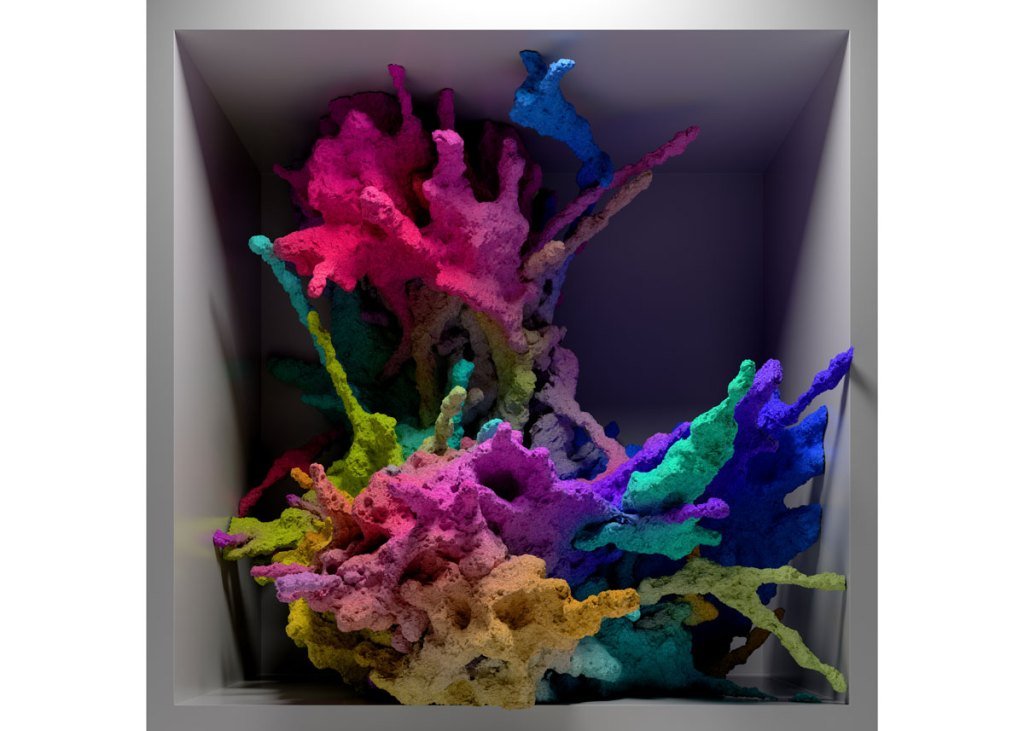 Last night, as part of Miami Art Week, Aorist, a newly established cultural organization focused on sustainable NFT-based artist commissions, hosted a reception to launch its first round of commissioned artworks and an auction of related NFTs at the Faena Hotel in Miami Beach.

The exhibition, titled “Crossroads,” features five new pieces by artists Refik Anadol, Nancy Baker Cahill, Andrés Reisinger, Auriea Harvey, and Carlos Betancourt, all of which are accessible near the hotel. Anadol’s Machine Hallucinations: Coral Dreams is a mesmerizing 40-by-40 foot video installation that features abstracted imagery of coral reefs based on AI data, and was installed on the beach.

Betancourt’s What Lies Beneath: Tipping Point, two floating sculptures of icebergs, was installed in the Faena Hotel’s pool last night, and Reisinger’s The Smell of Pink is a site-specific installation in the recently opened Faena Art Project Room. Both Baker Cahill’s Mushroom Cloud and four works by Harvey are AR-based pieces that can be activated on the beach facing Faena and around the Faena District, respectively.

At last night’s reception, Ximena Caminos, a cofounder of Aorist and founder of the ReefLine, described the new organization as creating “art for the future” that would leverage “technology, sustainability, and creative thinking.” She added, “Art is our partner.”

In addition to the exhibition, Aorist also launched a new NFT marketplace that aims to make buying NFT artworks more easily for less-tech savvy collectors, by having its works priced in USD and accepting various forms of payment, including credit cards, ACH wire, and cryptocurrency, to purchase the work.

This approach is the brainchild of Pablo Rodriguez-Fraile, an Aorist cofounder who has been a collector of NFTs for several years. “There’s a big barrier to entry for non-tech people,” he said. “So we’re trying to make the experience super user friendly, so the blockchain isn’t important—it’s the art that is important.”

Aorist’s marketplace also looks to be one of the most sustainable platforms out there by using Alogrand, “a carbon negative blockchain infrastructure,” according to a release, as well as purchasing carbon credits that will benefit reforestation projects in South America for each transaction conducted on the platform. “As an industry we need to improve on our carbon emissions,” Rodriguez-Fraile said.

As part of the marketplace’s launch, Aorist also auctioned off 11 NFTs based on the “Crossroads” works and other digital-based commissions. The highest selling piece of the night was the NFT based on Anadol’s Machine Hallucinations: Coral Dreams, which went for $851,130 to someone who was bidding in the room at the party. (Bids were also accepted online.) Proceeds from that sale of that work, as well as selected others, will benefit the ReefLine, which aims to build a habitat for endangered reefs off the coast of South Beach. Two pieces sold for $100,000: Baker Cahill’s Mushroom Cloud and Reisinger’s The Smell of Pink. Other works sold for prices between $11,000 and $50,000.

Also included in the auction was an NFT related to Pilar Zeta’s Hall of Visions, a large-scale sculptural work of several arches installed over a black-and-white grid floor that draws inspiration from Art Deco, Asian architecture, and Argentina’s Madí Movement. Installed on the beach outside the Faena Hotel, that piece was commissioned by Faena Art, the nonprofit organization related to the hotel, which is celebrating 10 years in Miami.

Rodriguez-Fraile said that Aorist is looking to build an organization with various partners that acts as “a liaison between the physical and the digital, between the traditional and the new. We’re trying to show that this is a new and different way to operate.”