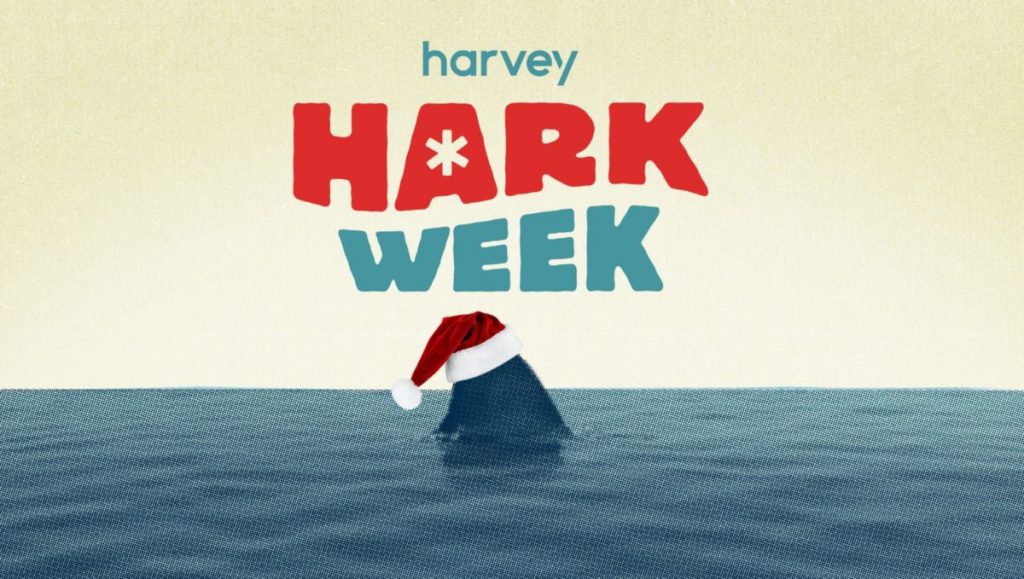 The Harvey Agency has a holiday NFT campaign.

Baltimore-based consumer experience and creative agency Harvey has released a series of limited-edition nonfungible tokens (NFTs) to support the conservation mission at Inner Harbor’s National Aquarium. With NFTs that feature mashups of shark and holiday memes, Harvey created a “holiday” for the occasion, known as Hark Week.

With NFTs riding a wave of momentum, Harvey is harnessing the technology for philanthropy. Three of the four NFTs are selling for .25 Ethereum each, which is valued at $932, at the time this piece was published. The fourth is selling for .2 ETH, which is valued at $746 as of press time. They’re available through Dec. 24, and all proceeds will be donated to the National Aquarium.

With the increasing popularity of the blockchain and cryptocurrency, Harvey is bringing eyes to an organization that’s dear to the city and often tops the list of reasons folks visit Baltimore. Plus, this news provides yet another opportunity for Technical.ly to explain NFTs, and how they’re being used.

“It’s a cool way to play with a technology that’s been getting more traction,” Matt McDermott, president and CEO of Harvey, said of Hark Week. “This is definitely a place brands are going with NFTs.”

Gucci has an NFT. Coca-Cola has sold them. Video game companies like Ubisoft are getting into them. After the embrace of NFTs by the art world earlier this year and the rise of Opensea, which makes the process of releasing an NFT to the market more accessible to the average internet user, NFTs are becoming another way for brands to make their mark, and generate income.

At a base level, as Technical.ly explained in previous reporting, NFTs are digital items that contain a verification that the item is authentic and unique. This is often powered by the Ethereum blockchain, which is the same kind of technology underlying a cryptocurrency like Bitcoin or Dogecoin. Harvey chose to mint the coins on the Polygon blockchain, which it said is more eco-friendly.

NFTs can be traded with currency, and have already proven to function in a similar vein as collecting art or baseball cards, just with digital products. The underlying technology brings more transparency when it comes to determining what a product is worth. That’s because an NFT’s value is tied to the price of Ethereum, which is the cryptocurrency used to trade NFTs, and is also minted on the ethereum blockchain. Like any currency, there can be ebbs and flows, but it has a standardized value that’s set by a single source.

And the value can increase over time. To put it in perspective, Baltimore artist Tracy Halvorsen‘s NFT art was going for $366 at .15eth in April of 2021. Eight months later in December, the Harvey firm’s NFT’s are going for $932 at .25eth today.

“You can also look at NFTs as capsules for currency,” said McDermott.

The NFTs were designed by the agency’s Senior Art Director Rick Bowman as a riff on shark week with a holiday spin. One NFT, titled “Hark Da-DUM,” builds off the iconic Jaws movie poster design, expect it’s a giant Christmas tree below Santa on his sleigh instead of a shark rising to meet a swimmer.

The purchase of each Harkweek NFT includes not only exclusive ownership of the digital asset but also unlocks additional perks, including a free Ocean Ambassador membership from the National Aquarium and a gift bag from Harvey featuring products from clients of past and present, including local brands like Flying Dog Brewery, Michele’s Granola, Goetze candies, and more.

Donte Kirby is a 2020-2022 corps member for Report for America, an initiative of The Groundtruth Project that pairs young journalists with local newsrooms. This position is supported by the Robert W. Deutsch Foundation. -30-