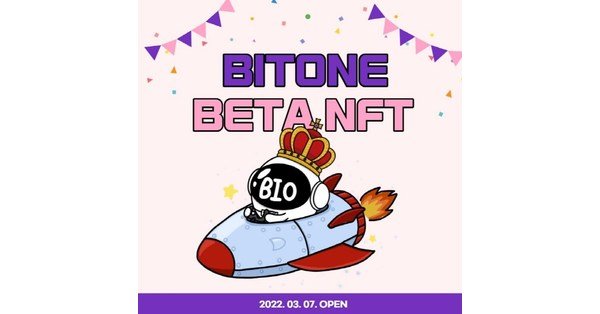 BETA NFT, newly launched by BITONE, has a special worldview rather than a simple way of making money by trading existing NFT. BITONE NFT is not only owned, but is equipped with various functions and benefits, and as an official partner of BITONE, it will expand its capabilities to the MetaVegas platform, which is about to open soon.

Major benefits include mounting of 100 to 1,000 BIO listed on global exchanges, a X3 interest mining pool for NFT holders only, BITONE ‘s BIO token burn amount paid every time, MetaVegas Avatar NFT pre-purchase tickets and unconventional benefits such as airdrops. This is to expand the ecosystem of BITONE Foundation and, accordingly, allow users to enjoy a wide variety of services.

BITONE’s NFT, issued based on the BITONE Foundation’s own technology, 2DIVS (Distributed Data Integrity Verification System), will receive a total of 4 types of NFT through lottery at $500. NFT drawn by lottery is NFT that can generate several times the profit only with the number of BIO each mounted. In addition, due to their stake in the amount of BIO token burn, holders who own 20 or more NFTs will receive a dividend of N/1 for each burn of BIO. This limited edition NFT will be traded for large-scale global NFT users such as BITONE’s own NFT market and OpenSea, big external NFT market, after BITONE’s mainnet announcement.

This BETA NFT has limited quantity of 10,000, and it is expected that keen competition will occur for users to get NFT. BITONE’s Beta NFT has been opened on March 7.