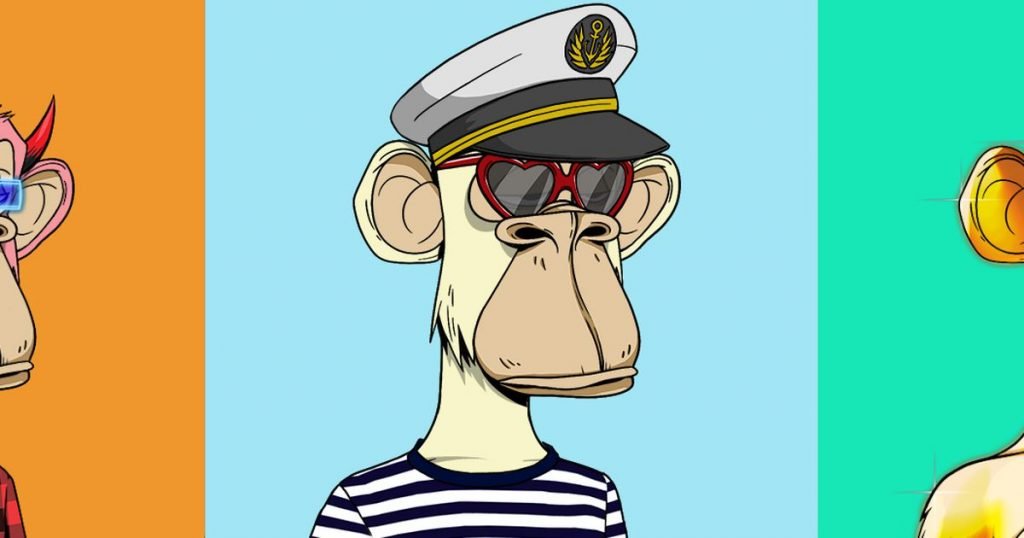 Consciously or not, you’ve probably seen a Bored Ape Yacht Club NFT around. That’s especially true if you’re on Twitter, where owners of Bored Ape Yacht Club (BAYC) NFTs flaunt their prize by using it as a profile photo. One of the most successful collections in the nonfungible token space, there are 10,000 Bored Apes and right now the cheapest you can buy one for is 52 ether — $209,000.

Known BAYC owners include Post Malone, Steph Curry and, most recently, Jimmy Fallon. Fallon’s ape is the one in the center of the trio above, with the striped T-shirt and the captains hat. Like everything else to do with NFTs, the Bored Ape Yacht Club is contentious. Ape owners inspire jealousy among those who own and trade NFT art but confusion and suspicion among people who don’t. Here’s what you need to know about the collection.

Broadly speaking, there are two types of NFT art. First, you have one-off visual art pieces that are sold as NFTs, just like paintings in real life. Think the Beeple NFTs that were sold at Christie’s auctions for as high as $69 million. Second, you have NFT collections, or “projects”, like the Bored Ape Yacht Club. Kind of like Pokemon cards, these take a template and produce hundreds or thousands of variations, each ranked in terms of rarity. In the case of BAYC, there are 10,000 apes, each with different “properties”: varying fur types, facial expressions, clothing, accessories and more.

This is a complicated question. The short answer is that, like real-world art, value is very much in the eye of the beholder.

Let’s start at the beginning. Bored Ape Yacht Club was launched in late April by a team of four pseudonymous developers, Gargamel, Gordon Goner, Emperor Tomato Ketchup and No Sass. It took 12 hours for all 10,000 to sell out at a price of 0.08 ether, around $190. As you can see in the price chart below (the price on the Y axis is in ether), the price grew steadily from April to July before rocketing in August.

Bored Ape Yacht Club has done a few things to keep owners interest. First, it created the Bored Ape Kennel Club, offering owners the opportunity to “adopt” a dog NFT with traits that mimick those of the Bored Apes. In August came another freebie: digital vials of mutant syrum. Owners could mix their Bored Ape with the syrum to create another NFT — a Mutant Ape. Both Kennel Club and Mutant Ape NFTs sell for a lot, with floor prices of around $14,000 and $26,000 respectively.

Of course, there’s a business aspect to developing a community. Art of any kind is worth only as much as people are willing to pay for it. In an NFT collection, the floor price is essentially equal to what the least-invested members are willing to sell for. People believing they’re holding a token into a community results in fewer people listing their Apes for sale. Selling your ape isn’t just selling an NFT, but a community pass too.

Plus, once a collection reaches a certainl level of value, it becomes a status symbol. People in the cryptocurrency and NFT space use profile pictures for Twitter, Discord and other platforms like chief executives wear Rolexes. You can download a JPG of a Bored Ape just like you can wear a $10 Rolex knockoff. In both cases though, people will know.

More unusual, though, is what people are doing with their Apes. Owning a Bored Ape NFT gives you full commercial rights to it and holders are taking advantage of that in some creative ways. One Bored Ape owner set up a Twitter account for his ape where he created a backstory, turning him into Jenkins, a valet that works for the Yacht Club. In September, Jenkins was signed to an actual real-world agency. He’s getting his own biography — written in part by New York Times best seller Neil Strauss. Universal Music Group has invested by signing a band consisting of three Bored Apes and one Mutant Ape.