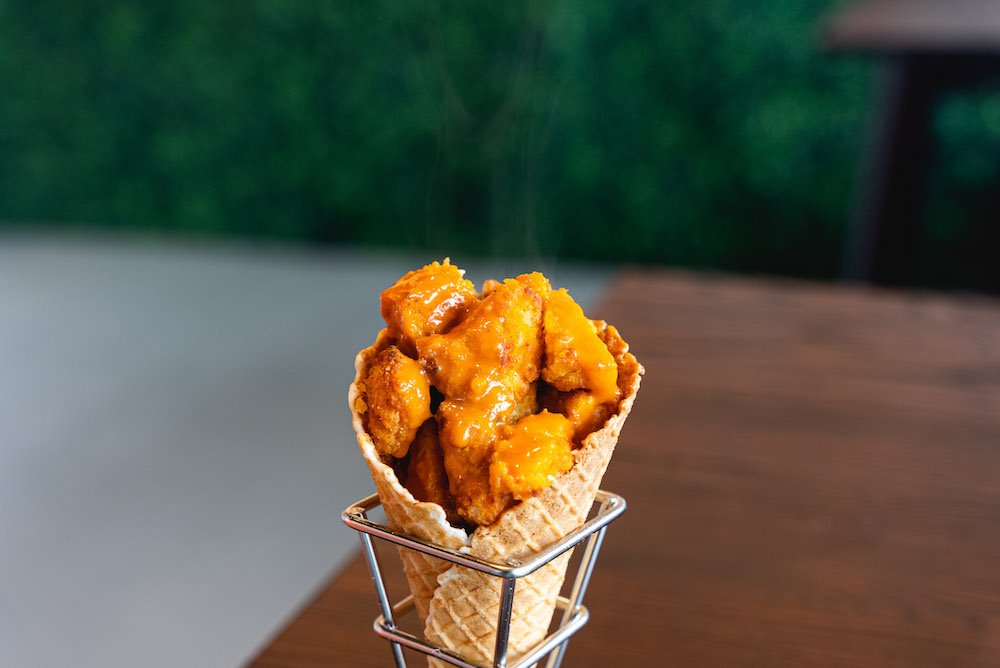 The franchise brand Chick’nCone on Friday began selling NFTs in an innovative program designed to allow token holders to share in royalties and fees as the chain grows.

The 24-unit fast-casual concept has a menu of fried chicken tenders with various sauces, served in waffle cones. Founded in 2014, the Ft. Lauderdale, Fla.-based chain has aggressive growth plans across the U.S.

Jonathan Almanzar, Chick’nCone’s co-founder and CEO, said the NFT sale brings the cryptocurrency world together with real-world restaurant franchising in a way that benefits all involved.

“We couldn’t help but notice all of the buzz and excitement surrounding the NFT space right now,” he said in a press release announcing the program. “A forward-thinking spirit is what has really propelled our brand thus far and we were confident that if we established an NFT program of our own, it would successfully take off.”

In an interview with Nation’s Restaurant News, Almanzar said he was an early investor in Bitcoin, which in part helped him fund the launch of Chick’nCone.

Here’s how the NFT program works:

The chain is using the cryptocurrency exchange Ethereum to sell tokens called Chick’nCoins —which, despite the name, are not coins like Dogecoin or ETH. It was really just meant to be a play off the brand name, he said.

In this case, each coin, or token, represents ownership of a certain geographic area in the U.S. the chain hopes to develop, typically a county. Token holders will receive 50% of the initial franchise fee for any new units to open in that area. In addition, they will also earn 2% royalty on sales at all locations in the territory, paid monthly, for six years.

The revenue will be divided equally among token holders for the region. And tokens will be limited, though more populated areas will have more Chick’nCoins issued. Regions can hold a minimum of three locations, but most can hold up to five.  In areas with multiple coin holders, up to 25 Chick’nCone locations could open.

The cost of a Chick’nCoin is set at $14,500 or 5.5 ETH — buyers have the option of using U.S. dollars or cryptocurrency. Almanzar said on Friday that 5.5 ETH was more than the dollar amount, in part because there are fees for conversion to U.S. dollars. After the company sells 100 tokens, they plan to reevaluate the price, given the fluidity of exchange rates.

But, given Chick’nCone’s franchise fee is $45,000, a coin holder could earn $22,500. If there are already units open in the territory, that coin holder could also begin receiving monthly dividends immediately.

Of course, there is also the possibility that no units open in the region, which means the token holder sees no return from that NFT purchase.

As is common for NFT sales, Chick’nCone held a small private pre-sale of 10 Chick’nCoins, and all of them were sold.

Almanzar said, however, that the sale drew more traditional investors than crypto enthusiasts, so they ended up taking the U.S. dollar investment option, wiring money and sending checks, and signing contracts the old-fashioned way.

When the coins began selling on Ethereum on Friday, another 10 had sold.  Almanzar said he would be happy to see one coin sold per day for the rest of the year, which would raise roughly $5 million. Coin holders can also resell their Chick’nCoins, which would generate a 10% royalty for the franchisor.

The company created 933 Chick’nCoins in total. If all of the coins sell, the company has the potential of raising close to $14 million.

“It’s basically our capital plan without giving away equity,” he said.

The additional funding will help fuel the chain’s growth strategy. Almanzar said he would like to boost his support staff and create new formats for unit growth — including his idea of turning shipping containers into stand-alone drive-thru restaurants, “like a business in a box,” he said. “And we have some other ideas for helping franchisees on the labor front.”

Almanzar sees other opportunities for restaurants in the crypto space. As McDonald’s, Panera Bread and Chipotle Mexican Grill have demonstrated, there may soon be virtual restaurants within games where guests can order for delivery.

“I really want to get to the point where we’re accepting crypto as payment,” he said. “I have thought a lot about how to cross NFTs and restaurants. I have thought about doing smaller things, like a token that gives you a forever discount. Remember the forever stamp?”