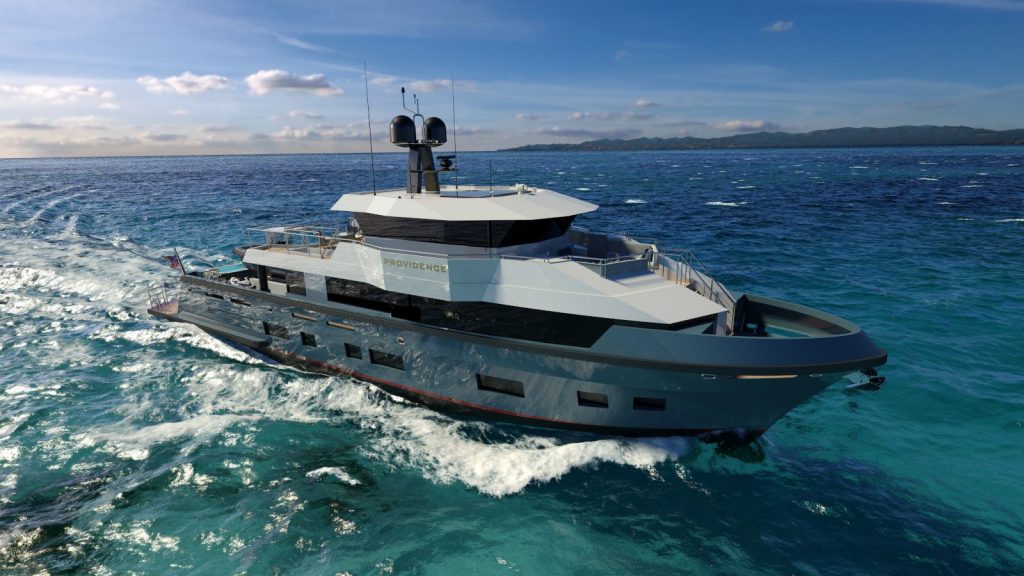 Cloud Yachts has announced the sale of a 33.5 metre Tactical 110 NFT to an American owner, in what is believed to be the first NFT superyacht sale of its kind on the Ethereum blockchain.

The sale was completed by Cloud Yachts and construction on the vessel is now officially underway at Canadian shipyard Tactical Custom Boats. The build is expected to take around 36 months and the commissioning owner will have ownership of both the non-fungible token as well as the vessel in its physical form.

Designer Gregory C Marshall, who recently unveiled a collection of NFTs with Cloud Yachts at the Miami Yacht Show, introduced the owner to the concept of NFT technology and is responsible for the yacht’s exterior design.

The yacht itself builds on the success of the smaller Tactical A-44 and will be built with a fibreglass hull and aluminium superstructure. In order to accelerate the build time, the interior will be finished in high-quality vinyl wrap designed to mimic the look of traditional woodwork. The first hull will be powered by C-18 Caterpillar engines and the second hull will have the option of C-32 engines.

The NFT was minted on NFT marketplace Opensea on March 10. When hull one is completed, Cloud Yachts and Tactical Custom Boats will mint a second NFT for the owner which will hold all metadata from the build. In a statement, the owner of the first Tactical 110 NFT said: “The NFT I bought this week seems to be useful in ways I had never imagined – like having all the data from my vessel at my fingertips.

“It’s fascinating to watch Tactical Custom Boats, Greg Marshall, and Cloud Yachts apply this technology to the build process. It will be a real adventure, just like travelling the world in an expedition yacht.”

The NFT for the second hull will be available to purchase through Alex G Clarke of Denison Yachting at the Palm Beach International Boat Show, which kicks off on March 24. “Our end goal is to make a complex two-to-three-year build period a better, more efficient experience for [the owner],” said Clarke.

“We all understand that this process will develop and become more complex as the project takes shape. Every day we learn a little more and seem to find a new application for this technology, and it’s clear this is just the beginning.”

The news comes after it was announced that 63 metre NFT Project Metaverse, also designed by Gregory C Marshall, had been listed for sale on the blockchain. The project will make its debut at the Palm Beach International Boat Show and is set to be built by American shipyard Delta Marine.