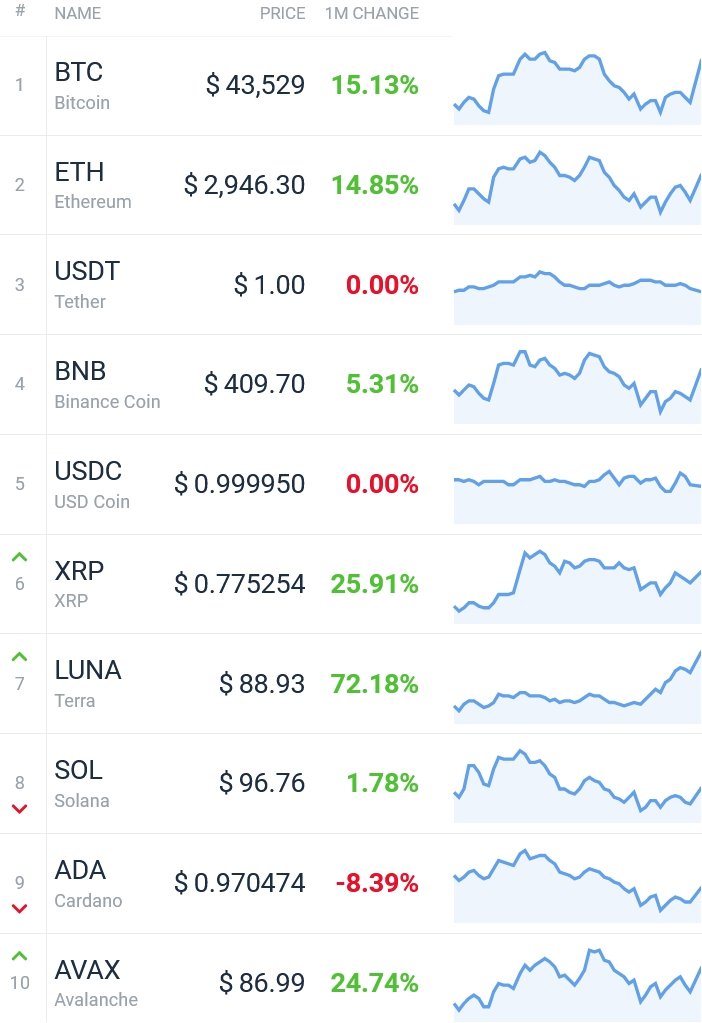 March is here, spring is upon us, and the situation in the crypto market is also becoming brighter compared to what it had been during the winter months.

As always when we enter a new month, we take a look in the rearview mirror to see how the past month had gone. And compared to January, February was a very strong month for the crypto market, with many large-capitalization cryptoassets seeing double-digit percentage gains for the month.

The top 10 coins by market capitalization saw generally good performance in February, with all coins except Cardano’s native token ADA rising in price.

Bitcoin (BTC), on its end, rose by 15.13% for the month to a price of USD 43,529, while the second-largest crypto, ethereum (ETH) rose by 14.85% to USD 2,946. The gains for both coins last month marked a break up above a previous downtrend, indicating that a more bullish period could be ahead for the two largest cryptocurrencies.

The strongest from the 10, however, was terra (LUNA), which rose by more than 72% during the month of February. Following the gains, LUNA is now within relatively close distance from its all-time high, right around the USD 100 mark.

Best from the top 50 in February

Looking now at the 50 largest coins by market capitalization, we can see that the majors such as BTC and ETH did perform relatively well compared to smaller altcoins in February, coming in as the 9th and 10th best performers.

Coming in as the top performer among the 50 largest coins was UNUS SED LEO (LEO), the exchange token issued by Bitfinex. The coin rose more than 74% for the month after news emerged that the hackers behind the 2016 attack on Bitfinex had been arrested.

Coming in next was LUNA, which was also the strongest from the top 10, followed by XRP and Avalanche’s native token AVAX, which rose by 25.9% and 24.7%, respectively.

Worst from the top 50 in February

Moving now to look at the worst performers from the top 50 coins by market capitalization, we clearly see how strong the month of February really was, with not a single coin among the first 10 losing more than 15% for the month.

Most notable from this group of coins was the metaverse-related token SAND, which is used in the virtual world known as The Sandbox. The token dropped 14.45% for the month, after a long period in which metaverse-related digital assets received attention.

Among other major losers over the past month, OKX’s exchange token OKB stands out with a drop of 14%. The coin was followed by algorand (ALGO), fantom (FTM), and near protocol (NEAR), which dropped by 12.8%, 12%, and 11.2%, respectively.

The original meme coin dogecoin (DOGE) and the second-layer Ethereum solution polygon (MATIC) dropped the least in this group, falling by 6.75% and 6.14%, respectively.

Broadening our scope further to look at the 100 most valuable coins by market capitalization, we see many of the same coins as on the top 50 list appearing again, although there are also some newcomers.

Coming on top among the 100 largest coins was anchor protocol (ANC) with a massive gain of nearly 147% for the month. The strong monthly gains come as a result of the newly issued coin reaching an all-time low right around the beginning of February, from which it has now strongly recovered. The coin was followed by LEO and LUNA.

– As Inflation Is Here to Stay, Bitcoin, Ethereum, and Gold Investors Will Win, But Brace for Volatility – BitMEX
– Bitcoin Shows Surprising Resilience Amid Russia Aggression-Provoked Selloff
– Despite Recovery, Bitcoin and Cryptos Have More Room to Fall, Say Analysts, Pointing at a Buy Signal