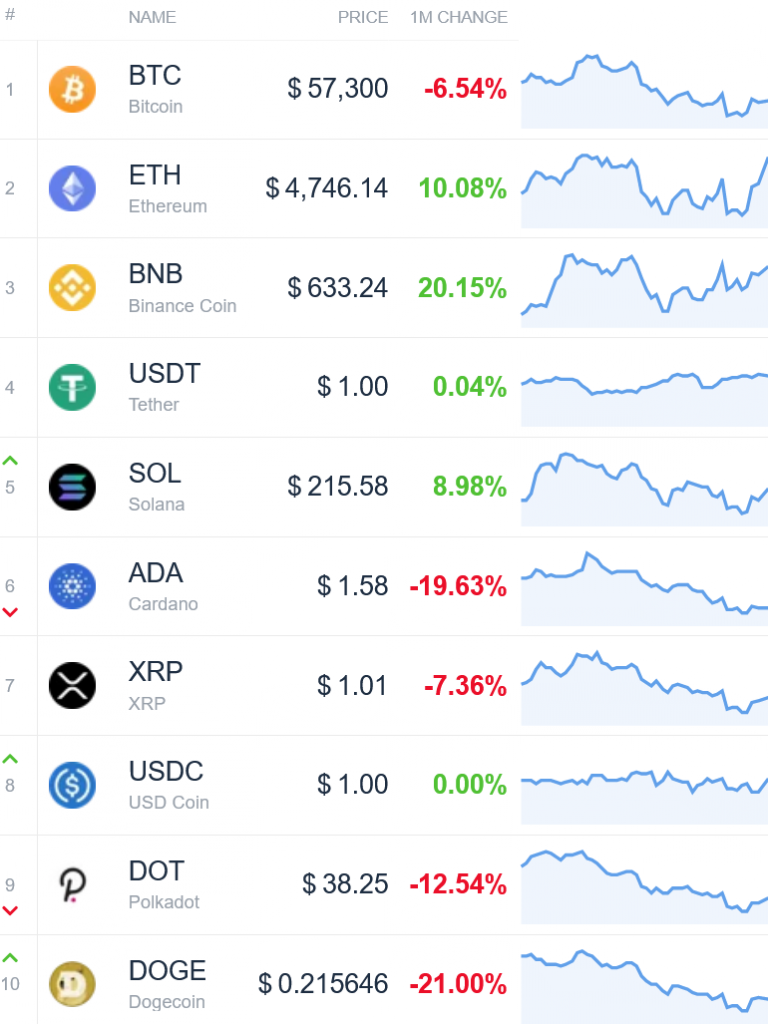 It’s December 1, and our monthly coin race this time shows that November has been a mixed bag for the crypto market.

Bitcoin, on its end, has seen a notable correction during the month, and some investors may also be disappointed that the month ended a far cry from the popular bitcoin analyst PlanB’s predicted November closing price of USD 98,000.

The top 10 coins by market capitalization saw mixed performance in November, although some coins fared far better than others.

Bitcoin hit its all-time high of around USD 69,000 on November 10, but has since fallen more than 20%, before trimming some of its losses in recent days. At the time of writing, BTC remains down just under 18% from its high, trading right around the USD 57,000 mark.

In terms of other major coins that suffered over the past month, the recently-hot meme coin dogecoin (DOGE) was hit the hardest by selling pressure. The original meme coin, which has been battling with shiba inu (SHIB) for meme coin dominance, was down by 21% for the month, after failed attempts at reaching new all-time highs in August and October.

Following DOGE, the second-worst performer for the month from the top 10 list was Cardano’s ADA token, which lost nearly 20%. The token has been in a consistent downtrend since reaching its all-time high of USD 3.1 on September 2, and remains down by almost 50% from that level.

Looking at the coins that performed well during the month of November, binance coin (BNB) stands out among the blue-chip cryptos. Binance’s exchange token rose by more than 20% for the month to a price of USD 633, not too far from its all-time high from May 10 of just over USD 690.

Best from the top 50 in November

Broadening the scope to cover the 50 most valuable coins by market capitalization, we can see that many of November’s best performers were indeed smaller-capitalization coins that don’t enjoy as much publicity as the largest ones.

Best from this group was GALA, a token issued by blockchain gaming firm Gala Games. The token experienced a major rally during the second half of November, gaining close to 700% over the course of just two weeks. The rally occurred amidst increased bullishness on the crypto gaming and metaverse sector.

In the same broad category as GALA, often called metaverse tokens, was also the sandbox (SAND), which stood out with a monthly gain of over 300% to USD 6.75. However, the current price is still below the token’s all-time high of USD 8.49 reached on November 25.

Meanwhile, MANA, the token used within the Decentraland virtual world, was up by almost 69%, trading at USD 4.58.

Worst from the top 50 in November

Moving over to the worst performer among the top 50 coins by market capitalization reveals that although many coins suffered in November, the month was more green than red.

Among the other major coins that suffered losses, fantom (FTM) can also be mentioned, with the coin dropping by more than 21% for the month to a price of USD 2.17. It should be noted, however, that prior to November, FTM saw strong gains throughout both August, September, and October.

Further, the decentralized application (dapp) platform Near Protocol’s NEAR token stood out as one of the losers in November, after a strong performance in October that brought it to an all-time high of USD 13.2. As of this writing, the token remains down by about 35% from that level.

Meanwhile, as already mentioned, meme coins like DOGE and SHIB also stood out as some of the biggest losers for the month of November.

Zooming out more to look at the 100 most valuable coins by market capitalization, we can see that a number of coins more than doubled in price over the past month, with the best performer – GALA – rising even more.

In terms of other coins not yet discussed, the decentralized exchange (DEX) token loopring (LRC) stood out with a gain of nearly 336%, while crypto.com coin (CRO) rose by well over 200%. Further, the smart contract platform Avalanche’s AVAX token, which has gotten attention this year thanks to sky-high fees on Ethereum, gained close to 100% over the past month.

Finally, we take a look at the movers among the smaller and lesser-known coins in the top 200 by market capitalization.

Here, CEEK, a token used on a virtual reality platform with the same name, rose by a whopping 722%, after moving in an almost vertical line from one all-time high to another.

The worst performer among the top 200 coins in November was SAFEMOON, the coin that ironically promises to bring holders “safely to the moon.” At the time of writing, the coin traded at USD 0.000002, down 55% for the month.
____
Learn more:
– ETH/BTC Ready to Break Higher? Not So Fast, Some Analysts Say
– ‘Failing’ S2F Model Refuels Debate on Bitcoin Price Model’s Usefulness

– Crypto Investment Trends in 2022: Brace for More Institutions and Meme Manias
– Altcoins in for a Bumper 2022 as Number of Crypto Traders Set to Double – Report