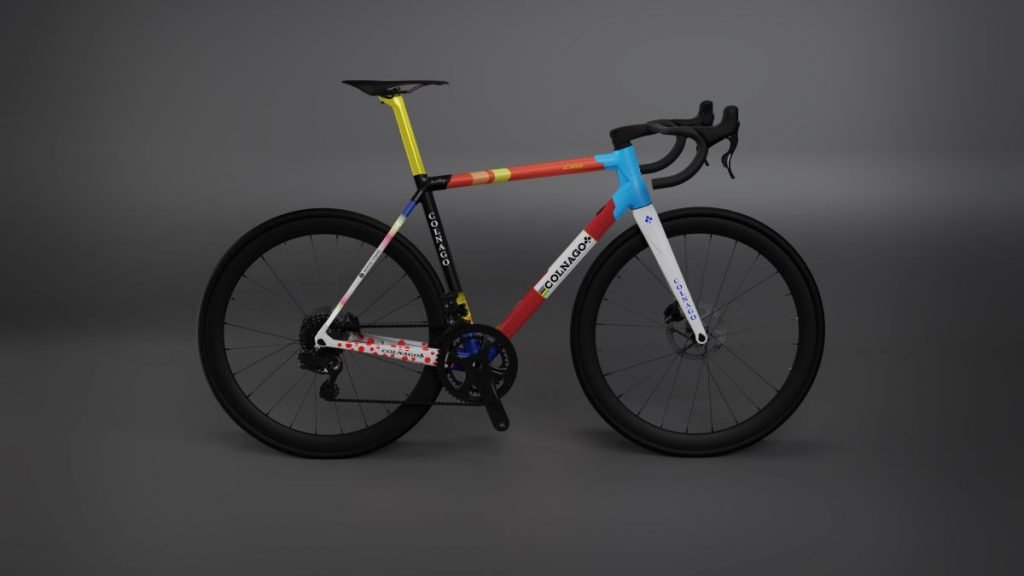 Colnago has unveiled what it calls a ‘one-of-a-kind’ opportunity to buy a special edition ‘C64 NFT’, a unique digital render of the brand’s popular C64 carbon fibre bike in a one-off design that celebrates the brand’s historically significant models.

The digital artwork combines designs from eight key models from the brand’s heritage, including the 1998 Concept, developed in conjunction with Ferrari; the C35 Crono from 1994 with its 20-inch front wheel, and the V3Rs ridden by Tadej Pogačar to the brand’s first-ever Tour de France victory in 2020.

The Colnago C64 NFT is for sale via auction at NFT marketplace, Opensea.io. However, unlike a traditional auction, the winning bidder will not actually receive any physical goods. There is no Colnago C64 bike up for auction.

“The greatest thing about this is that our C64 NFT will never be replicated by us as a physical frame – it will only be digital,” said the company’s Head of Marketing, Manolo Bertocchi.

NFT stands for non-fungible token. It is a digital token that has unique properties meaning it cannot be replicated.

In economic terms, the word fungible is used to describe something which can be readily exchanged, such as money.

For example, two five-pound notes can be exchanged for one 10 pound note, equalling the same value. However, with a non-fungible asset, the same does not apply. For example, an original piece of artwork such as the Mona Lisa cannot be exchanged or replicated. There will only ever be one original.

NFTs are a digital representation of the same concept.

They are one-of-a-kind digital assets, which with the help of blockchain technology, can be tokenised. Records of token owners are then stored on a shared ledger known as the blockchain, and even though others are free to duplicate the artwork, the buyer of an NFT will own a token, proving they are the owner of the original digital asset.

The concept has exploded in popularity over recent months, with a JPG file made by Mike Winkelmann, the digital artist known as Beeple, selling for a record $69.3 million in March, and everything from music to memes and NBA video clips being sold for vast sums of money.

According to Bertocchi, Colnago believes that it is paving the way with a tactic that other bike manufacturers are sure to follow.

“Colnago has nearly 67 years history of being first to market with many innovations that eventually become mainstream and NFT artwork is no different,” he concluded.

This might just be perfect for the Colnago superfan who has everything, not least very deep pockets.