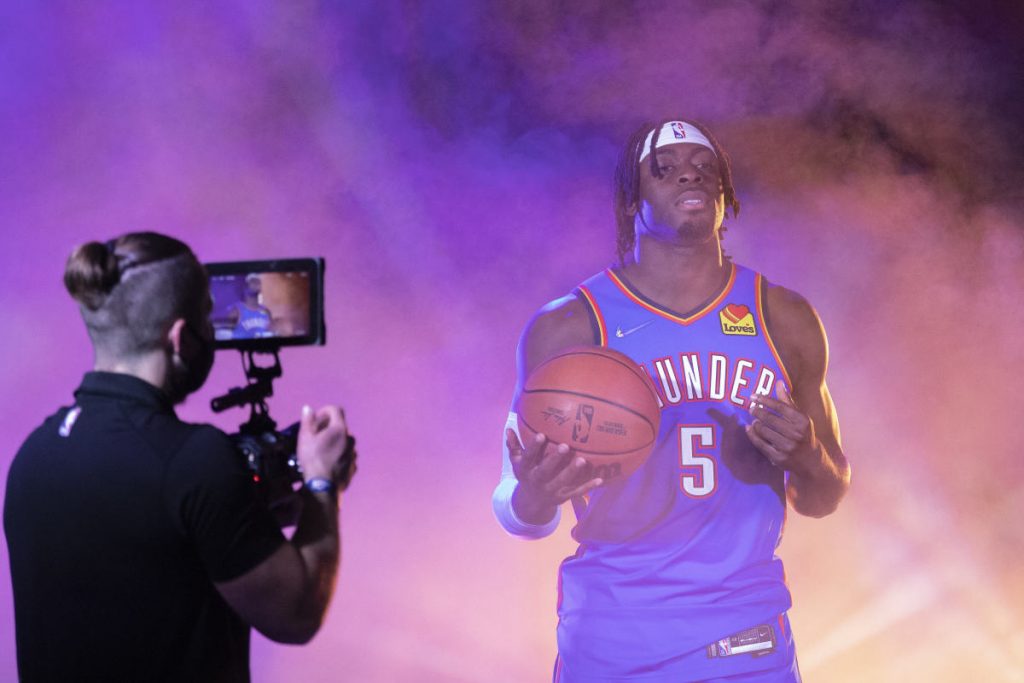 For over 100 years, sports fans have been buying, selling and trading their cards and memorabilia. As the world continues to undergo a digital transformation, the future of sports collectibles is NFTs.

An NFT (Non-Fungible Token) is an asset that carries a unique digital identity and can be traded between users. These typically come in the form of artwork, trading cards, comic books, sports collectibles and games, but actually carry a much deeper meaning.

With how popular NFTs are starting to become, athletes are beginning to get very involved. One of the most anticipated projects right now in the basketball community is Dunking Ducks, which is backed by several NBA players including Lu Dort of the Oklahoma City Thunder.

They also recently began working with Jordan Lawley, one of the top skills trainers in the United States. He’s a familiar face for Thunder fans through his work with Josh Giddey.

“The way we go about these partnerships is we really target guys who want to be involved in something and who are genuinely interested. I think the guys we’re working all really just are genuinely very interested in what’s going on in the space and think it’s the future as well,” said Luca Magnani and Jack Lerner, two of the founders of this project.

Dunking Ducks is revolutionizing the NFT space as it relates to basketball. Those who are part of the project will have the opportunity to be a part of exclusive events. With a true community feel, anyone that’s involved in the project will be part of a unique group of people.

“It really started with a few of our friends, rookies in the NBA right now and a few college guys just really having an interest for the crypto and NFT space,” said Jack and Luca. “We got into this stuff early and we found this super interesting. So once we kind of just found out that this was a real thing people are interested in, it was something that we definitely wanted to explore.”

The Dunking Ducks team had experience coming into this project, which has helped it take off as quickly as it has.

“Before we started our own, we were marketing for other NFT projects,” said the team. “We felt like with the artwork we had, it was pretty easy to get certain guys to back our project because of our relationships and because of who we already had involved. A lot of these guys we know personally and so when they partnered with us we wanted to make it as authentic as possible.”

There will be an opportunity in the near future for anyone to become part of the community. There will be 3,333 ducks on the ETH Blockchain that are up for grabs when Dunking Ducks mints next month. The Dunking Ducks team will continue to release new information and updates on their Discord and Twitter.

In the next week, Dort will be joining the Dunking Ducks Discord server to talk about the project and why he’s so excited to be a part of it. This is an exclusive virtual event that gives potential owners a peak into what being part of the community is like.

“It’s great because the community loves it, you know, they’re able to ask genuine questions and it really just it just it builds our community,” said the Dunking Ducks team about their Discord server.

Dort was a perfect fit for this project and what the founders are looking to build. Their visions are aligned and are both in it for the right reasons.

“We have a really good connection with Lu,” said the founders of Dunking Ducks. “So it really made sense not only from that end, but also because he was super interested in NFTs. He was really trying to get into that space. He really wanted to get on board with an up-and-coming project. He’s going to be changing his profile picture, coming on Discord soon, updating his bios and more. He’s basically backing it as authentically as he can until our mint. He’s really interested in having his own NFT, a 1-of-1, which we made him. He was big on a custom piece. He spent over a week perfecting the custom traits. He definitely cares a lot.”

All Dunking Duck owners will have exclusive access to every giveaway that the team runs. These giveaways will include crypto, game tickets and signed items.

Dunking Ducks is a community driven project with the backing of a roadmap as well as plenty of utilities for its holders. Holders will gain access to online interactions such as giveaways, raffles, Zoom calls and a potential DAO. They also gain access to authentic real life interactions and experiences with certain members of the professional basketball community.

Being tapped in with the basketball community comes with a lot of perks that Dunking Ducks wants to share with their community. As such, certain lucky Dunking Duck holders will be able to go to the NBA Summer league, attend pre-draft workouts and meet some of their favorite players from all around the world.

“It’s all about building something like really tight and have a community aspect to it,” said Jack and Luca. “With our stuff, there’s gonna be a lot of utility involved. For holders, we have a lot of connections with NBA Summer League, where we get a lot of all-access passes. Our holders are going to be able to do stuff like that. We do a lot of stuff with pre-draft in Miami that we’re also going to be able to have our holders attend.”

Dunking Ducks is building a true community of basketball fans around the world. Not only will they get their own unique piece of digital art, but it’ll act an an exclusive pass to owner events.

As soon as this project mints next month, a whole new world of basketball fandom will be unlocked.

Want to join the discussion? Like SI Thunder on Facebook and follow us on Twitter to stay up to date on all the latest Thunder news. You can also meet the team behind the coverage.