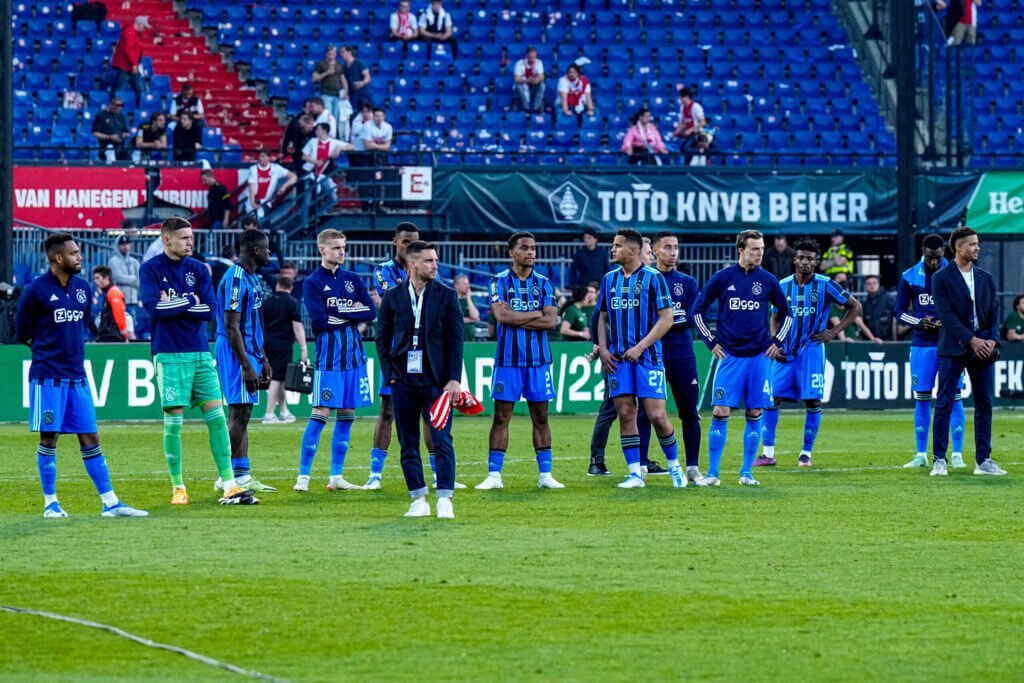 Ajax coach Erik ten Hag studiously avoided questions about his impending move to Manchester United before the Dutch Cup final last weekend, but that was not the only controversial topic he swerved in the build-up to the showpiece game.

Ajax players Davy Klaassen and Daley Blind, both Holland internationals, stand accused of trying to financially profit from dressing-room information and revealing their team’s line-ups via the trading of non-fungible tokens (NFTs) in a fantasy football game, buying up NFTs they knew would soon inflate in price.

“I don’t know anything,” Ten Hag said. “I will not announce the line-up until Sunday morning. Can the players earn money with this?”

The answer to that question, as first raised by Dutch news site BNR, is yes.

The online game, Sorare, has generated huge investment and has sponsorship deals with many of Europe’s biggest clubs, allowing its users to buy, win and manage a virtual team of digital player cards (NFTs). These are volatile in price and can generate cash prizes depending on real-world outcomes, meaning potential rewards for savvy traders.

Before Sunday’s final in Rotterdam, Klaassen and Blind appeared to accidentally tell the world who Ten Hag would likely choose to play in goal for Ajax in what turned out to be a disappointing 2-1 loss against PSV Eindhoven.

In almost any other sphere, trading confidential sporting information for financial gain would carry big penalties, but in the virtually unregulated world of NFTs, things are less clear-cut.

A spokesperson for Sorare told The Athletic it is reviewing these reports, and will “take action” to ensure the game is fair.

Sorare recently attracted more than $600 million (£460 million) in investment from Softbank, valuing it at over $4 billion (£3.1 billion). Current and former football stars including Gerard Pique, Rio Ferdinand and Antoine Griezmann are involved in the company.

The game is like normal fantasy football but its virtual cards are made artificially scarce using blockchain technology, a decentralised computer network that underpins cryptocurrencies such as Bitcoin and Ethereum. Users can make money by buying cards at low prices and selling them at high ones, and cards can generate cash prizes depending on on-field success.

Last year, The Athletic reported on how a secretive “quantitative hedge fund” run by a small group of players hoovers up millions of dollars in cash rewards from a platform that is marketed as “investing” by many paid affiliates, although the company insists it is just a game.

Although footballers gambling on their own team’s games is strictly prohibited, Sorare, which maintains it is not a gambling platform, has no such prohibitions — the platform is virtually unregulated.

But the weekend’s events in the Netherlands reveal that playing the game can have consequences. It raises serious questions about sporting integrity.

What did the Ajax players do?

Andre Onana was expected to start in goal for Ajax in Sunday’s final but a journalist at Vandaag Inside, a Dutch television programme, noticed unusual activity on Sorare before kick-off.

Klaassen and Blind had both bought the card of team-mate Maarten Stekelenburg, their club’s 39-year-old back-up goalkeeper, who had not played since August because of a serious hip injury and only returned to the bench in their most recent league game the previous weekend.

This activity by full-back Blind and midfielder Klaassen was seen as a sign that Stekelenburg would be picked rather than Onana — a suggestion that proved to be correct when the two starting XIs were named. 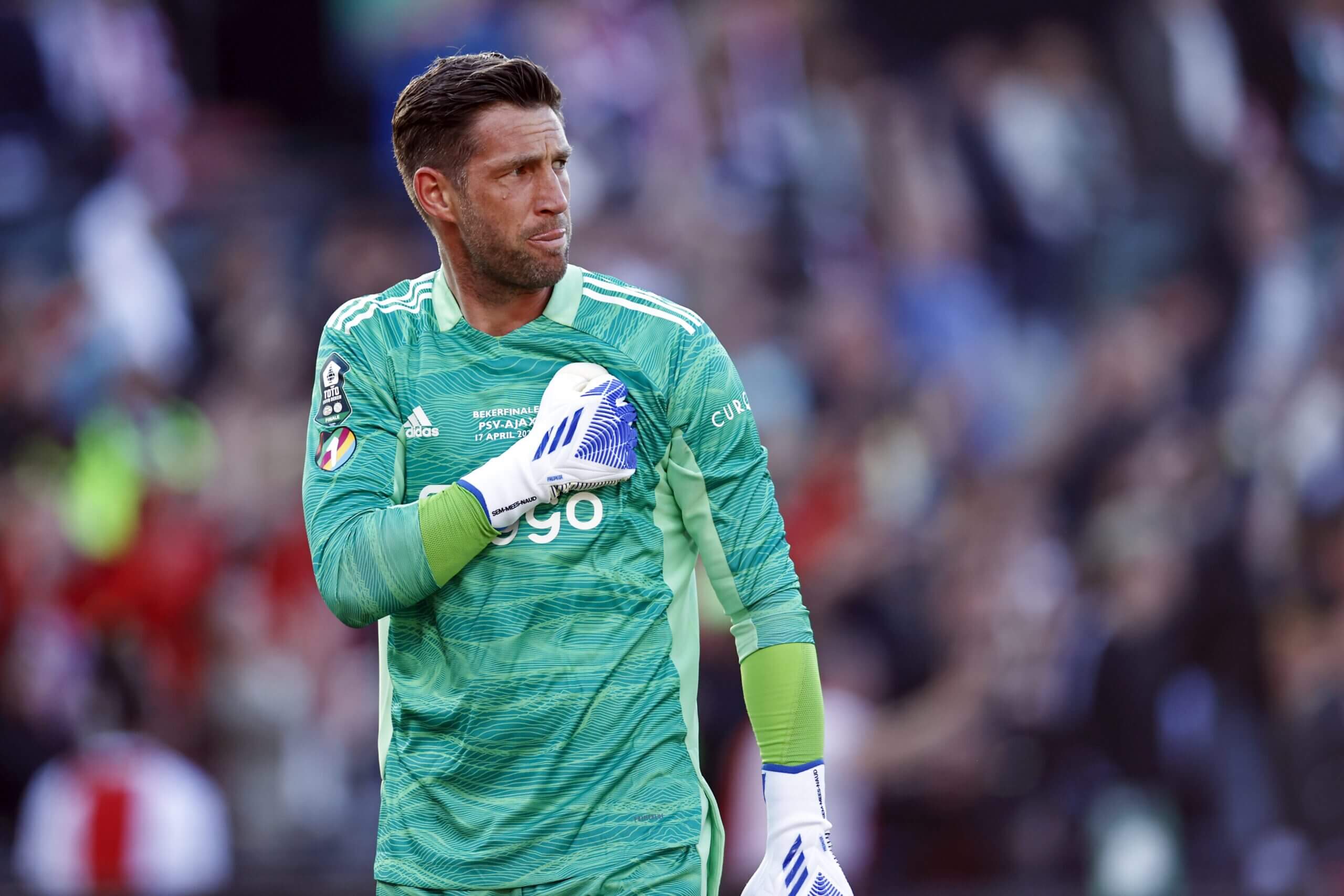 Sorare cards rise and fall in price depending on on-field activities.

Stekelenburg NFTs were very cheap on Thursday morning but shot up in value when Blind and Klaassen unexpectedly bought them — meaning big potential gains.

Blind then tried to resell his Onana card and 19-year-old team-mate Kenneth Taylor did the same.

The sums involved are fairly small relative to an elite footballer’s pay packet — in the hundreds of euros — so the players do not appear to have greatly enriched themselves. But it raises concerns about players’ involvement in a game in which they feature.

Many other pros play the game, too, including Atletico Madrid and France forward Griezmann, who is also an investor in Sorare.

It has echoes of an incident last year involving Fantasy Premier League (FPL), the English top flight’s official online version of the game where fans select players and get points depending on how well they play.

A Norwegian FPL fan set up an online “bot” to share the FPL activity of Premier League players, as well as non-playing staff at clubs, and inadvertently may have shifted global gambling odds as a result.

The account tweeted that several Aston Villa players and staff had removed the club’s star man Jack Grealish from their FPL teams, suggesting he was injured for Villa’s next match against Leicester City.

Given Grealish’s importance to the team, this information led to the match betting odds changing in Leicester’s favour.

There is no suggestion the players involved financially profited from the information. An FA spokesperson told The Athletic that although inside information is taken seriously, there are no restrictions on free fantasy football games, and Aston Villa declined to comment.

Sorare fiercely disputes that it is a gambling platform but the UK Gambling Commission has announced an inquiry into whether it should be licensed and regulated.

In leagues around the world, footballers are strictly prohibited from gambling on matches they play in, for reasons involving conflicts of interest and sporting integrity — the most extreme example of which is outright match-fixing.

There is no suggestion Blind or Klaassen have broken any rules but that may simply be because the laws have not yet caught up with football’s new age of cryptocurrency and NFTs.

What will happen next?

Football authorities are hot on prohibiting gambling, which has been a thorny issue in sport for decades, but Sorare is a new factor to consider.

“Gambling is not allowed but this is a new phenomenon, there is nothing in our disciplinary law about this,” a spokesperson for the Dutch football association told local media. “We follow such developments closely. It’s something new, but it’s on our agenda.”

A spokesperson for Sorare told The Athletic that the company is “reviewing recent reports of unfair behaviour” by players, and will “take action as necessary to ensure fair play”.

“Sorare’s priority is building a fun and fair platform for sports fans. We do not condone any unfair behaviour by any of our users and are actively adapting our game rules to ensure that our fantasy game is a level playing field for all.”

Ajax and the Dutch FA have been contacted for comment.