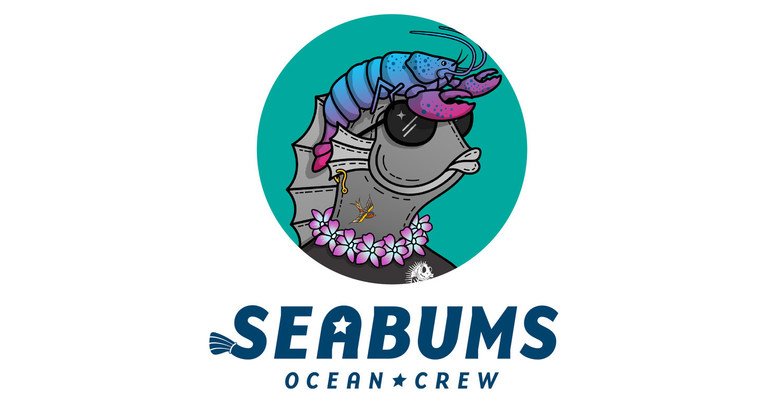 The Seabums Ocean Crew (SBOC) believes in using art to uplift, connect, and inspire people to build a community that together will drive improvements in ocean habitats and sea environments.

Seabums Co-Creator and Artist/Designer Nate Azark, developed every individual visual aspect of the Seabums collection from scratch. He has over 20 years of experience illustrating, creating, and producing, and runs 12 Line, a design studio based in Chicago.

“I haven’t had this much fun or been so challenged by a project in a long time. When Chris came to me with the SBOC concept, I knew we had to run with it and haven’t looked back. Tying my projects to charity is very important, so our partnership with Ocean Conservancy is a win-win on so many levels,” says Azark, Seabums Co-Creator.

Azark joined forces with Seabums Co-Creator Chris Madden, a crypto fan since 2016, to build the Seabums community as they are both passionate about helping charities solve big problems. Madden, a career entrepreneur, also co-founded Matchnode, a Chicago digital agency, who is managing the growing SBOC community.

“Our Giving Tuesday launch is the only way we could imagine joining the NFT community. It’s important that we’re transparent and communicative with how we’re supporting ocean charities, so we couldn’t be happier that we’re donating proceeds from our auction and mint directly to Ocean Conservancy,” says Madden, Seabums Co-Creator.

About Seabums:
The Seabums Ocean Crew (SBOC) is a friendly NFT community focused on helping ocean charities. We believe large movements are made up of small steps. With collaboration, optimism, and art, the SBOC will help drive improvements in ocean habitats and sea environments.