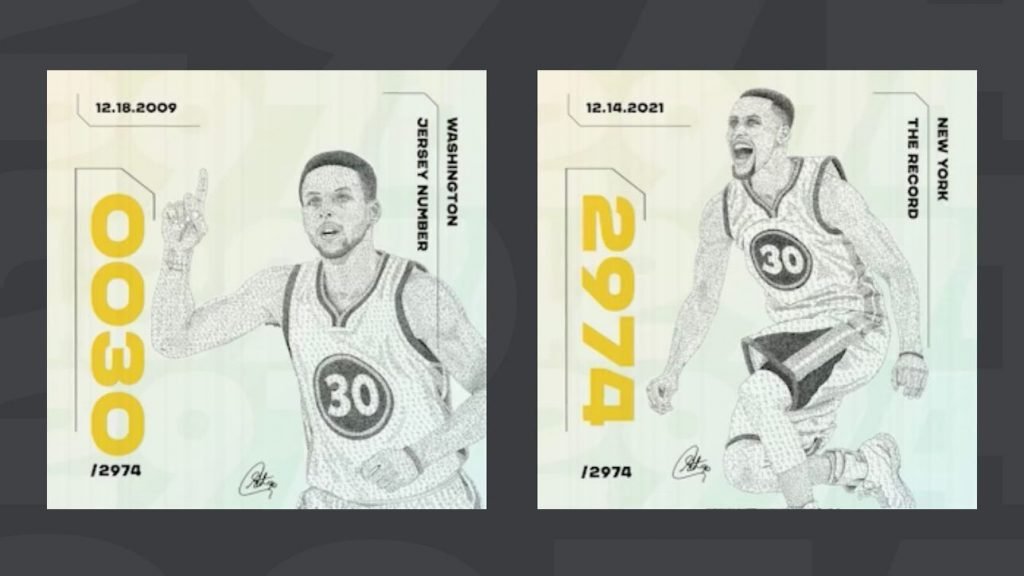 In the aftermath of his record-breaking game last week at Madison Square Garden, Golden State Warriors star Stephen Curry has launched a new NFT collection to celebrate each and every one of those 2,974 made 3-pointers.

The “2974 Collection” launched Monday at 2974SC.com, and it features a series of nonfungible tokens that are each individually numbered out of a total 2,974 — the number of 3s required to eclipse Ray Allen‘s previous mark of 2,973. Each unique NFT will be priced at $499, with Curry planning to donate 100% of his profits to the “Eat. Learn. Play” foundation that he and wife, Ayesha Curry, established in 2019.

“I’m truly grateful to be able to share this moment with all of the fans, the entire Bay Area community and everyone who has supported me throughout the years,” Curry said.

The custom-created artwork of digital moments represents each make in the entire sequence of 2,974 3-pointers by Curry throughout his NBA career, leading up to the record-setting wing heave just five minutes into the Warriors’ matchup against the New York Knicks on Tuesday.

The artwork was hand drawn by recent college graduate and artist Andrea McDonald and designed by combining a repeat “2974” print throughout to reproduce a memorable image from each made 3-pointer. Each piece includes the game’s location and date along with Curry’s digital signature.

Curry announced a multiyear equity agreement with FTX cryptocurrency exchange in September that includes both an ambassador and shareholder role. FTX will serve as the host platform for users to own NFTs from the 2974 Collection and sell them at a later date. Participating owners may also receive autographed memorabilia, tickets to games, additional NFT drops and early access to Curry Brand limited-edition items in the future.

In addition to the full series of NFTs, owners will be gifted a bonus NFT as part of the launch. Curry commissioned 86-year-old pioneering artist Floyd Norman, Disney’s first Black animator, to create an additional series of two storyboard animations. Norman is credited with contributions in several of Disney’s most iconic films throughout his 65-year career, and he was the subject of a Netflix documentary.

The bonus animations are based on Curry’s two favorite 3-point shots from his career. One celebrates Game 2 of the 2018 NBA Finals, when Curry connected on a Finals-record ninth 3-pointer to lead the Warriors to a 2-0 series lead against the Cleveland Cavaliers. The other highlights a late February visit to Oklahoma City in 2016 and his memorable “BANG!” game-winning shot versus the Thunder from just across half court.

“I’m honored that two incredibly talented artists, Floyd Norman and Andrea McDonald, have been able to add their creative touches to my career,” Curry said.

Two hundred of the 2974 NFTs will be gifted by Curry to the people who have helped him on his journey, including school teachers, Warriors fans, Davidson University, coaches, neighborhood friends, mentors, Stephen’s SC30 team, teammates, rivals and family.

While all moments will be priced at $499 each, the #2974/2974 NFT highlighting the record-breaking shot will be auctioned for 72 hours to the highest bidder.

Curry’s foundation has provided meals, groceries and books to families and youths in the Bay Area. It also has helped refurbish local recreation centers and build basketball courts in the region.