How to Troll an NFT Owner – Slate Magazine 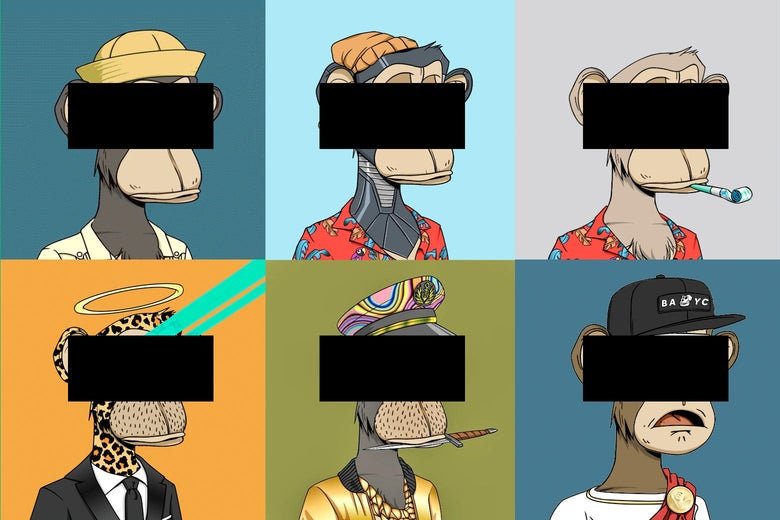 On Wednesday, a Twitter user trolled Reddit co-founder Alexis Ohanian in a way that may not have been immediately clear to all observers. The user saved a copy of Ohanian’s avatar image, a cartoon of a slack-jawed ape wearing a propeller hat, and posted it in a comment on one of Ohanian’s tweets with the caption, “Mine now.” Within the context of NFTs, by copying the image, the user was “stealing” Ohanian’s profile picture, which Ohanian had bought on the blockchain for more than $7,000 in June. Ohanian insisted he was actually happy that the user had done this. “PLEASE! Right click save as. Make a shirt of it. Share it with the world,” he replied. “Original Mona Lisa only gets more valuable every time it’s copied and shared.”

Not all NFT owners have as generous a response. Because each NFT is unique (the “nonfungible” part of Nonfungible Token), this type of cryptocurrency is often used as a certificate of ownership for items that only exist digitally, such as Ohanian’s ape cartoon. Owning an NFT indicates to everyone else on the blockchain that you also own the associated image. Yet that NFT doesn’t necessarily come with copyright or reproduction rights, so it really just entitles you to brag to everyone else that you own the original. Critics of NFTs assert that it’s ridiculous to try to claim ownership of something that can be infinitely reproduced on the internet, and pranksters will try to annoy collectors by simply copying and pasting the NFT image. Sometimes owners react as Ohanian did. Others appear to throw a fit.

Welcome to the weird world of NFT “etiquette.” In a rapidly growing community of NFT enthusiasts, where rules can be hard to define and harder to enforce, a lot of what happens is a matter of emerging social norms and, well, yelling at people.

Many NFT owners often say that Twitter interactions like those above are really just Kabuki theater—the “thieves” aren’t going to use the images for anything besides teasing, and the owner is typically feigning outrage as a form of reverse-trolling. (Some of these owners seem to be actually miffed, though.) After NFT owners began getting ridiculed for coining “right-clicker” as an insult for people who were copying their images, they said that the term was really just meant as a joke as well. Yet this supposedly performative back-and-forth between cryptocurrency boosters and their detractors does get at some real questions about what it truly means to own an NFT.

Spamming owners with copied images is the lightest violation of NFT norms. It gets a little trickier when someone tries to actually use a claimed NFT image. Collectors told me they were generally fine with others using the images they own on a social media feed or a profile background (as opposed to an avatar image) or a physical home decoration. “With a lot of people it’s OK to post a picture of an NFT,” said a collector known as Midwit Milhouse, who is known for helping to popularize “right-clicker mentality” as a crypto term. “Some people will be like, ‘I’m just sharing pictures of some NFTs that I like. I don’t own them, I just liked them. Maybe I can’t afford them. Maybe I just think they’re cool.’ ” Jeremy Torman, who designs psychedelic art NFTs, actively supports people sharing his images, even if they don’t own them or credit him, because he sees it as promoting his work and brand. “Any given band is going to be happy if their songs are playing on the radio,” he said. “Some number of people that hear the song are going to think it’s interesting and seek it out and figure out who made it.”

Using someone else’s NFT as your profile picture, though, is more of a no-no. Many prized NFTs are cartoon portraits of robots or apes or whales that seem perfectly suited as avatar images. If you buy an NFT from an esteemed collection like the Bored Ape Yacht Club, that ostensibly one-of-kind ape becomes your digital persona in a community of other Bored Ape owners. Given that some of these ape NFTs are selling for millions of dollars and have garnered a certain level of prestige—Post Malone, Steph Curry, and Jimmy Fallon have all bought them—owners will often use their ape as their profile pictures on social media, sort of in the same way that other people wear Harvard class rings or bejeweled chains custom designed by Ben Baller. “If you really want to leapfrog the clout game and you can afford it, just go buy a CryptoPunk or a Bored Ape,” said Midwit Milhouse. “A lot of people are going to listen to your opinion because they see that you have it.” Using someone else’s Bored Ape as your profile picture and siphoning away the social capital, then, crosses a line. “It’s like clout stealing. It’s like pretending to be a celebrity. It’s like catfishing.”

There aren’t really any concrete mechanisms stopping people from trying to steal someone else’s NFT avatar. Sure, the blockchain keeps an ironclad record of who actually owns the unique crypto token at any given moment, but it’s unlikely that many people are going to check who the rightful owner is every time they see one of these avatars as a Twitter or Discord profile picture. Twitter is currently developing a feature that will verify a user as the actual owner of a certain NFT, but in the meantime, the community has to rely on callouts and social pressure to root out imposters. “Dogpiling is pretty effective nowadays,” said Midwit Milhouse. “Some of the really active communities, like Bored Apes or Lazy Lions, can dogpile on someone pretty easily.”

The most serious violation of the NFT code of conduct, however, is to profit off of an NFT that doesn’t belong to you. People looking to make a quick buck will often download someone else’s image, create their own NFT to associate with the copy (which may have been very slightly modified), and then try to sell it on a marketplace like OpenSea or Nifty Gateway—a scheme known as “copyminting.” Torman said that 10 unauthorized copies have been made of his collection for sale elsewhere. “Copyminting hurts artists because it reduces consumer confidence in NFTs,” he said. Though he is the original artist, he says it would be difficult to bring legal action against the bootleggers since they’re usually anonymous, and there isn’t much established caselaw around NFTs. Torman instead contacts the marketplaces themselves, which are usually responsive to takedown requests, though he maintains that it would be better if these platforms instituted automated systems that flag copies automatically. The NFT community also hasn’t really settled on what constitutes fair use in the crypto realm, or how much you need to transform a work before it’s socially acceptable to sell it as its own NFT. Evan Keast, a founder of the popular Doodles NFT collection and brand, says he’s generally fine with people creating derivative works based on the art he sells as long as they first run it by his organization. His main concern is that these derivatives could be mistaken as being officially associated with Doodles, opening people up to potential scams. “The crypto space is very cowboy-ish right now,” Keast said. “It has positive effects obviously to open-source creativity, but there’s also those scary aspects where bad actors can really take advantage of people.”

There’s been a recent trend of fake accounts displaying coveted NFTs so that people will fall for cryptocurrency giveaway scams. (For example, a scammer might offer to give out valuable NFTs, but asks the target to send over a little bit of cryptocurrency first just to confirm their digital wallet address. The target sends the money, and the scammer disappears.) Midwit Milhouse says he gets five direct messages per day on Discord from scam accounts whose profile pictures often feature expensive NFTs that very they likely don’t own. Keast says he’s flagged 50 to 100 scam accounts with fake Doodles to Twitter, and has even taken to calling out fraudulent accounts on his feed. “Responding on a social media platform is never going to get you the results that you intended,” said Keast. “I tried my best to combat some of the ones that were spiraling out of control, that were getting up to 20,000 retweets and clearly had really bad intentions.” Of the two accounts he called out in late October, one has vanished while the other is still up.

But ultimately, many crypto boosters think that what may seem like a weakness in the technology is actually a strength: NFTs make it possible for art to be both profitable and freely available. “Everydays,” an NFT collage from the artist Beeple that sold for more than $69 million in March, might normally be stowed away in a bank vault or mansion attic were it a physical rendering. Because the collage only exists digitally, identical copies can proliferate across the internet for everyone to interact with and enjoy. Once you start talking about what you can or can’t do with someone else’s NFT image, though, the traditional definition of ownership starts to conflict with the openness that collectors claim to champion. You might even say that the real function of the nascent etiquette forming around NFTs is to preserve the accessibility of these works online while justifying the vast sums that collectors are paying for them.