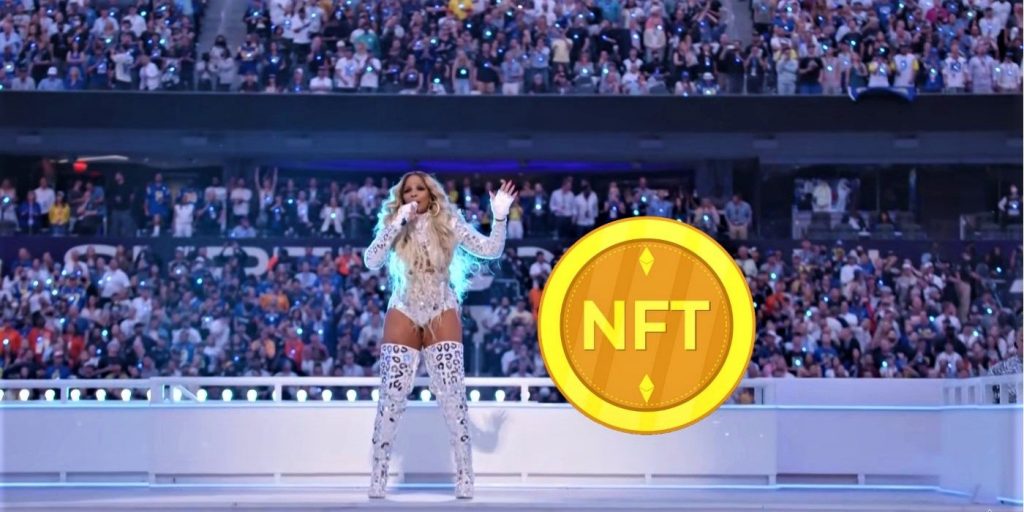 Singer Mary J. Blige’s glittery Super Bowl outfit will be digitally immortalized via NFTs. Here’s how much it costs and what buyers can do with it.

The glittery garb singer Mary J. Blige wore during her 2022 Super Bowl LVI performance is now being immortalized and sold digitally via NFTs. Non-Fungible Tokens are used for various things, from being used as digital property investment to even protecting endangered animals. Even Jack Dorsey’s first tweet was made into an NFT.

When it comes to the world of fashion, their use-cases get a bit more visually creative, with companies like Dress X betting big on these digital assets. Dress X describes its digital store as the “first and largest marketplace for digital fashion.” With so many companies getting into the NFTs, Dress X sets its store apart by selling trendy and famous fashion pieces that can be owned and worn digitally through Augmented Reality via its app. Now it’s adding Blige’s sparkling dress to its catalog.

The outfit itself was the product of Los Angeles-based Norwegian designer Peter Dundas, who was responsible for creating costumes for previous Super Bowl performers such as Shakira. Now, Dundas is collaborating with Dress X to bring Blige’s dazzling get-up to the public market, according to Vogue. The fashion designer describes the partnership as the “next step in technology,” which he wants his fashion to become a part of. Plus, buyers won’t just get to own it. They would also be able to wear it, but for a steep price.

NFT collections often go for prices that can be pretty shocking, and the digital version of Blige’s glitzy get-up is no different, as it’s being auctioned off at Dress X’s Crypto.com digital store. Interested buyers can get it in various forms through Dundas’ ‘The Big Game’ collection, albeit for a limited time. This includes Dundas’ concept art called The Big Game Bling Sketch and The Big Game Feather Sketch, which come with a wearable AR hat, along with $100 and $50 price tags, respectively. As for the outfits themselves, there are two variants, The Big Game Bling Outfit and The Big Game Feather Outfit, which includes a feathery coat that goes over Blige’s garish garment.

The ‘Bling’ outfit has 10 editions minted, and all are already sold out. However, resellers are offering them to the highest bidder, with the first Edition going for as high as $1,500. On the other hand, The Big Game Feather Outfit only has one Edition, costing a whopping $2,500 as its starting bid, which also includes two passes to Dundas’ next party, and two tickets to the designer’s show during New York Fashion Week happening in September. It might not be a practical purchase, but for those who simply have to own it but can’t get the real deal, at least they can always go for the next best thing, an NFT.

Kyle Encina is a writer with over five years of professional experience, covering topics ranging from viral entertainment news, politics and movie reviews to tech, gaming and even cryptocurrency. During his free time, he indulges in composing melodies, listening to inspiring symphonies, physical activities, writing fictional fantasies (stories) and of course, gaming like a madman!