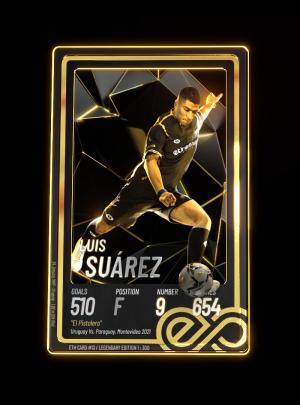 [LOS ANGELES] Ethernity, the original authenticated NFT platform (aNFT) welcomes one of the greatest strikers of all time to its platform, Luis Suarez. When you think of Luis Suarez you think of high-end soccer, a keen eye for offense and a precise shot from Uruguay. Suarez has raked in over 500 career goals, multiple “Golden Boots,” 19 major trophies from league titles to the Champions League, to Copa America.

On November 13th for 72 hours, Ethernity is auctioning off an exclusive 1 of 1 NFT of Suarez’s boots, reimagined by top NFT artists, Visual Lab, who have symbolically cast Suarez’s shoes in solid gold, showcased in a large glass football gallery. Additionally, fans will have the opportunity to purchase an interactive NFT that will visually adjust according to Luis Suarez’ recent performance; meaning that at one point he can be cheering in a grand and sparkling golden frame while the next moment the card can turn into a rainy bronze reflection of his last match. Ethernity’s memorable trading card design returns for the ‘Legendary’, ‘Epic’ and ‘Common’ Luis Suarez drop.

The supremely made 1 of 1 auction item, A Gilded Match, honors Luis Suarez as a pre-eminent striker on the world stage. For ‘A Gilded Match’ the artists symbolically cast Suarez’s shoes in solid gold, showcased in a large glass football gallery. Light beams dancing to the dynamics of an exciting match, cast from all directions, disperse in vibrant colors creating a unique and calming atmosphere. The 1 of 1 auction winner will receive an “Unlockable” digital display frame from Infinite Objects.

The interactive NFT card, The Luis Suarez: #IRCs21, has been created with a hyper-realistic 3D scan of Luis Suarez and the artist has carefully animated him in iconic moments or replications of a moment in a match. Interactive NFT’s visually adjust according to Luis Suarez’s performance; meaning that at one point he can be cheering in a grand and sparkling golden frame while the next moment the card can turn to a rainy bronze reflection of his last match. The NFT will change according to gameplay after every match. The standard-setting and 1 point turn blue. Two points and the NFT turns to gold. Zero points and it’s cast in bronze. One winning buyer of The Luis Suarez: #IRCs21 will be drawn to receive an Uruguay national team jersey signed by the striker himself.