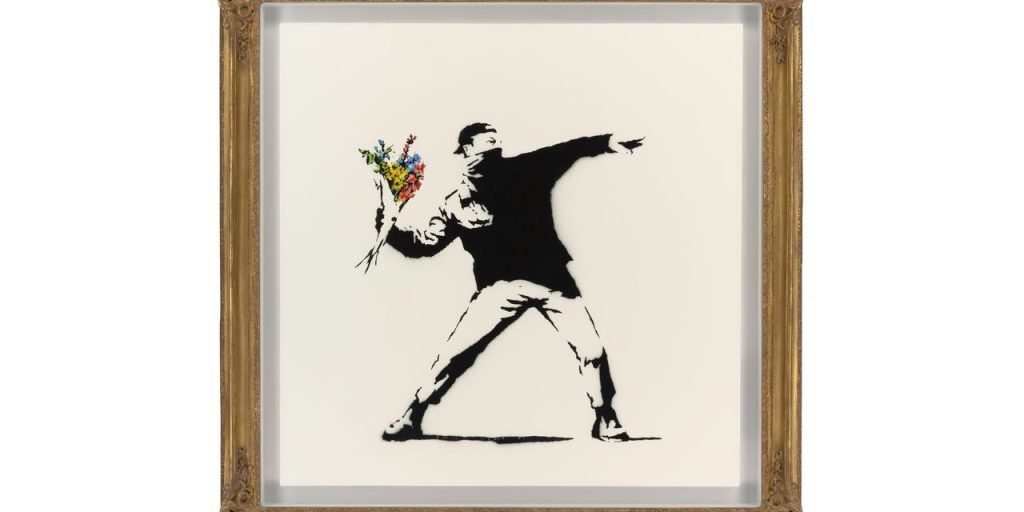 Particle, a platform for nonfungible tokens straddling fine art and technology that was co-founded by former Christie’s post-war and contemporary art chairman Loïc Gouzer, announced this week that Banksy’s Love is in the Air is the first work it will digitally divvy up and sell at auction.

“Banksy has turned the art world on its head. Widely regarded as one of the most iconic creators of the 21st century—his daring, humanitarian nature and strong belief that art should be for everyone reflects the mission at Particle, making this masterpiece symbolic to launch the platform with,” Gouzer said in a statement.

Particle paid US$12.9 million at a Sotheby’s auction in May for the painting depicting a protester poised to lob a bouquet. “The Flower Thrower,” as the work is also known, will be segmented into 10,000 particles using a 100-by-100 grid and sold to bidders as NFTs.

“Each particle will cost approximately US$1,500,” and bidders can “definitely” buy more than one, Particle CEO Harold Eytan said in an email. Interested buyers can apply from Dec. 13 and sign up for the waitlist before the primary sale beginning the week of Jan. 10-14.

Buyers can’t choose their particles, which are randomly allocated. Nonetheless, they will receive grid coordinates for their purchase and a card illustrating ownership.

“Once you are an owner of a Particle it is up to you to do what you please with it,” Eytan says, adding that if that means selling it “they can do so via a variety of secondary marketplaces, or on Particle’s own marketplace.”

Love Is in the Air’s mob ownership recalls efforts by the cryptocurrency collective ConstitutionDAO, which raised US$40 million through crowdfunding, to buy a rare copy of the U.S. Constitution at Sotheby’s last month. The group was outbid by Citadel CEO Kenneth Griffin.

R. A. Farrokhnia, Columbia Business School professor and executive director of the Columbia Fintech Initiative, regards Particle’s Love Is in the Air auction “as a natural extension of the theory of distributed ownership that we have been formulating and technologies we have been building for the past five to ten years. Now we will see how the real marketplace will behave and how participants will act.”

To Eytan, “group ownership means community and shared common values. This is a new collective experience, one that redefines how people enjoy fine art,” he says. “There is this concept that ownership increases the enjoyment of art. It’s not really that it puts luxury in everyone’s reach per se, but allows a wider community to express themselves via collecting fine art masterpieces.”

Love is in the Air will be on view at “First Fridays” on Dec. 3 at the Institute of Contemporary Art, Miami, during Miami Art Week. After the auction, the nonprofit Particle Foundation will receive the actual artwork along with 1% of the particles in order to be, according to a release, “a protective shard and ensure no one person can envision claiming possession of the physical painting.” The foundation will also get a share of the royalty revenue contributing to that assurance.

“The foundation will never sell the physical work of art,” Eytan says. “The whole point of this project is to build the greatest collection in the world, owned digitally by the community, and preserved physically by the foundation.”