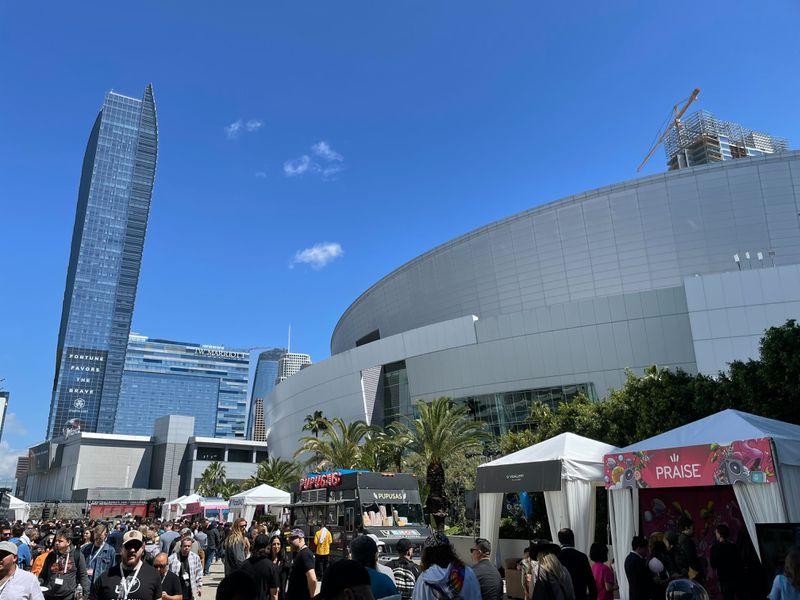 Non-fungible tokens (NFT) and their biggest fans headed west this week for NFT LA, the latest gathering of JPEG enthusiasts during the technology’s extended coming-out party, now in its ninth month.

The week began with warm Los Angeles rainfall, dampening the conference’s patrons as they made their way to the inescapable beginning of all great NFT conferences: a badge pickup line winding around a city block.

The NFT show is no longer a stranger to the road. Believers in this newly popular form of digital asset have flocked en masse to various NFT-focused events in the past half-year, beginning with NFT.NYC in November and passing through Miami for NFT Basel. Even this year’s edition of South by Southwest in Austin, Texas, had a major NFT presence. (I was fortunate enough to attend all three.)

From the moment I arrived in downtown LA, NFTs were in the air. Bored Ape Yacht Club holders flew around town in packs, hoodies blowing in the wind, their ape chariots (electric Bird scooters) fast as ever.

Uber drivers shilled projects on rides to and from satellite events, handing out QR codes for collections with names like Bored Punk Weed DAO. Outside the conference center, a woman performed an acoustic rendition of Randi Zuckerberg’s “#WAGMI.”

The Crypto.com branding on the Staples-adjacent convention center was a monied reminder that crypto’s influence would be sticking around beyond the week’s festivities.

It was new and yet it wasn’t. Compared with its predecessors, NFT LA didn’t offer that much that was distinct; but for the first time, there seemed to be an expectation that distinct was needed.

The space has found itself in a pivotal moment worth unpacking, lightyears ahead of where it was just months ago.

From Yuga Labs’ recent acquisition of CryptoPunks and its potentially unsettling bid for centralization to growing regulatory concerns on the legality of NFT road maps to the recent explosion of music NFTs, many are left with the lingering feeling that the space’s next moves will be important ones.

The week started with an opening panel headlined by entrepreneur Mark Cuban. After Cuban’s typical takes on virtual land and a bit of shilling for his own projects, the celebrity investor brought out a series of surprise guests to the stage, which included the cast of “Entourage” and actor Charlie Sheen.

“I’m going to be honest, I don’t know practically anything about NFTs,” Sheen said to the crowd. “Or at least not as much as most of you.”

The joke, while well-received in the moment, underscored some of the frustrations attendees would have with the conference, an event marketed to NFT experts as much as newbies.

There were other moments during the week that left people with more questions than answers. Why is Waka Flocka Flame rapping about NFTs? Is that Ja Rule? What has gone wrong in the careers of these people that they now stand before us, presented as unenthused ambassadors to a movement they seem to care little about?

Maybe that’s a cynical way to look at it, or maybe that’s just LA. Nonetheless, these questions would go unanswered.

The backdrop of Hollywood, too, did bring out a certain side of NFTs that has been unsettling to even the crypto native. The promotional, commercialized aspects of the tech, with the conference at times feeling more like the Jimmy Fallon Bored Ape segment than the vision of a Web 3 purist.

That’s not to say there wasn’t a sufficient display of innovation during the week. A metaverse installation that combined virtual reality with sensory feedback was a fan favorite.

The major news to break during the conference’s first day was a $625 million exploit of the Ronin Network, home to the popular NFT game Axie Infinity.

The game’s founder, Jeff Zirlin (aka The Jiho), was able to speak of the historically large hack on stage, with details of the aftermath finding their way into people’s conversations for the rest of the week.

Members of the Axie community who made the trip remained in great spirits. At a satellite meetup at a local bar attended by Zirlin, over a hundred Axie players could be seen socializing and taking pictures with one another, the hack seemingly far from their minds.

“You would really have no idea that this horrible news just happened if you didn’t already know,” one Axie user told me at the event. “I’m just happy we can all be together and hang out. That’s what this week is all about for me. We love the game and the community it’s created.”

Sky Mavis, the company behind the game, pledged to reimburse all affected users on March 30.

There was another sentiment that’s been slowly building in some corners of the space since NFT mania began last summer, and it’s that maybe not all of us should make it.

I had this realization during the performance of an ApeCoin rap song in between talks on the main stage, giving me the feeling of being trapped in a promotional email for the next hot mint. There has always been a strong link between people who say WAGMI (“we’re all gonna make it”) and those who, without irony, don’t make it and there’s no place that phenomenon is more public facing than at NFT conferences.

Nonetheless, the conference had its thrills, like a performance from Nelly, free pizza from PizzaDAO and afterparties in the Hollywood Hills.

NFT conferences more than anything capture moments in time. NFTs have been said to be in their “moment” for much of the past year, but this conference, more than others before it, reflected just how widespread that moment has become.

This is no longer a movement happening within the confines of Crypto Twitter and Discord – its ideas have spread to talent agencies, celebrities and musicians on the largest stages. Where it’s headed no one knows, but its momentum – especially in LA – has become hard to ignore.