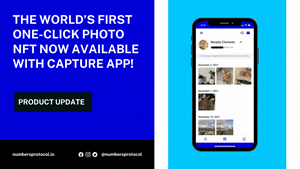 NFT listings on CaptureClub will be free until December 31, 2021.

Capture App promises to introduce new innovations to the growing photo NFT trend by marrying NFT accessibility with the trust and security of Numbers’ Capture, Seal, and Trace technology. Capture App allows anyone with a smartphone to easily create NFTs with just a few clicks. Users can either download the latest version or update Capture App to version 0.43.0 to experience the latest feature.

In addition to the latest feature, the team will be integrating Network Actions and $NUM transactions into the Capture App in the near future. Having officially launched Numbers Protocol’s decentralized photo network as well as $NUM token in November, Numbers aimed to provide users with token utility as early as possible. As the native protocol token of the Numbers Network, $NUM can be used to pay for services within the network, also known as Network Actions.

Sofia Yan, Co-Founder and Chief Growth Officer of Numbers, said, “We’re extremely excited to release Capture App’s latest feature. We believe that this will be a paradigm shift in the way that people share, buy, and sell visual media online. In addition, the ability to create an NFT from a photo or video in just one click is something we believe will help make NFTs mainstream.”

The first Network Action is NFT listings on CaptureClub, Numbers’ first in-network NFT marketplace, which contains a rich collection of digital art and images. Listings can be made in-app with just a few clicks and will be free until December 31, 2021. Starting January 1, 2022, all NFT listing fees will be paid with $NUM.

Coinciding with Network Actions is the official integration of $NUM into Capture App’s in-app wallet. This change signals more potential utility for $NUM within Capture App in the form of more Network Actions and transacting with $NUM to acquire Captures (photo NFTs).

This update also showcases Numbers’ commitment to Web 3.0 decentralization and asset registration. Now, all creations in the Numbers network will automatically be stored to IPFS and registered with a unique Content ID (CID).

To encourage users to join, Numbers will be doing an airdrop to Capture App holders in the following weeks. More information about the airdrop will be released on Numbers’ social media channels shortly. In addition, there will also be a bounty program for photographer influencers.

In the near future, Numbers plans to integrate more marketplaces into its network, which will provide additional options for its users. Other developments include the ability to use $NUM within the network to buy, trade, and send NFTs made with Capture App, as well as the ability to trade NFTs on social media and stock image sites to maximize adoption.

Capture App is the world’s first blockchain and photo NFT camera app and is also the primary network tool of Numbers Protocol Decentralized Photo Network. Capture App aims to solve real problems in a space littered with violations and inactions by equipping everyday users with the means of easily securing their own creations through Numbers’ innovative Capture, Seal, and Trace protocol.

Numbers is building a decentralized photo network for creating community, value, and trust in digital media. Its Numbers Protocol redefines the nature of digital visual media as assets and is the backbone of a suite of tools for registering and retrieving photos and videos in the Numbers network — the Capture app, Seal API, and Trace website — plus the CaptureClub marketplace and a proprietary NFT Search Engine. Numbers champions the purity of digital media and enables people to think more critically about the interactions between our images and the world around us.

For the latest updates and announcements, follow Numbers on these channels: 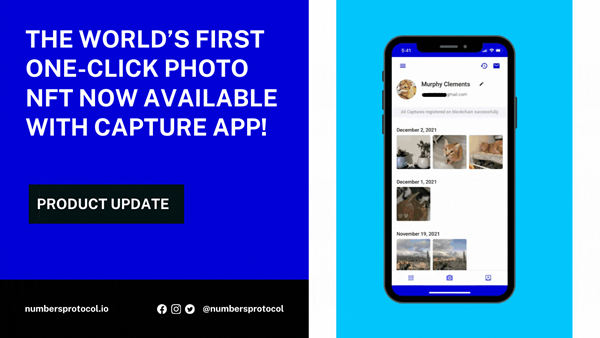