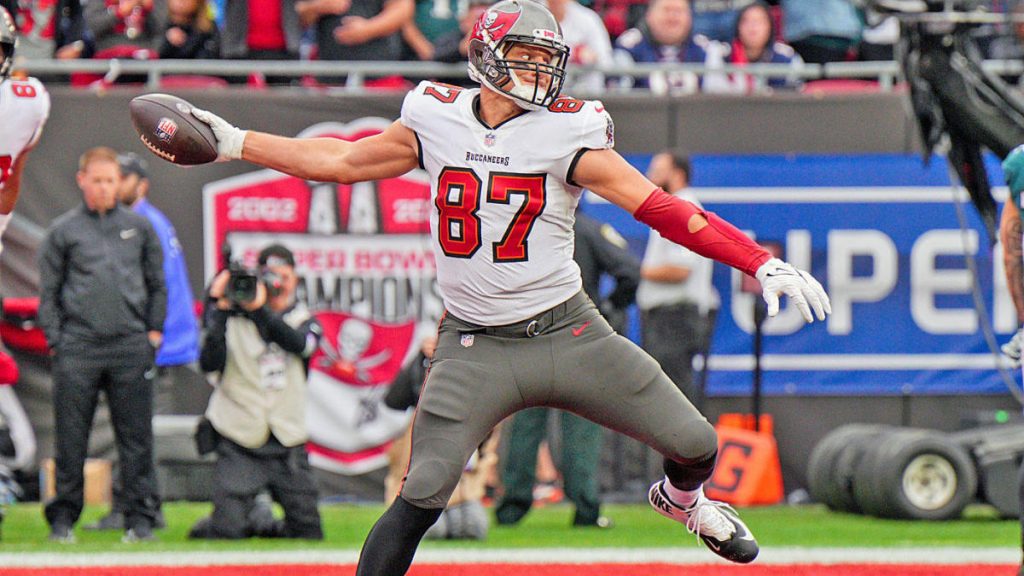 Free agency is on the horizon around the NFL, a decision Rob Gronkowski will face next week as the future Hall of Fame tight end is set to venture on without catching passes from Tom Brady as the No. 1 quarterback for the first time. If Gronkowski decides to return to the NFL, the free agent tight end will certainly have interested teams.

An injury-riddled season caused Gronkowski to miss five games, but he still finished with 55 catches for 802 yards and six touchdowns. He also had nine catches for 116 yards and a touchdown in two postseason games. Gronkowski is fifth in NFL history for receiving yards by a tight end (9,286) and third in receiving touchdowns by a tight end (92). His 98 catches for 1,389 yards in the playoffs are the third-most by any player in postseason history, and his 15 receiving touchdowns are the second-most in playoff history.

Gronkowski also has been investing in NFTs, teaming up with Tom Brady’s co-founded NFT company, Autograph, to launch his newest collection. “Super Gronk” was released last month and features an animated Gronkowski “throwing a defender through a wall — out of the club.” Details about the “Super Gronk” collection can be viewed on the Autograph website.

In an interview with CBS Sports, Gronkowski discusses his “Super Gronk” collection and teaming up with Brady again. He also opens up on his impending free agency and hints at a possible destination for 2022.

We discussed your foray into NFTs before, but can you describe the “Super Gronk” collection? What type of NFTs do you have in store for this collection?

Gronkowski: “The collection is basically a hero character of me and how people might envision me as a Hulk-type player on the field. That’s really where it came from — you know, the big muscles and what not. ‘Super Gronk’ is a hero, he’s running people over, he’s too strong to tackle, entertaining the fans, and just going nuts out there.

“Autograph does such a great job at creative — just making things feel so authentic and relatable to myself, especially with the ‘Super Gronk’ collection. It’s a superhero cartoon character, it’s a new space, and I think it’s going to be a big part of how fans can connect deeper to their favorite icons.

You’ve been collaborating with Tom Brady and “Autograph” in the past? What do you think is the future of NFTs and where do you and Tom see them going in 5-10 years?

Gronkowski: “Tom came to me with the idea of collaborating before a preseason game, when we were in the treatment room doing pliability work. He brought it up to me and told me all about Autograph and NFTs, about the collectibles, and I just resonated and loved the passion he has for it.

“Whenever Tom does something and we talk about it, he’s so particular and on point with all the fine details and that’s what makes him the best at whatever he puts his mind to and I respect that.”

If you decide to retire again, how much further are you going to dive into the NFT business? Do you have other plans lined up for life after football?

Gronkowski: “I’m really just getting into the crypto/NFT game, but from what I’ve been seeing and hearing it’s just going to keep taking off and it’s great to be part of it now and see where it goes. I wouldn’t say we’re advisors or anything, but it’s an exciting space to be sure.”

Are you any closer toward a decision about what you want to do in 2022?

Gronkowski: “I’m just taking it day-by-day for now and taking some time to relax a bit.”

What would urge you to return to the NFL for another year?

Gronkowski: “It’s been an unbelievable ride, and I have a lot of support from my teammates. I have so much love for all of them.”

Are there any quarterbacks you would be interested in playing with other than Tom Brady? What do you look for in a quarterback as a pass-catcher?

Gronkowski: “I love the way Joe Burrow presents himself on the field. Regardless of the outcome, the Super Bowl was a great game and he left his best out there.

“I’ve watched him since college, he’s confident in the pocket, and he just slings it out into the play. I love his swag, he’s killing it right now and I think we’re going to see a bright future ahead for him.”

As a free agent, do you get excited about picking the team you want to go to? Can you describe how hectic free agency is as a player? Do you feel like you want a deal done quick or do you like the process to be drawn out?

Gronkowski: “There’s so much potential out there, and I’ve played for incredible teams in my career. There’s a lot to look forward to, and all I can say is 2022 is going to be a hell of a year.”