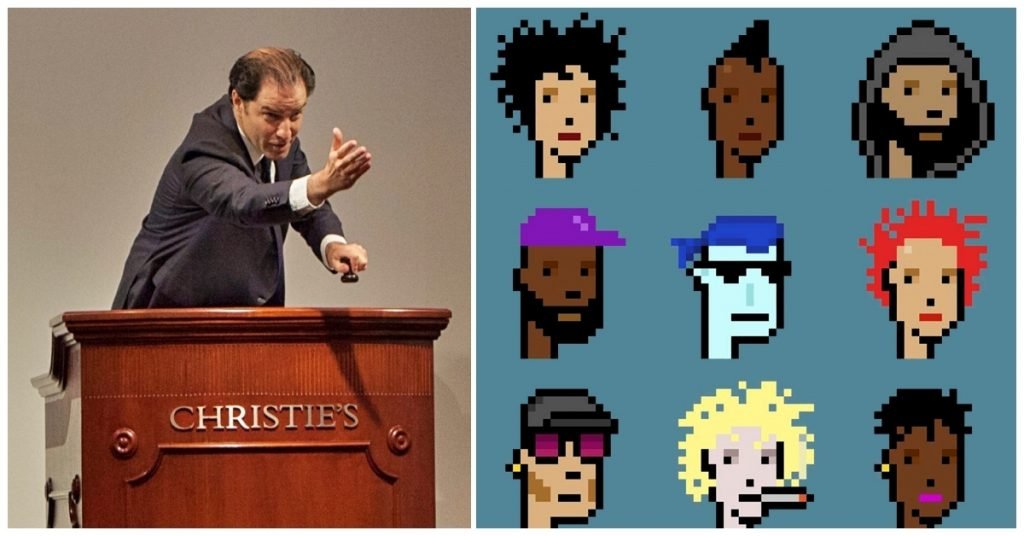 The NFT wave of late has swept not just the art circles, but seizes headlines across the financial markets. And it is no longer fueled by just the tech-savvy community on the online NFT marketplaces, major auction houses such as Christie’s, Sotheby’s, and Phillips all tap into the digital art world, first with online sales, now live auctions – not just any auction though, the blocky images are gunning for the marquee evening sale.

For the first time ever, a set of nine NFT-based CryptoPunks will go under the hammer live at Christie’s 21st Century Evening Sale in New York, scheduled for May 11. Alongside artworks by such celebrated stalwarts as Jean-Michel Basquiat, Gerhard Richter, and emerging contemporaries such as Christopher Wool and Amoako Boafo.

NFT, or non-fungible token, is the blockchain technology behind cryptocurrency. From a secondary art market perspective, transaction records are permanently secured in a time-stamped and immutable blockchain, making them impossible to alter. It verifies the authenticity and provenance, as well as the rightful ownership of an artwork.

Christie’s made its first foray into blockchain back in 2018, as the house hosted a summit to explore both opportunities and challenges presented by the nascent technology. This March saw the standalone online sale of Beeple’s collage, titled Everydays: The First 5000 Days, which was sold for a whopping US$69.3m, making Beeple now the third most valuable living artist, trailing just behind Jeff Koons and David Hockney.

As with the Beeple sale, the auction house will again accept payment either in USD or ether cryptocurrency.

The status given to an artwork consigned to an evening sale is like a halo. While daytime sales offer more lots – sometimes by up-and-coming artists, those that make it to an evening sale are usually estimated to sell at a higher price and are synonymous with top consignments.

While the show-stopping record set by Beeple’s collage has cemented the role of NFT creations in the realm of the traditional art industry, having an NFT work’s live auction debut in an evening sale is all the more attention-grabbing.

The theatrical evening sales are often where records are reset

Among the three major auction hubs of New York, London and Hong Kong, CryptoPunks will be gracing the New York saleroom, where many of the world’s most important works are seen.

The upcoming 21st Century Evening Sale seems to be no exception. The amazing lineup includes two phenomenal works by Basquiat – the highest-grossing American artist in history, which carry an estimate of over US$50m and US$10m to 15m respectively, as well as an abstract by Gerhard Richter, estimated at US$9m to 12m.

CryptoPunks carries an estimate of US$7m to 9m, the sixth highest in the sale, ahead of the works by Damien Hirst, Adrian Ghenie, Banksy, and George Condo. Is the rather tightknit world of NFT art ready to go against canonical greats and take the industry to a new era?

The collection of 24 by 24, 8-bit-style pixel art images, at first glance, might not fit the bill as an extraordinary masterpiece. Compared to the talk-of-town lots by Beeple and Mad Dog Jones, the pixelated work definitely stands on the simplistic end of the spectrum.

Beeple’s Everydays: The First 5000 Days is a collage of images created everyday by Beeple, for 5000 days straight, spanning from abstract, fantastical, grotesque to political issues. The animated artwork in MP4 format, REPLICATOR by Mad Dog Jones, on the other hand, generates new artworks every 28 days – a ground-breaking crypto concept that allows the digital artwork to replicate itself.

The fly that unexpectedly landed on former US Vice President Mike Pence’s head during the 2020 vice-presidential debate, inspired Beeple to one of the images in Everydays

The first generation REPLICATOR by Mad Dog Jones, which went for US$4.1m at Phillips New York

CryptoPunks’ existence goes way before the whole NFT bonanza came into the picture. Now claiming the top spot on OpenSea, the largest NFT marketplace worldwide, though CryptoPunks were initially given out for free.

Began as a casual experiment back in 2017, the New York-based software company Larva Labs, co-founded by Canadian technologists Matt Hall and John Watkinson, created a pixel-art character generator that randomly generated a total of 10,000 pixelated Punks among a mix of characteristics.

Each Punk has a unique combination of randomly generated features

Once minted, 9,000 of the 8-bit-style pixel characters, which could have been used for a smartphone app or game, were offered for free and could be claimed by anyone with an ETH wallet. The remaining 1,000 were kept by Hall and Watkinson, “just in case it becomes a thing,” as Hall put it in an interview.

Each Punk has its own page, detailing its features, attributes that make them unique from one another, and transaction history – pretty much as close to NFT’s history as it gets to be regarded as the pioneer of today’s cryptoart movement.

Within a few days of the project launch, all 9,000 Punks were quickly claimed, and it all happened four years ago, before OpenSea was established.

There are 6,039 male Punks, 3,840 female Punks. While no two Punks are exactly the same, some of them share similar attributes like rosy cheeks, buck teeth, muttonchops, topped with different combinations of accessories, such as shades, earrings, hoodies, bandanas, and caps. Inspired by the punk scene in 1970s-era London, quite a number of Punks possess stylistic nods like mohawk hairstyle and choker.

Three of the CryptoPunks characters offered in the sale, numbers 30, 635, and 602

The transaction numbers of CryptoPunks are undeniably surging. According to NFT tracking site CryptoSlam, last week’s sales volume was 11,324 ETH – the equivalent of about US$33.3m and the most expensive Punk sold was a headband-wearing alien (#3100), which was sold for a whopping US$7.58m. As of May 5, the most affordable Punk available (#4950) is going for US$64,920 on Larva Labs.

As with other genres of art, the vast price difference lies in the scarcity of the work. Think Sanyu’s Five Nudes, which fetched HK$303m (US$38.7m), the painting’s sheer size aside, the work is the only known work in Sanyu’s entire oeuvre to feature five nudes.

Among the 10,000 Punks, some are rarer than the others. Larva Labs tweaked the software algorithms to generate the rarer non-human characters including 88 green-skinned zombies, 24 hirsute apes and nine light-skinned aliens. Non-human Punks account for 10 out of the top 12 highest valued Punks listed on the website.

Each punk in the series is given an edition number and the set of nine Punks on offer in the upcoming sale are all of the sub-1,000 series, including a female Punk with wild hair (#2) and a bandana and shades wearing alien Punk (#635), the only alien with a sub-1,000 series number.

Also embracing the NFT art craze is Japanese contemporary artist Takashi Murakami, who turned his iconic sunflower motif into NFT works inspired by CryptoPunks, which were made available on OpenSea.