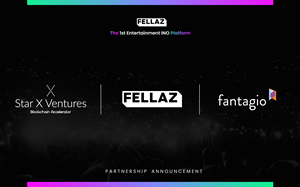 Fellaz, based in Singapore, is the first global blockchain project Star X Ventures is directly involved in. Fellaz offers a comprehensive NFT service from the ground up for commercial partners, enabling entertainment businesses with high interest in entering the NFT space to easily identify and develop a relevant NFT product to penetrate the market.

NFT is a non-fungible token and unlike other cryptocurrencies, an NFT carries a digital signature that makes it impossible for one NFT to be interchanged with another NFT, making it an effective asset that represents real-world objects. Due to this characteristic, NFTs are seen as a crucial technology that finds utility in the arts and entertainment sector, where authenticity and proof of ownership translate to value. It is not coincidental that there is no shortage of major domestic and foreign entertainment companies attempting to promote their business by signing partnerships with various blockchain organizations.

However, due to the complexity of blockchain technology and the nature of the industry,  traditional entertainment businesses that want to enter the space are faced with extremely high technological barriers to entry. Fellaz as a solution fills this void.

Fellaz is currently working on an NFT project and will collaborate with a South Korean entertainment juggernaut, Fantagio, a listed company, as its first partner. Fantagio, as a comprehensive contents company, engages in celebrity management, music album production, and drama production. The most prominent actors and musicians include Ong Seong-wu, Im Hyun-seong, as well as idol groups such as Astro and Weki Meki.

Brian Han, CEO of Star X Ventures, said, “Fellaz is one of our initial projects at Star X Ventures, where we participated not just as an investor but taking part from the planning phases. We anticipate great success, and I can confidently say that Fellaz will become a dominant first mover in the NFT space worldwide with its unique position as a B2B entertainment NFT launchpad.”

The first NFT collection to be released by Fellaz in collaboration with Fantagio is scheduled to be officially released in May.