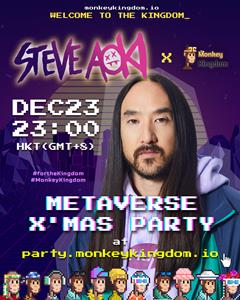 TOKYO, Dec. 20, 2021 (GLOBE NEWSWIRE) — NFTs are tokens that we can use to represent ownership of unique items. As proof of ownership, NFTs can include digital arts and collectibles to real estate and other physical assets. True and traceable ownership’s nature empowers content creators far greater than ever before.

The third quarter of 2021 alone saw over $10 billion in NFT trade volume across blockchains, a substantial increase from Q2’s $1.2 billion. While NFT adoption in gaming has already reached a certain maturity, for example concerning the trade of in-game objects, different other industries, especially those involved with the production of digital content such as music or video, are experimenting with the technology.

NFTs are a rising phenomenon in APAC; the collectors can bring their NFTs to exhibitions and online auctions.

Solana, a blockchain network that launched in 2020, is an open-source and public blockchain platform. Solana has many technological breakthroughs; it allows its users to create, mint their own tokens, NFTs as well as securely store them with low cost and fast throughput. Monkey Kingdom is now one of the biggest NFT projects on Solana.

The Monkey Kingdom consists of 2,222 algorithmically-generated Sun Wukong-inspired NFTs hosted on the Solana platform: home to the fastest-growing blockchain ecosystem in the realm of cryptocurrency today. The artwork itself is based upon the legendary Monkey King – the titular character of the 16th-century Chinese novel Journey to the West, best known for his supernatural abilities and whimsical escapades. A cultural emblem widely recognized and appreciated within global Asian communities today, Sun Wukong epitomizes wisdom, optimism and perpetual youth – concepts that resonate with generations old and new alike.

Monkey Kingdom’s underlying mission is to not only foster a sense of inclusivity within the NFT community but also to act as a means of amplifying Asian voices and experiences worldwide within the Web 3.0 ecosystem.

Since its recent launch on November 27th – just last month – the project has skyrocketed in popularity: it has grown to become one of the most successful NFT projects in the world. It has become one of the first massively successful NFT projects launched in Asia and is currently compared to the likes of Bored Ape Yacht Club and Cryptopunks. Its global traction has been facilitated by the support of prominent Asian celebrities along the way, including the likes of Steve Aoki, JJ Lin, Sunny Wang, Dizzy Dizzo, Ian Chan (from Hong-Kong based boyband Mirror) and Verbal (founder of prominent streetwear brand AMBUSH), to name a few.

Following the success of the project’s initial launch, the highly-anticipated second drop will be taking place on December 21st with the introduction of Baepes – Female Wukong Apes. All proceeds garnered from the initial sale of the NFT will be donated to a charity of choice, with the goal of supporting Asian communities worldwide.

To celebrate the success of the project thus far and extend appreciation to the growing community, Monkey Kingdom will be partnering with world-renowned DJ Steve Aoki this month to host the Monkey Kingdom Christmas Party on Cryptovoxels — a digital metaverse acclaimed for its immersive high-end events and experiences. The digital party will take place on a large, temple-inspired stage built on the Cryptovoxels platform.

Ranking amongst the world’s Top Ten DJs last year, Steve Aoki is armed with an array of virtuosic credentials. The Grammy-nominated DJ, record producer, and record executive in the international electronic music industry will be spinning a 60-minute set on the 23rd of December at 23:00 HKT. Prior to his set, Taiwanese artist Dizzy Dizzo will also be opening the show with a spectacular performance.

The Monkey Kingdom would like to extend a warm invitation to all holders and members of the community, as well as any guests and fans that simply wish to join the festivities or tune in to view the performance – ushering in the holiday season as a united collective.

A photo accompanying this announcement is available at https://www.globenewswire.com/NewsRoom/AttachmentNg/a5feeee9-1aad-47f2-9481-bb8e4730d69d 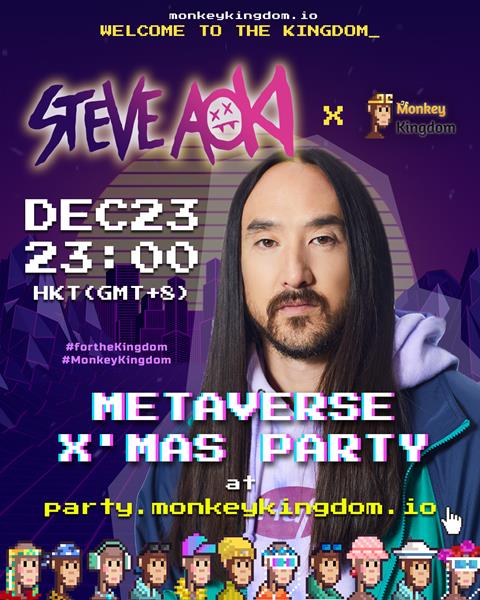