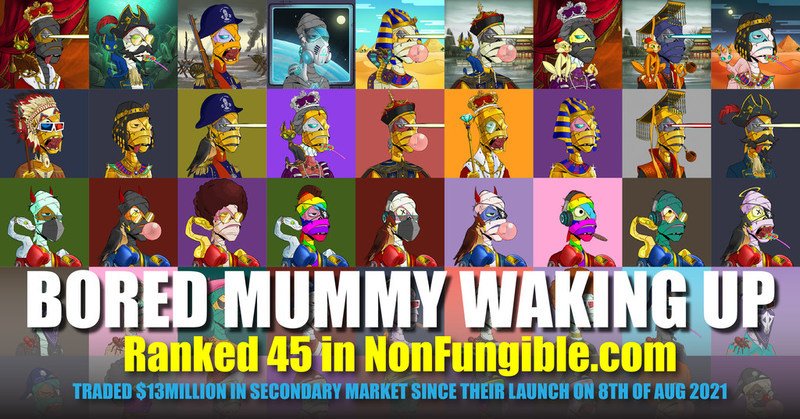 NEW YORK, Nov. 19, 2021 /PRNewswire/ — Bored Mummy Waking Up (BMWU) is taking the world by storm with its eccentric digital artworks which feature surprising historical twists. Within a short span of just three months since its official launch on August 8th, 2021, BMWU has started to make history of its own in the NFT world with a total sales volume of 3,300 ETH and the highest sales record of 10 ETH for a single BMWU sold. The number of unique BMWU holders also quickly grew to 3,723 within its first quarter of operations.

Despite the overnight success, BMWU encountered its very first stumbling block within the first month of its launch when a technical issue took place between its server and OpenSea. A second incident struck just a week later when its Alicloud server was hacked and attacked. In total, BMWU paid out approximately 200 ETH in compensation to all the holders involved. As an added safety measure, it also promptly moved all its metadata to IPFS.

Following these unfortunate events, Bored Mummy Waking Up rapidly recovered from the damages suffered while striving for greater customer satisfaction. On top of the hefty compensation, it launched the Gratitude Drop and Halloween Drop which were created for the purpose of giving back to the community and as a token of appreciation for their continuous love, support and loyalty.

On September 12th, BMWU officially entered the Metaverse after successfully purchasing 5 plots of estates in The Walking Dead auction by The Sandbox. On top of that, it is currently working on creating 3D mummy avatars in The Sandbox as well as a social hub to mark its first steps in Metaverse exploration. Shortly after that on October 10th, it purchased 6 additional pieces of land in Cryptovoxel which will be transformed into small virtual towns to enable the BMWU community to showcase their artworks or products to the world.

Despite being the new kid in the NFT space, Bored Mummy Waking Up has discovered endless possibilities by prioritising its community while continuously paying heed to their needs and concerns. This helps to mould and improve its range of revolutionary offerings while keeping up with the latest NFT trends. It hopes to continue thriving on this sustainable model to be in the digital artwork realm for the long run.

In the near future, Bored Mummy Waking Up aims to further foster a healthy, growing community of NFT enthusiasts from every corner of the world. Many exciting events are being created to be launched in the upcoming months, such as public sales for the highly anticipated BMWU Pyramid Drop, a community-forward Maker Drop, as well as the reveal of its 3D Avatar in The Sandbox.

According to Louivee, the founder of Bored Mummy Waking Up: “We have many exciting plans in the pipeline for the Bored Mummy NFT, such as the Pyramid Drop and the Maker Drop which will be launched in December this year. Furthermore, everyone should also keep an eye out for our one-of-a-kind 3D avatars which can be used in virtual games in The Sandbox.”

“On behalf of Bored Mummy Waking Up, I’d like to thank everyone for their unceasing support and trust. We sincerely believe in the importance of giving back to the community and society. This has propelled us to engineer our future development innovatively by keeping the BMWU community at the core of everything we do. For instance, we are in the process of building a virtual mummy town for our community in Cryptovoxels, as well as a social hub exclusively for our members who own our avatars in The Sandbox,” he added.

About Bored Mummy Waking Up

Bored Mummy Waking Up is a limited edition NFT collection of unique digital collectibles thriving on the Ethereum blockchain. It consists of 8,888 mummies with 444 exclusively drawn as famous historical figures such as Tutankhamun, Cleopatra, Qin Shi Huang, Empress Dowager Cixi, Charles V, Napoleon, Sitting Bull, Black Beard, and many more. Each mummy is created from a total of 184 traits with 14 attribute categories.