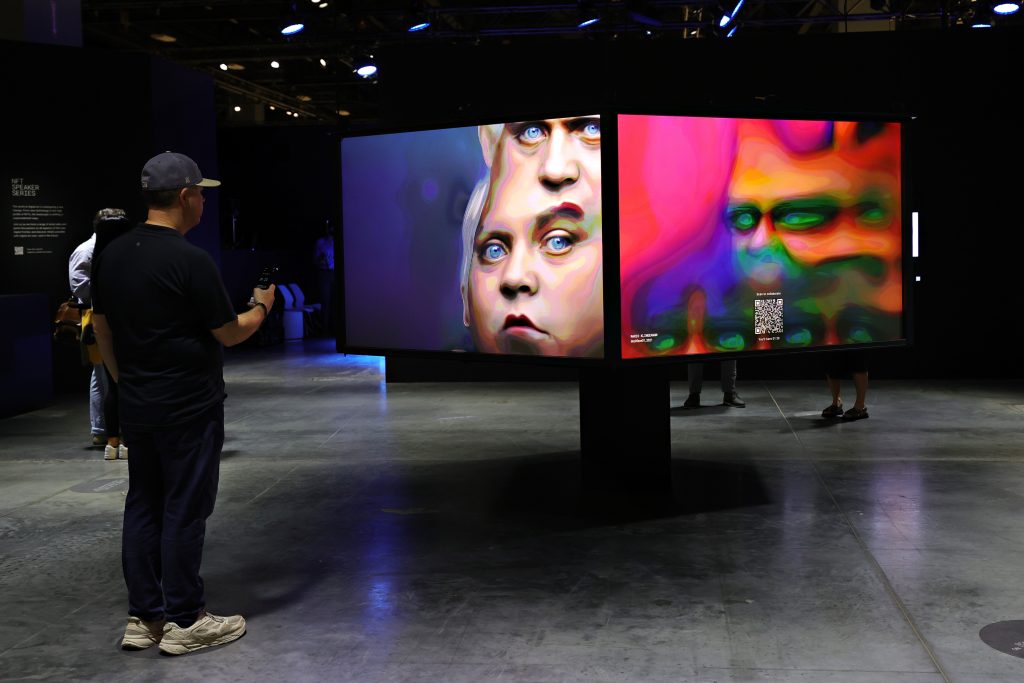 This last week, Art Basel Miami was aflutter with the gigantic sea change that’s fundamentally altered the art world: the solidification of the entrance of cryptocurrency, the blockchain and all things NFT. As artists swiftly set up their crypto wallets and collectors take crash courses in the difference between Bitcoin and ETH, major players in the investment space are emerging on the horizon of this thoroughly digital world. These are the figures who’ve already made themselves essential in the conversation about the Metaverse; the hypothesized version of the Internet is rapidly becoming a space that’s full of potentially, artistically and creatively.

Gord is a co-founder of the Metaverse Group, a virtual real estate company that works to facilitate the acquisition and distribution of virtual property. In the context of the art world, museums and galleries could one day soon be establishing exclusive institutions in the Metaverse that rest on virtual land. Metaverse Group is making sure to be a part of that.

Kiguel’s Tokens.com recently acquired 50 percent of Metaverse Group; the website has recently begun establishing a virtual tower in Decentraland. The plan is that the tower will generate income by hosting advertising for other brands. Metaverse towers like these also seem ripe for billboard installations from established artists. “Rather than try to create a universe like Facebook, I said, ‘Why don’t we go in and buy the parcels of land in these metaverses, and then we can become the landlords?’” Kiguel told the New York Times.

Singh began selling his own artwork in NFT format in February of 2021, and has subsequently spent $125,000 thus far buying NFTs art to display in the metaverse. He’s also made upwards of $1 million selling NFTs of his own artwork, and has begun to invest in artists such as Ankit Kapoor, Navneet Bawa, Anwesh Kumar Sahoo and Rachna Ravi.

SoftBank has just announced that it will be investing $150 million into the metaverse platform Zepeto; the platform is overseen by Naver Z, a unit of Korean billionaire Lee Hae-jin’s Naver. Son, SoftBank’s chief executive, is an established investor and Silicon Valley kingmaker whose financial backings have had a hand in Uber, WeWork, and Slack. If Son is confident in the Metaverse, this all but guarantees that leaders in other industries will follow.

The Defiance Digital Revolution ETF launched Thursday on the New York Stock Exchange Arca Platform. “The next generation of traders are not like traditional asset allocators. These people are interested in things that allow them to connect and create and be a part of something,” Sylvia Jablonski, the co-founder, told Yahoo Finance. “The NFT world has created this sense of representing ownership for digital assets that has fundamentally changed culture and the market for things other than stocks and currencies.” This has endless implications for the art space.

It was Sundaresan himself who played a crucial role in the explosion of NFTs onto the global scene: the collector, who goes by MetaKovan, paid the astonishing sum of $69.3 million for Beeple’s Everydays – The First 5000 Days at Christie’s, kicking off a global conversation about non-fungible tokens that has yet to abate. Sundaresan has also said that he wants everyone to download a copy of Everydays: The First 5000 Days for free.

Anand Venkateswaran (aka Twobadour), who also bought the Beeple NFT alongside Sundaresan, wrote in the aftermath of the sale that the purchase was all about showing “Indians and people of color that they too could be patrons, that crypto was an equalizing power between the West and the Rest, and that the global south was rising.” He also who runs the Metapurse fund with MetaKovan.

Frank Balas is the director of investment strategy at the GM Advisory Group, which has recently invested in a fund dedicated to the Metaverse. “As the physical world integrates with the digital world at an accelerated pace, we want to be invested in companies that are best positioned to capitalize from this digital transformation,” Balas told the Wall Street Journal.

Lovell founded BridgingTheGap Ventures, which is currently working on a project dedicated to launching an NFT initiative for global youth empowerment at Miami Art Week. BridgingTheGap’s mission is to raise $11 million in support of young artists and innovators. It’s meant to be the world’s largest Impact NFT drop. The project, Lovell told Observer, is designed “to alleviate the barrier of entry for young artists to participate in the digital marketplace. I’ve always been fascinated in the power of technology, so at the height of the pandemic we built a Metaverse galactic spaceship in virtual reality. We’re interested in helping young people to upscale and prepare for the digital economy.”

Venture capitalist Matthew Ball recently launched a metaverse-themed exchange-traded fund (ETF) called META ETF that has thus far grown to include more than $800 million in assets. Funds such as these could be goldmines for prospective creative grants, and since META ETF is touted as “the first exchange traded product globally to provide investors with exposure to the rapidly-growing market of the Metaverse,” there’s a getting-in-on-the-ground-floor element that’s present here too.

If denizens of the art world wish to strategize about how best to advance their businesses or enliven their personal art practices, familiarization with the Metaverse is going to quickly become a necessity.