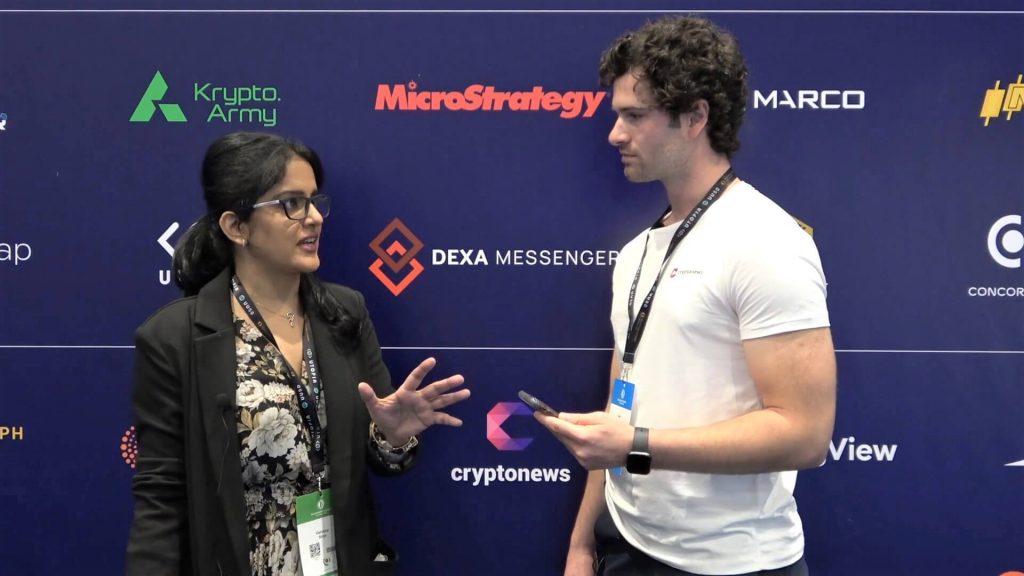 Vishakha Singh, VP of WazirX NFT Marketplace, and Matt Zahab, the host of the Cryptonews Podcast.

Although only a small portion of the Indian population has purchased non-fungible tokens (NFTs) so far, the market is ripe for growth as there is a lot of interest in creating and monetizing content there, Vishakha Singh, Co-founder and Vice President (VP) of WazirX NFT Marketplace, told Cryptonews.com at the Blockchain Economy Expo 2021 conference in Dubai last week.

Top India-based crypto exchange WazirX, which is owned by Binance and is planning to launch a non-custodial exchange, has launched its NFT Marketplace back in April this year. Since then, it has acquired a waitlist of 20,000 creators, according to Singh. However, out of these 20,000 creators, only 1,000 have been greenlisted so far. According to the VP, this is due to rather strict and elaborate Indian content-related guidelines.

“We’re a country full of many religions, many cultures, we have to be very very careful. So that was a reason why we did not want to be gatekeeper, but we had to do a bit of gatekeeping to ensure or actually build a culture around NFTs,” she said.

According to her, so far, only 0.000035% of the Indian internet population have purchased NFTs, which is a rather small number compared to 0.009% of internet users globally. However, this is set to change as the older generation that believes in traditional physical assets like gold, silver, or real estate more is being replaced by generation Z and generation Alpha, both of whom want to be “asset-light.”

Vishakha Singh, who comes from the film industry, also says that NFTs are going to get way more traction as more creators, as well as users, are going to discover the value and utility of the non-fungible tokens.

“It’s a new additional revenue stream for not just independent film producers like me but even for actors. You know all the content that we put out on social media – it’s just nightmare – you have ownership of it but it still doesn’t belong to you. Put in on the blockchain – monetize it,” she urged.

(Learn more: This Is How NFTs Might Change TV and Film Industries)

When asked about the key challenges revolving around NFTs, she stressed that interoperability is the primary challenge today and also said that more utility that comes with the tokens would help the faster adoption.
___

Watch the full interview and learn how the Indian NFT market is different and how it might change, what WazirX NFT marketplace has already achieved, how challenges in the NFT market might be solved, how NFTs can change the film industry, and more.

What is the state of the Indian NFT market right now?

So the Indian NFT market is growing by leaps and bounds. We have some interesting numbers, you know, globally, 0.009% of the internet population has bought NFTs so far but in India, we’re only at 0.000035%. But on the WazirX NFT marketplace in India, we have a waitlist of 20,000 creators so far, so a lot of interest in creating there.

How is the NFT market in India different from other countries?

So, you have to remember that, you know, globally, the world with all these NFT marketplaces that have come up because of this huge success that everyone sees enjoys, and they literally paved the way for us. But the global market is very very mature and its evolved. Per capita income in the west is way higher, the attitude towards money and saving and investment is very very different and bullish, whereas in India there are people who believe in saving, who believe in physical assets, who are actually enjoying, who actually take pride in saying “we own a property,” “we own gold.” But the new generation, which is gen z and gen alpha want to be asset-light. And, you know, that’s why it’s very very different right now, but I think, and the crypto market in India and crypto users in India have proven that, because they’re primary between the age of 18 and 28 and art collections between 34 to 44, they have proven that this scenario is changing now.

In the next 3 to 4 years, how do you see the NFT landscape changing in India?

I think NFTs are going to accelerate crypto adoption in India, that’s one. Two: a lot of content creators are going to find value in NFTs. I mean NFTs have actually changed the lives of creators, we get testimonials every day from them, but I think moving forward we’ll see a lot of collaboration between platforms, things like interoperability would be easier…things like even integrating a Metamask wallet, and the process of buying an NFT would become easier and we’re also seeing a lot of…hopefully the laggards will also join the bandwagon.

What results has the WazirX NFT marketplace has seen so far?

So you know, when we started off we had a waitlist of 20,000 creators. We’ve actually went through a couple of thousands of creators and then again back to 20,000, so that’s the interest we’re seeing. But we’ve had some good numbers, we’ve tried…because you have to remember NFTs are content, and in India content-related guidelines are very very specific – they’re very very particular about, you know, content not hurting religious sentiments – I mean, we’re a country full of many religions, many cultures, we have to be very very careful. So that was a reason why we did not want to be gatekeeper, we had to do a bit of gatekeeping to ensure or actually build a culture around NFTs. So far, we’ve only green listed, about 1,000 creators out of the list we’ve received based on quality and consistency. Out of these, 700 creators have dropped NFTs, we have 400 organic collectors who have accounted for – while the number may sound small yet, but it is an important number – 400 collectors resulting in USD 50,000 worth of sale in 150 days. From an Indian context, it is a very healthy and inspiring number.

Well, I think from an NFT perspective…So the question most, a lot of art collectors have been asking is, you know, so far they are enthusiasts and they’re art collectors and they want to do this but they’re like: “so sure, we want an NFT, but then we sell in a secondary market, and somebody else is going to buy it – at what point does the selling stop?” You know, and who will that person be? So the answer I usually tell them is that I think the final NFT buyer who probably..there will be a buyer, a typical art collector who’d probably would have a Mona Lisa at his place who would not want to sell. So that’s…I mean it’s very difficult to predict, you know, but from challenges point of view, I think interoperability is the most primary challenge that we want to solve. Because the moment we make NFTs free-flowing from one chain to another, I think that would really take things to another level.

How important is utility to NFTs?

Very very important. In fact, just I think today we had a conversation about digital assets, right, and I think NFTs, though I am a very traditional Indian collector, I want value for everything. Everything. Like I need to see the art that I’ve collected. So for me, I would be very happy if I could get an NFT of say the Canne Film Festival, okay – their iconic poster every year. But I also want access to the Canne Film Festival, and I think that would be great. So utility is just, would help, again, faster adoption towards NFTs.

What does the metaverse mean to you and why it has become so important?

So yeah metaverse is you simplify it is nothing but virtual reality – metaverse it’s just a cooler word for that. But I think what I’m really kicked about is I would love to see…I want to have just an immersive experience – I keep telling all my friends who are tech people – and I’m a non-tech person completely – but I keep telling people that I think this is for the first time that non-tech people, non-stem background people can actually have an immersive experience thanks to the blockchain, NFTs, and now the metaverse and it’s just very very exciting.

Where do you see bitcoin going in the next two, five, and ten years?

Oh my God, no predictions, I mean bitcoin is too big, I don’t want to make any predictions whatsoever, it’s…Bitcoin is the boss.

Before joining WazirX as Head of NFTs you were an actress and film producer. What kind of ties and trends do you see between the film industry and the NFT and crypto industry?

Well you know, so I used to be an actress, and I am a film producer, I continue creating content and producing films and typical Bollywood ones and different than that, so for me, because I was an indy film producer, that was one of the reasons I got attracted to NFTs. Because earlier, as an independent film producer, I would, you know, sell my films and theatrical rights and music rights and then auditing rights and satellite rights. Now, I have NFT rights. And NFT rights are so beautiful that they do not contradict with your rights in the physical space, in the offline space. They are only to be exploited on the blockchain and that’s phenomenal – it’s a new additional revenue stream for not just independent film producers like me but even for actors. You know all the content that we put out on social media – it’s just nightmare – you have ownership of it but it still doesn’t belong to you. Put in on the blockchain – monetize it.
___
Learn more:
– Watch: CryptoBirb on Trends in Crypto Trading, His Exit Strategy, Bear Market, and More
– Watch: Tone Vays on Bitcoin Narratives, Bear Market, DeFi, NFTs, and Ethereum