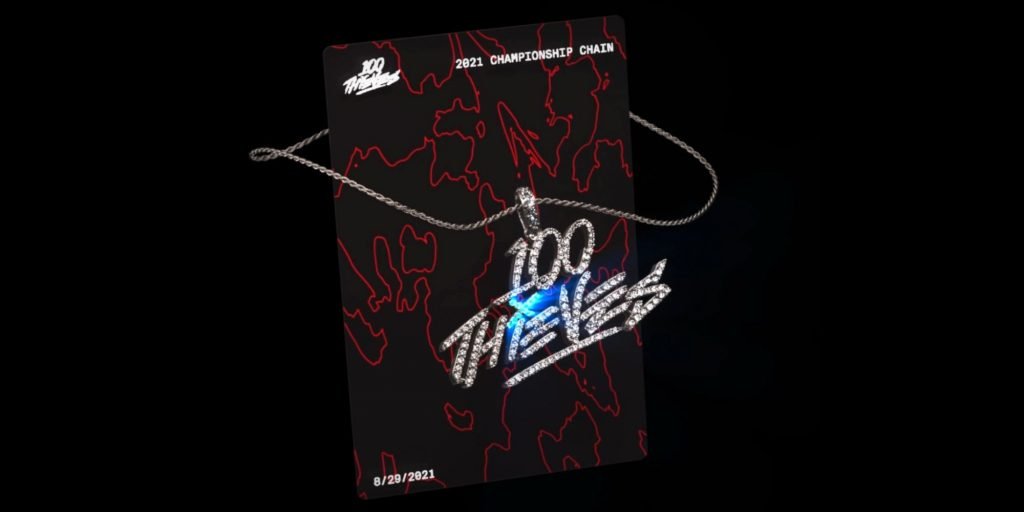 There may never be a way to separate the idea of a digital collectible from the Earth-destroying Ponzi scheme that is the NFT marketplace, but esports org 100 Thieves has made an attempt. Its recent NFT campaign goes to such lengths to distance itself from NFTs as we know them that it’s hard to understand why it needed to be an NFT in the first place. Buried beneath the obvious scams, exploitation of artists, artificial scarcity, cynical celebrity endorsements, massive carbon footprint, and gross speculatory investing, there’s still cultural value in digital collectibles waiting to be discovered. 100 Thieves NFT isn’t it, but it’s a step in the right direction.

The 100 Thieves 2021 Championship Chain NFT is a 360-degree animated model of the actual necklaces that 100 Thieves CEO Nadeshot gave to his League of Legends team after winning the 2021 LCS Championship. This is the esport equivalent of a commemorative ring that a hardcore Vikings fan might buy if they ever manage to win another Super Bowl. The difference is that it isn’t a cheapo version of a priceless piece of jewelry – it’s a digital representation of it given to fans in the form of an NFT.

100 Thieves didn’t get a ton of backlash over its NFT project last week the same way that Stalker, Troy Baker, or Worms developer Team17 did, largely because 100 Thieves didn’t call it an NFT. Despite being minted on the Polygon NFT platform and stored in a crypto wallet, 100 Thieves managed to obscure the fact that this virtual collectible is just like any other NFT.

In fact, the announcement does well to get out ahead of the common complaints about similar NFT projects. Three bullet points outline why you shouldn’t be upset about this: they’re 100 percent free and the org is covering all transaction fees on Polygon; they’re not intended for resale and 100T isn’t taking a royalty from future sales; and minting them has the same carbon impact as sending two emails. If all of those things are true, then it really is just meant to be a free digital keepsake for fans of 100 Thieves.

The problem with NFTs isn’t that they commodify something virtual, it’s, well, all of the problems I already mentioned. You can’t make a reasonable argument against a digital collectible as a value proposition unless you’re prepared to admonish physical collectibles too. Physical goods aren’t inherently ‘better’ than digital ones just because you can touch it with your hands or display it on a shelf. You can’t necessarily argue that NFTs like this have a bigger ecological impact than physical collectibles. Statues and trading cards cost energy to make, create waste as a byproduct, are made of plastic and other materials that end up in landfills, while the 100T necklace allegedly costs as much energy as sending two emails and creates no waste.

There’s still a few problems with the 100 Thieves project obviously. They may not be intended for resale, but that doesn’t mean they won’t be. Even though the org covered the transaction cost for the giveaway and isn’t taking a royalty, the NFT marketplace made its fee and will continue to make additional fees every time one of the 300,000 NFTs now in circulation gets traded. You can already find some for sale on OpenSea. Not only do these dubious platforms get a cut from every transaction, but exchanges on the blockchain cost ‘gas fees’, which depending on the amount of transactions happening at any given time, can cost a lot of computational energy. By existing on the blockchain as part of the NFT economy, the 100 Thieves NFT is contributing to the overall harm that NFT marketplaces cause. This doesn’t even begin to address the social and economic fallout that will inevitably come when the NFT bubble bursts. No matter how small the actual impact it actually has, the 100 Thieves NFT is undoubtedly part of the problem.

100 Thieves played the optics game well here, but it clearly isn’t taking a stand against NFTs or making an attempt to revolutionize digital collectibles. Nadeshot is heavily invested in the NFT racket and proud of it. He has a CryptoPunk NFT avatar on Twitter and Instagram and he’s tweeted about NFTs he’s purchased. When the necklace had been claimed 300K times, Nadeshot tweeted “wgmi”, an NFT community saying that means ‘we’re gonna make it.’ The Championship chain was a gift for fans of the organization as much as it was a campaign to boost the value of the NFT market.

Still, it represents an important milestone in the inevitable decline of NFTs. 100 Thieves couldn’t openly advertise its NFT without incurring the wrath of the internet and pressure to cancel the project. The org couldn’t invite people to invest in the project and pump it up like a normal NFT because that’s become a very bad look. Nadeshot and the 100 Thieves organization may see fan-focused giveaways like this as a way to Trojan horse NFT acceptance into gaming communities, but the reality is they had to design an NFT that goes against everything NFTs are meant to be in order to avoid public backlash. This is a good thing. It shows that digital collectibles can have a future beyond the highly predatory NFT market.

We just need a way to uncouple digital goods from buy/sell/trade marketplaces. When you buy a Pokemon plushie, it doesn’t automatically exist as an asset on eBay where you can track the value or similar plushies over time to determine the most profitable time to sell it. Digital collectibles need not exist in a new-age stock market in order to have value to the people that own them. NFTs are currently the only way to create, distribute, and maintain digital collectibles in a standardized way. We have to acknowledge that they’re fundamentally different from jpeg files on your hard drive, then seek a better solution than the blockchain. We don’t need exclusivity, scarcity, authenticity, or any of the things that have caused investors to buy $100,000 pictures of apes. If you’re a 100 Thieves fan, the digital Championship necklace is a cool thing to have. That’s all it needs to be.

Next: 5 Things I Would Want in Games More Than NFTs

Spider-Man: No Way Home Is The MCU At Its Absolute Worst

Peter Parker’s adventure into the metaverse could have been so much more.

Eric Switzer is the Livestream News Editor for TheGamer as well as the lead for VR and Tech. He has written about comics and film for Bloody Disgusting and VFXwire. He is a graduate of University of Missouri – Columbia and Vancouver Film School. Eric loves board games, fan conventions, new technology, and his sweet sweet kitties Bruce and Babs. Favorite games include Destiny 2, Kingdom Hearts, Super Metroid, and Prey…but mostly Prey. His favorite Pokémon is Umbreon.