Adidas sold more than $22 million in NFTs, but it hit a few snags along the way – The Verge 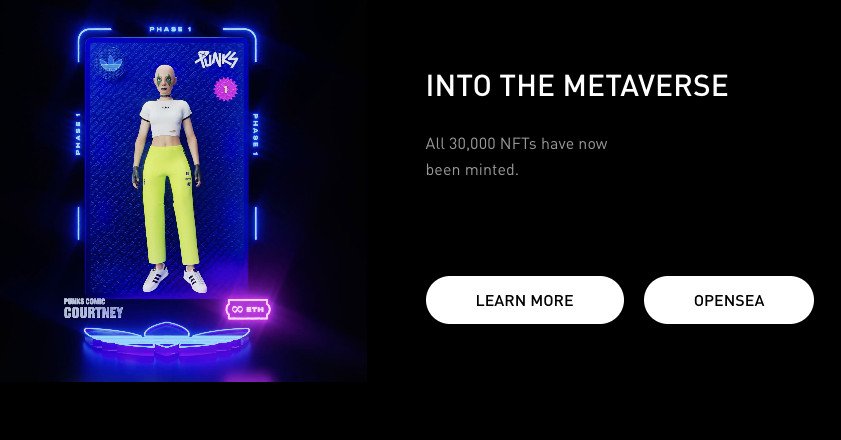 All 30,000 of Adidas’ Into the Metaverse NFTs were minted within a matter of hours of going on sale Friday. Each NFT cost 0.2 ETH, which currently equates to about $765, and the company sold 29,620 NFTs (“Adidas and partners” held onto 380 for “future events”), meaning the company earned more than $22 million from the sales in the span of an afternoon. (The price of Ethereum has been falling while writing this story, making an exact number difficult to pinpoint.)

Adidas made the NFTs in partnership with Bored Ape Yacht Club, Punks Comics, and GMoney (a pseudonymous crypto enthusiast). Buying an NFT gives owners access to special physical goods, like a hoodie and the tracksuit worn by the Bored Ape that Adidas owns, and upcoming digital experiences. However, the physical merch won’t be available until 2022, according to Adidas’ FAQ, so buyers essentially just put in expensive pre-orders for the clothes.

Early access minting began shortly before 1:30PM ET, but Adidas quickly hit an issue with Mutant Ape Yacht Club owners not being able to mint the NFTs that forced it to pause. Adidas has promised to reimburse everyone who lost gas fees (which are fees taken in order to mint the NFT) while there were problems.

Early access resumed at 5PM ET, and public minting kicked off at 6PM ET. It’s unclear exactly when the NFTs were fully sold out, but Adidas’ website showed that all the NFTs had been minted minutes after the public sale began. However, one person was apparently able to mint many of the NFTs, which may have disrupted how many were actually available.

It’s unclear if Adidas plans to offer more NFTs in the future, but it teases on its website that “this is just the beginning.” Given how quickly the first batch sold out — and how much money Adidas made in just a few hours — it seems unlikely this will be the only NFT offering from the apparel maker. And it will almost certainly want to compete against archrival Nike, which just bought a company that makes virtual shoes and NFTs.

Other companies may also be looking at the success of Adidas’ NFTs with dollar signs in their eyes, but before they rush to the nearest blockchain, they might want to consider the cautionary tale of the planned NFTs for S.T.A.K.E.R. 2. Developer GSC Game World announced the NFTs on Wednesday but received swift backlash from fans. The developers tried to lower the heat by tweeting out an explanation on Thursday, but it quickly deleted that before announcing it would be canceling its NFT plans altogether.