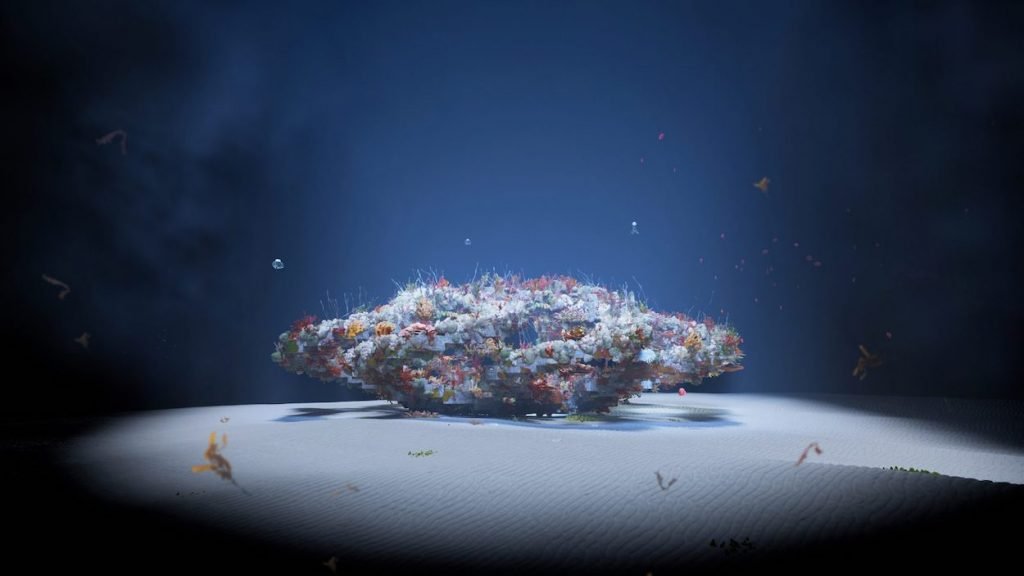 Our daily look at the world through the lens of design.

The Design Dispatch offers expertly written and essential news from the design world crafted by our dedicated team. Think of it as your cheat sheet for the day in design delivered to your inbox before you’ve had your coffee. Subscribe now.

Have a news story our readers need to see? Submit it here.

To promote OMA’s ReefLine Sculpture Park, Charlotte Taylor and Nicholas Préaud have released a trippy, underwater video NFT. The footage takes Shohei Shigematsu’s Coral Areanthat sculpture—which has a physical counterpart—out of a white-box gallery and submerges it under the Atlantic, where it’s quickly colonized by corals, sponges, and seaweed. “The structure is a sculptural masterpiece yet it has a very modest purpose; architecture not for the masses but for the aquatic ecosystem,” Taylor says. “We hope to convey this humble monument and its very meaningful impact though following its journey.”

The ReefLine Sculpture Park was initiated by the Argentine curator Ximena Caminos this past year; OMA signed on as the masterplan designers shortly after. Once complete, the park will stretch seven miles and will only be viewable to snorkelers and divers. “The ReefLine is a unique project that brings attention to and mitigates the dangers of climate change in Miami Beach, while simultaneously enriching the city’s vivid art scene,” Shigematsu says.

The Retreat House, known colloquially as Casa Las Olas, is the perfect place to beat wintertime S.A.D, and it’s ready to take reservations. The 20,000-square-foot, seven-bedroom house is one of five structures that dot the verdant site in Playa Grande, Dominican Republic, all of which were built by New York City–based firm Young Projects.

Originally conceived as a private estate of the Novogratz family, the now-public vacation rental sits on a 4.5-acre plot of land overlooking the Atlantic Ocean and a verdant tropical jungle. Young Projects oriented the house in such a way to maximize natural light and ventilation in all of the bedrooms and offer sweeping, panoramic views of the area’s natural splendor. The standout element? Its roof, which comprises more than 200 distinct scissor trusses, resulting in “a highly complex and fluid structural condition that shifts along corridors, curves through primary double-height spaces, and rotates to navigate the geometry at each corner,” according to Young Projects.

Zaha Hadid Architects takes to the metaverse with an immersive gallery program.

NFTs abound at Art Basel, but Zaha Hadid Architects’ virtual art gallery, NFTism, may be one of the best we’ve seen. Set in a futuristic base that features the British design firm’s signature curvilinear designs, NFTism runs the gamut of cutting-edge and up-and-coming technologies: MMOs, high-speed networks, clouds, and parametric design tech are all included.

The Rubell Museum is making progress on its second outpost in Washington, D.C.

Occupying the site of the historic Randall Junior High School, the Miami-based Rubell Museum is slated to renovate the defunct building into new exhibition spaces that will allow visitors to observe artists at work—a move that suggests an expansion in the Rubell’s artist resident program. A further hint: The museum’s 31,000-square-foot campus will sport a 12-story, U-shaped residential structure with 500 apartments, 50 of which will be affordable.

A record-breaking donation gets the Met’s Modern Wing closer to a total overhaul.

A staggering $125 million grant, courtesy of activist collectors Oscar Tang and Agnes Hsu-Tang, has brought the Met’s decade-long expansion of its Modern wing closer to fruition. Though the architects behind the expansion have yet to be selected, the $500 million overhaul will expand the wing’s exhibition footprint by 80,000 square feet.

Following on the success of his early forays into the art world, the Grammy-winning musician and artist is back with another immersive experience, called Kube, that invites viewers into a mirrored, trapezoidal form housing Anish Kapoor’s Mirror (Pagan Gold to Organic Green). “As soon as you walk into that cube, you become part of it,” Moretti tells AD. “All of a sudden, the relationship between you and the Anish Kapoor [artwork] that’s in there is something that is not only visible, but it’s beautiful. It raises its own questions.”

The Surfside condominium collapse could be attributed to nearby construction.

The construction of a nearby 18-story condo tower may be to blame for the Surfside building collapse this summer. Victims and their families filed a class-action complaint, saying the developer of Eighty Seven Park ignored unsafe vibration warnings and other safety issues. Per the complaint, 80 percent of vibration readings exceeded the threshold of safety.

The Hiroshi Sugimoto plan will go forward for the Hirshhorn Sculpture Garden.

It’s been a long road, but the plan first proposed by Japanese artist Hiroshi Sugimoto in 2018 to revamp the Hirshhorn Sculpture Garden has finally been approved. The new plan, which will update the original Gordon Bunshaft design, will make space for open-air galleries, a new water feature, and improved wheelchair access. More than half of the $60 million needed to fund the project is accounted for, and the museum anticipates reopening the garden in 2024.

A mosaic from Caligula’s party boat was being used as a coffee table.

Ralph Lauren immortalizes its Polo bear in a new series of skate decks.