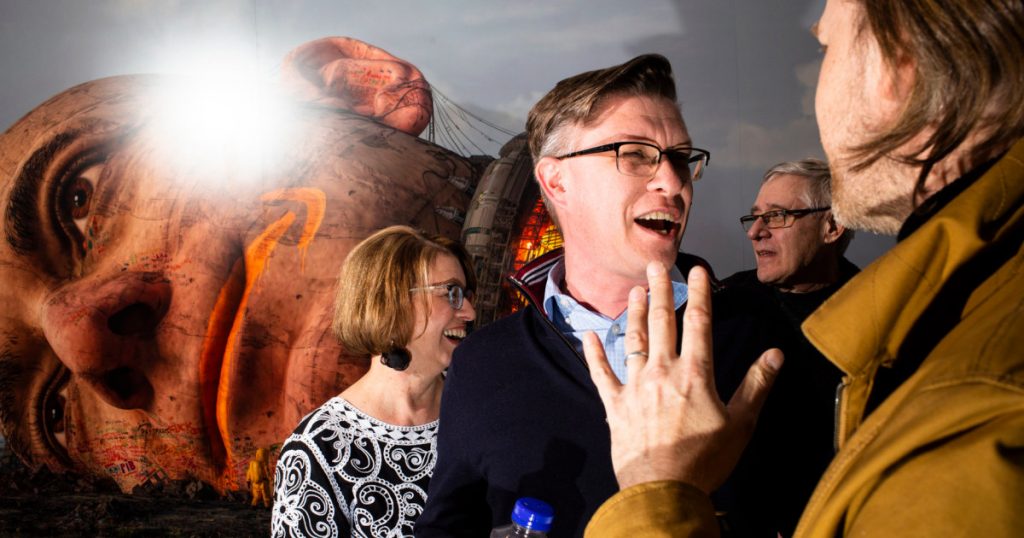 Mike Winkelmann’s life changed on March 11, 2021, and so did the trajectories of the art and the blockchain communities.

That day, Winkelmann, a digital artist more commonly known by the handle Beeple, sold “Everydays: The First 5000 Days,” an NFT-linked digital collage at Christie’s. The work brought in $69.3 million at the revered British auction house.

Now, a year later, he spoke with NBC News about the sale and what he thinks about the evolving NFT art scene.

“It very much changed the trajectory of my life,” he said. “The same could be said for the broader art world.”

The sale brought NFTs — non-fungible tokens — into the limelight, inspiring a surge of enthusiasm and money around the technology, and the NFT community is still navigating its move into the mainstream. Estimates of total NFT sales in 2021 vary from $25 billion to $41 billion — both a tremendous increase from 2020, when sales totaled more than $250 million.

Winkelmann, speaking during a Zoom call from his 50,000-square-foot studio in Charleston, South Carolina, now employs 15 people and is building his own gallery space.

The story of NFTs isn’t all money and glory. As they’ve become increasingly entrenched in pop culture, digital platforms that facilitate the sale of NFTs are facing allegations of environmental destruction, insider trading, service errors, plagiarism and fraud, leading to calls for increased regulation and oversight of a space that was founded on the rosy promises of individualistic freedom and artist empowerment.

Still, many in the art world believe NFTs represent a permanent shift, albeit one that has to contend with challenges not entirely uncommon to the high-art community.

Marcus Fox, the global managing director of post-war and contemporary art at Christie’s, said the initial Beeple sale did fuel speculation but that he’s seen a shift in the market.

“I don’t think there’s the same perception of a bubble now that there was a year ago,” he said. “More familiarity and more awareness is being created around what is great and has real staying power.”

“I think that those are the really the building blocks of a sustainable market.”

An NFT is a unique digital certificate that attributes authenticity. They are bought and sold within a blockchain — a digital ledger formed by a network of computers — oftentimes using cryptocurrency like ether (ethereum).

While commonly associated with digital art, NFTs have been applied to a wide range of objects including memes, photos and NBA trading cards. While most NFTs are exchanged on OpenSea, Nifty Gateway and LooksRare are also prominent marketplaces.

Winklemann said he’s well aware of the issues around NFTs and that he doesn’t find the specificities of cryptocurrency or blockchain to be that interesting. For him, the NFT technology simply allowed him to earn money from his art.

The people entering the NFT market after Winklemann’s sale see that potential, as well.

“I did this for 20 years without making any money,” he said. “The money aspect is nice and allows me to work on more ambitious projects.”

With his first gallery exhibition, “Beeple: Uncertain Future,” currently on display at the Jack Hanley Gallery in New York City, he said he believes that NFTs are a gateway to placing digital artwork in conversation with contemporary art. He compared the trajectory of digital art to the history of photography, noting how it wasn’t initially considered fine art.