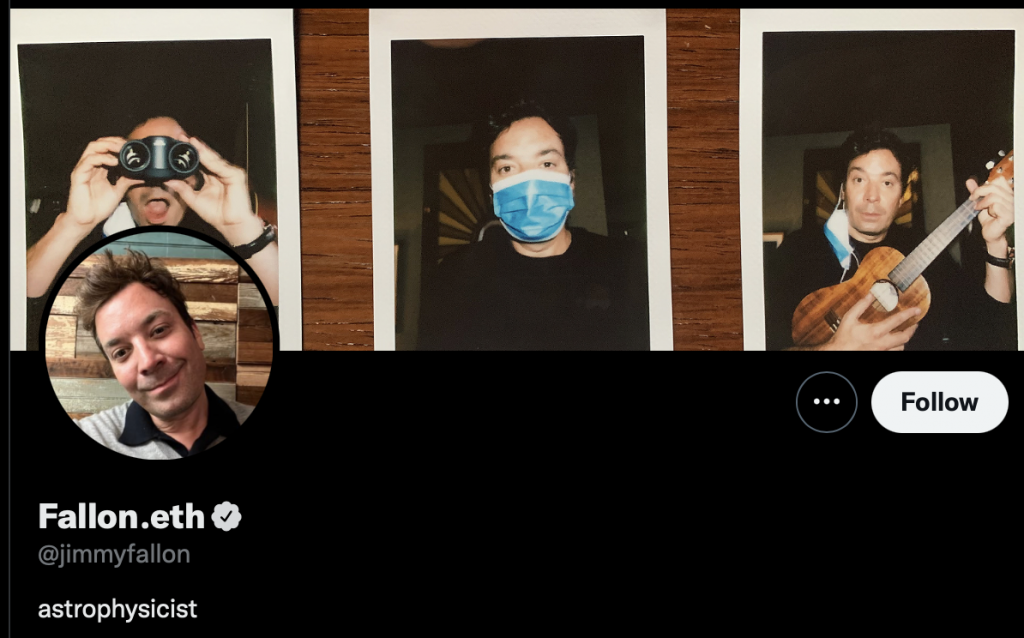 The relationship between the NFT community and A-list celebrities has been a befuddling one for most. This January, the uninitiated scratched their heads over Paris Hilton’s appearance on Jimmy Fallon plugging the Bored Ape Yacht Club. “We’re part of the same community, we’re both Apes,” she said to Fallon in her quintessentially disaffected voice.

But times have changed, and we are now in what is being referred to as a crypto winter. As the art world tries to reconcile what its relationship to the crypto-space is, so are celebrities, and both Hilton and Fallon have changed their Twitter profile photos from the Bored Apes that once united them. Although, to be fair, both maintain the “.eth” suffix that keeps them a part of the conversation, and Hilton is still minting her own NFTs.

It was only in January was when Twitter first rolled out the feature that allowed NFT owners to make their digital artwork of choice their profile picture, with its own in-house verification system. Many followed suit. However, several months later, many celebrities have abandoned their non-fungible avatars, including Serena Williams, Reese Witherspoon, Shonda Rhimes, Lil Durk, Travis Barker, and Meek Mill.

Fallon’s change came unceremoniously, with nary a Tweet addressing his sailor-capped Ape being swapped with an old-school, analog selfie of the comedian. There’s an added sense of irony in the timing too, since the NFT NYC convention is currently going on near Times Square, just around the corner from his stage at 30 Rockefeller Plaza.

There’s reason to believe that the NFT community is aware of this seismic distancing. According to a viral Tweet from NBC News reporter Kevin Collier, the convention may have hired a Snoop Dogg look-a-like, “Doop Snogg”, to attend the festivities and inflate the convention’s prestige.

“I’m at the NFT NYC conference again in Times Square, and Snoop walked by, flanked by security. I grabbed his handler, said I’m a reporter, would love a few minutes,” Collier wrote. “The guy said actually that’s an impersonator, legally can’t say it’s him, they hired him to drum up excitement.”

The question remains if is this further proof that the crypto-sphere is becoming more siloed from other facets of culture, or if it is just another symptom of the greater vibe shift?