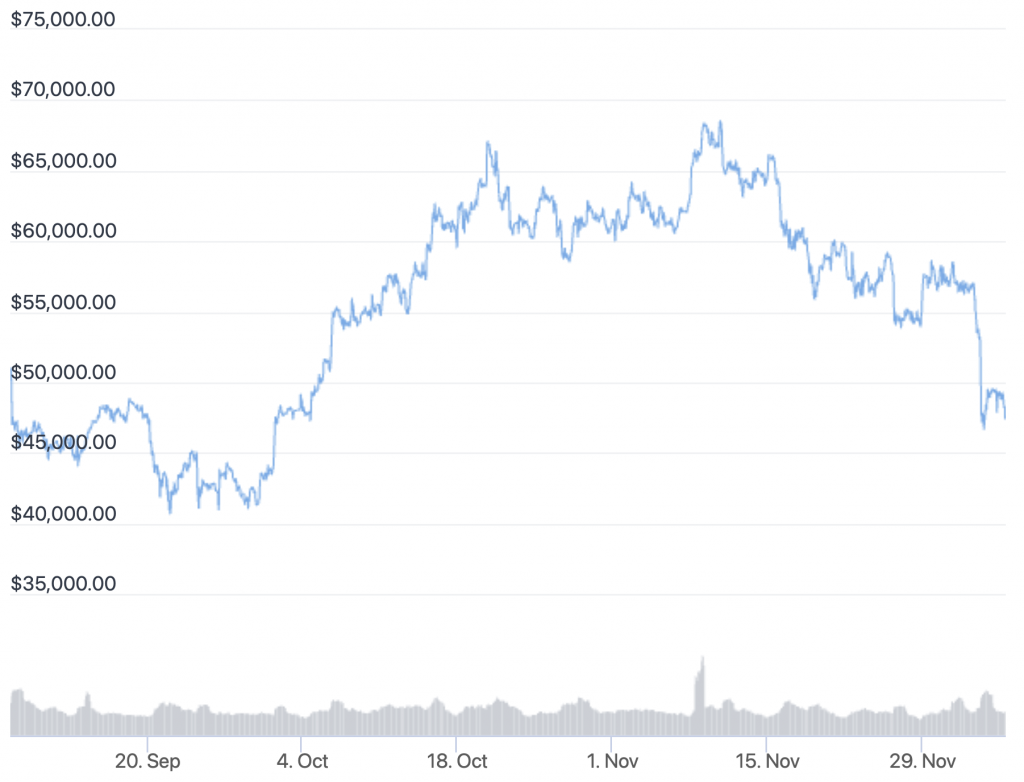 The crypto market continued lower on Monday after a weekend sell-off that was described as a “significant deleveraging event.” Despite the event now being behind us, however, some traders continued to worry about the potential for an extended market correction.

The relatively larger decline for bitcoin has also led to a decrease in the bitcoin dominance, or bitcoin’s share of the overall crypto market capitalization.

At the time of writing, the bitcoin dominance stood at 39.1% per CoinGecko data, down from close to 70% at the beginning of the year.

The all-time low (also per CoinGecko) for this measure is around 32.8% as seen in January of 2018 just as a multi-year bull market for crypto was coming to an end.

“The rest of the crypto market recovers at a much faster pace than bitcoin” from events in the economy, Bloomberg quoted Sean Farrell, head of digital-asset research at Fundstrat, as saying in a note to clients on Sunday. According to him, this “speaks to the overwhelming level of institutionalization of bitcoin.”

Further, Farrell specifically pointed to news about the Omicron variant of the coronavirus, reactions to the potential for tapering from the Fed sooner than expected, and moves in the derivatives markets, as factors that have spooked traders in recent days.

“This risk aversion is down to several factors, including worries regarding the Omicron variant, Evergrande moving closer to default, and, most importantly in my opinion, institutions wanting to secure profits going into the year end to manage risk,” Marcus Sotiriou, Sales Trader at the UK-based digital asset broker GlobalBlock, said in an emailed comment.

Among the traders that over the weekend warned about the potential for a short to medium-term bear market was Scott Melker, better known as The Wolf All Streets.

Writing on Twitter on Sunday, Melker said that he is “skeptical” about the potential for a quick recovery, and that he believes USD 69,000 was “likely the top for a while.”

However, he added that his longer-term faith in bitcoin remains unchanged: “Long term I have ZERO worry. Next few months, not sure,” the popular trader wrote.

Open interest in the bitcoin market continued lower over the weekend, after falling sharply Saturday as prices across the crypto market crashed.

From a post-crash level of USD 16.92bn at 17:00 UTC on Saturday, open interest in bitcoin futures across exchanges stood at USD 16.45bn at press time on Monday, Coinglass data showed.

Commenting on the sell-off seen over the weekend, the on-chain analytics firm Glassnode called it “a significant deleveraging event,” with almost a quarter of open interest in bitcoin futures wiped out in one day.

However, Glassnode also hinted that the correction may not be as deep as some fear, saying inflows to exchanges have remained at relatively low levels. According to a tweet from the firm, crypto inflows to exchanges now are “meaningful,” yet “small in comparison to May.”

“This deleveraging was exacerbated by the fact that it occurred on a Friday night in the US coinciding with the weekend in Asia, which is one of the lowest periods for liquidity. This meant that even though leverage was actually lower than it has been in previous crashes, the effect was still substantial,” Sotiriou added.

According to him, this shows that even though markets have become more efficient over time, it still has a long way to go to avoid these situations of forced selling.

Correlations between stocks and bitcoin

Meanwhile, the weekend drawdown for the crypto market also followed a stock market correction before the weekend, which continued in Asia Monday morning. According to analysts, the market’s nervousness can be attributed to the emergence of the new Omicron variant of the coronavirus.

“The market has been volatile and will be so as long as investors seek details on the Omicron variant,” Ikuo Mitsui, a fund manager at Aizawa Securities, told Reuters in a comment today.

A correlation of 1 means the two assets are completely correlated, while -1 would indicate they move in opposite directions.

Commenting on the weekend’s moves, Ruud Feltkamp, CEO at automated trading bot Cryptohopper, also pointed to the connection between stock and crypto markets to explain the sell-off.

“The crypto markets have become very volatile. The Omicron variant and pressure on the TradFi [traditional financial] markets also seem to affect bitcoin. In contrast, in the bull market of 2017, you also saw several crashes of sometimes up to 38% of its value,” Feltkamp said.

He added that there is “a lot of emotion” involved in trading, and that this makes it more difficult to make the right move.

“Often, the more afraid you are to step in, the better. And when you’re feeling too confident, it’s often a good moment to step out,” Feltkamp said in an emailed comment to Cryptonews.com.