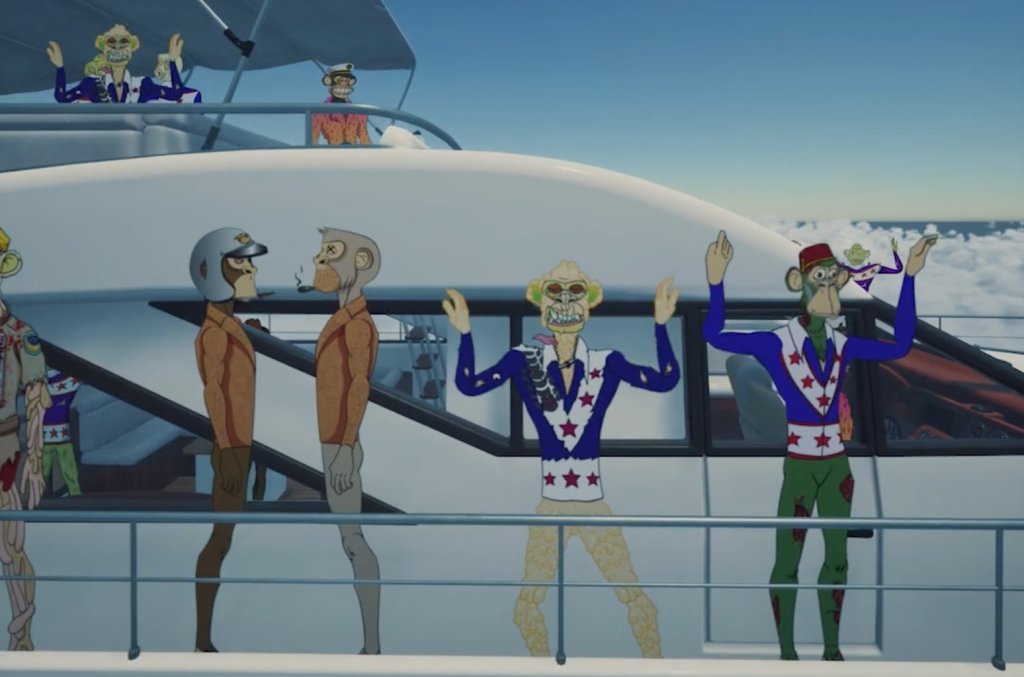 The Apes are sailing into the music scene. Bored Ape #9797 from the influential Bored Ape Yacht Club NFT project dropped a music video on Friday (Dec. 10), becoming the first NFT to do so, and Billboard has the first look at the visual.

The video is for a song titled “Delist Your Ape (2DaMoon),” which features hip-hop artist Reo Cragun, who wrote the tune, and Clear Eyes (aka Jeremy Lloyd from electronic duo Marian Hill). In the animated visual created by Syft and Beverly Films, a bunch of Apes are aboard a yacht similar to the one teased by BAYC for its first annual ApeFest held Oct. 31-Nov. 6 in New York City. As the camera zooms in, #9797 — sometimes called “Jimbo” — begins to sing.

“This is not a gimmick/ Wallet full of digits/ I was putting work in when they did then they were slipping/ Twitter full of GMs,” Jimbo rhymes as the yacht rises out of the water to soar above land and water. “Spinning little savings on a project worth a lot of bands/ Now I can take a flight anywhere …/ I could cop a Bored Ape/Join a yacht club/ they don’t understand.”

The video ends with the yacht cruising in front of the moon, before the Bored Ape Yacht Club logo appears over the lunar body.

“When I met with the boys and we started plotting to work on a song together, they played me ‘To the Moon’ and I fell in love instantly,” #9797’s anonymous owner tells Billboard. “I knew this is what we have to release to represent the Bored Ape Yacht Club and my vision ’cause we are all going to the moon.”

Adds Clear Eyes: “Crazily enough, we made this song before s–tcoins and NFTs were going to the moon, in a real-life studio session together in L.A. in 2019. It was maybe the third or fourth song we made together, and it sparked a creative relationship that’s going strong to this day.”

Cragun added that he’s incredibly excited to release the song with Jimbo, and teased the future. “This is the first piece of many more songs to come, and next year, we have a lot in store with LNRZ DAO, and my album Diary of a Loner,” he shares. “We plan to onboard a lot of amazing talent into web3 and really take everyone ‘to the moon’ with us.”

This music video from Bored Ape #9797 is just the latest step NFTs are taking into the music business, with BAYC poised to lead the way. In November, Universal Music Group’s 10:22PM label announced that it had signed a virtual band named KINGSHIP, which consists of four Bored Apes owned by collector Jimmy McNeils. The same month, Post Malone spent a whopping 160 ETH (about $682,000) on Bored Apes #9039 and #961, with the latter appearing in the music video for his collab with The Weeknd, “Right Now.” Timbaland also aped in in November, creating a metaverse-based entertainment company called Ape-In Productions that will use BAYC NFTs to perform music and sell products.

Guy Oseary, who manages Madonna and U2, is also now representing Yuga Labs, the company behind the Bored Ape Yacht Club. The project, which originally launched in April as a collection of 10,000 NFTs, has since seen its popularity skyrocket. It currently boasts a floor price of 52.69 ETH (approximately $231,200) on popular NFT marketplace OpenSea, and according to Rolling Stone, the BAYC ecosystem has already generated about $1 billion.