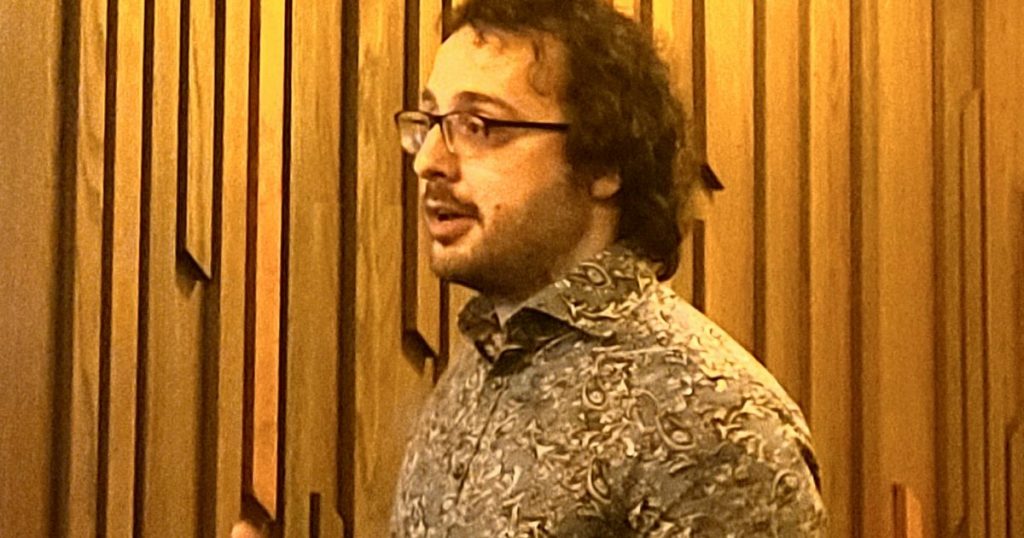 The emerging Nonfungible Token (NFT) industry has seen explosive growth recently, with Forbes reporting that worldwide sales of the unique identifier stored on a digital ledger and representing proof of ownership reached $10.7 billion by the third quarter of 2021.

For comparison, NFT sales only reached $2.5 billion through the first half of the year.

Interest and questions surrounding the burgeoning industry have risen alongside revenues, and on Thursday representatives from Codeboxx sought to demystify this new method of publishing and selling art. Held at Grand Central Brewery, the event presented an open forum where attendees could discuss and ask questions about NFTs, both with the presenter and each other.

Codeboxx, which relocated its headquarters from San Francisco to St. Petersburg earlier this year, specializes in training people in web, app and software development in just 16 weeks. About two weeks of the intensive program are dedicated to blockchain operations, although that could soon increase or become a standalone program.

“It’s not on our roadmap yet, but it is an option we know that people are looking for,” said Tim Kennedy, campus director for Codeboxx. “It’s definitely in the works – we just haven’t figured out exactly where we’re going to go with it yet.”

Mathieu Houde, chief program officer for Codeboxx, led the presentation and told the crowd that coding knowledge is not required to create NFTs. He explained that platforms to create and sell NFTs are constantly emerging, and OpenSea remains the most popular. Houde said a person needs to create an online wallet, upload an image or video, follow the user interface design and click the “create” button.

“Then you can put it on the marketplace and sell it,” said Houde. “It’s as simple as that.”

Houde said easy-to-use templates allow people to create up to thousands of NFTs in seconds, as the computer creates the art for the user. While there are many tutorials available to learn how to create NFT’s and code on the blockchain, Houde said a section of the Codeboxx development boot camp is devoted to that endeavor and provides a deeper understanding.

Houde said that NFTs are backed by smart contracts, which enable them to exist as more than just digital art.

“You can do whatever you want,” began Houde. “Whatever logic, whatever business rules you want, you can put that in the smart contract.”

Houde created 10 special NFTs to award attendees after the presentation. He explained the 10 random winners would initially receive the same image. However, he said the images would later reveal St. Pete landmarks because he built that feature into its smart contract.

Houde said every NFT has a unique ID built into its smart contract, which prevents duplication of the NFT. He said the computer knows it should not allow a duplicate of the same token and will prevent any transactions that attempt to replicate an NFT.

While an NFT can represent traditionally created artwork, Houde said it is often not backed by anything tangible. Instead, most are computer-generated.

“The computer does all the work,” said Houde. “That is something funny in the space. It takes seconds to create 10,000 NFTs – and people go crazy for them.”

If an artist did want to recreate their works into NFTs, Houde said they could either take detailed photos of the art and upload them into a program, or draw them using digital software.

While NFTs typically represent digital art, Houde said more and more uses will emerge as the concept evolves. He pointed out that NFTs are gaining in popularity in the gaming industry, and users will have the ability to own unique items not available to other gamers. Houde said NFTs could even help homebuyers.

“For example, if you wanted to buy a house, you could use your NFT as collateral,” said Houde. “We’re starting to see that more and more.”

The fashion industry is creating virtually clothing using NFTs, which Houde said will continue to expand as more people populate the metaverse. Houde believes it is only a matter of time before people can virtually smell and touch things in the metaverse, which will cause it to grow exponentially.

When asked if Codeboxx will begin to offer a course on creating in the metaverse, Houde succinctly replied, “we’ll have to.”

“We are always working on facilitation and more courses,” he said.

For more information on Codeboxx, visit its website here.