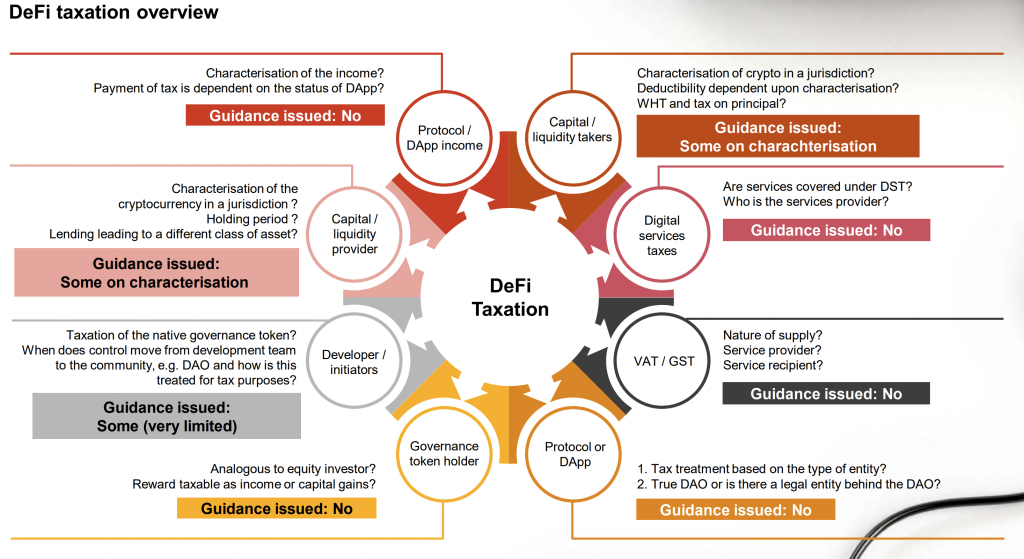 People who are part of Decentralized Autonomous Organizations (DAOs), or even holders of certain decentralized finance (DeFi)-focused governance tokens, could have tax liabilities that far exceed what they expect to see, a new PwC report on crypto taxation has warned.

The report, which looked into taxation of income arising from fields such as DeFi, Proof-of-Stake (PoS) protocols, and non-fungible tokens (NFTs), said tax authorities are having an increasingly difficult time keeping up with the space, which is moving “at a pace unseen in many other industries.”

On the issue of DeFi taxation, the major consulting company suggested several models that tax authorities could adopt, including taxing holders of a protocol’s governance token, taxing the initiators or the developers behind a protocol, or even taxing liquidity providers directly.

“A first step is to consider the level or the degree of centralisation or decentralisation, and in which legal form the protocol is organised,” the report said.

It added that in cases where a protocol can be considered relatively centralized, for example because it “is carrying out the actions of a legal person (such as a company),” the tax situation is pretty clear:

“[…] it will be that legal person that is responsible for paying any tax that may be due,” the report said, before adding that “complexity increases when a protocol or [decentralized application – dApp] is not working for a legal person, company or individual.”

But although there may not be a “legal person” behind a protocol, the report warned that DAOs, which are sometimes set up to govern DeFi protocols, could be considered “a partnership” under for example English contract law.

“In a worst-case scenario, individuals who have become de-facto partners simply by purchasing a governance token could find themselves unwittingly liable, although this would seem to be extreme,” PwC’s researchers wrote.

Meanwhile, the report also noted that the emergence of more protocols that use the PoS consensus algorithm – and in particular the transition by Ethereum (ETH) to PoS – creates another challenge for tax authorities.

Judging from a survey conducted by the firm, no jurisdictions have so far defined staking income on its own for tax purposes. Instead, most countries categorize it as a form of “other income,” while some countries consider it income from “services.”

But although staking income has generally not been categorized by tax authorities, most survey respondents still believed it to be likely that staking income is taxable in their jurisdiction.

To simplify tax rules around staking income, PwC’s report suggested that the “taxable event” should be the sale of the coins received as income, rather than the receipt of the coins.

“However, this approach does not seem to have gained traction with many of the jurisdictions we surveyed, although – as highlighted earlier – there is very little formal guidance, and so this space should be watched closely,” the authors wrote.

In terms of NFTs, the report noted that the two income streams that typically stem from the sale of an NFT – the sale to the first buyer and royalties from subsequent sales – create complexities in terms of how the digital art pieces should be taxed.

It added that it is also “challenging” to determine whether the sale of NFTs should be subject to consumption taxes such as the value added tax (VAT) in Europe or sales taxes in the US.

“Just as tax authorities around the world started to look at and issue guidelines on the indirect tax implications of cryptocurrency transactions in recent years, they may need to add NFTs to their list,” the report said.

Lastly, PwC’s experts noted that it will be difficult for governments to effectively collect taxes on NFTs, given differing rules around the world and the often unknown real-world identities of buyers and sellers.

“Coupled with the potential difficulty in identifying the location of the buyer, it would also be challenging for both the taxpayers and tax authorities to properly administer these transactions and remit / collect such revenues,” the report said.