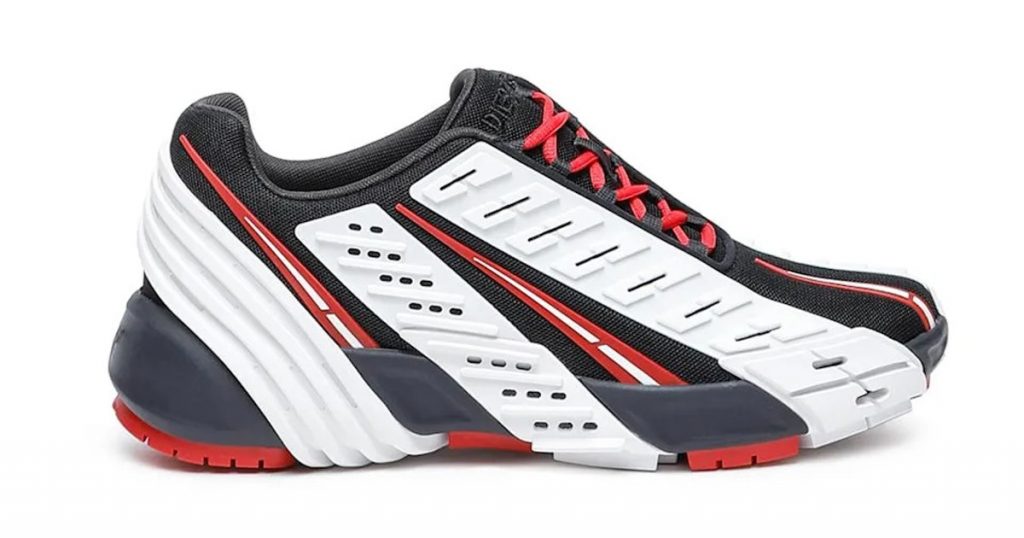 Diesel is launching its comeback. The brand is officially unveiling a hero sneaker that aims to set the tone for its footwear’s future. The shoe, along with other digital contributions, is Diesel’s way of pushing its own athletic and cultural limits.

Adding Diesel to the fire — The sneaker, aptly named the “Prototype,” was first debuted at the Spring / Summer 2022 runway show. Its construction boasts a multicolor upper, but not without hefty detailing. White rubber overlays, strategically placed at an angle with plenty of symmetric texture, sit on a grey, navy, and black body. The lacing system, bound in a criss-cross, lies interestingly off-center. Overall, the shoe, nicknamed “Model” to mirror the footwear campaign’s “beginning of a new thing,” is noisy yet performance-ready.

The Prototype commemorates Diesel’s initiatives to completely redesign its current brand. CEO Massimo Piombini likes to call it “intense repositioning” as the whole idea is to bring back some of Diesel’s 2000s notoriety. Creative Director Glenn Martens, who has design credit and joined the team in 2020, also currently manages Parisian label Y/Project while codesigning one season of a Jean-Paul Gaultier collection.

Martens took no time to shake Diesel’s fundamental tree, not just do the expected job of making pretty things. Diesel’s prices have seen a 10 to 15 percent increase, despite absorbing the shock of the pandemic, which is meant to match the brand’s image upgrade. Martens’ global fashion experience and passion for sustainability, along with Diesel’s accelerating vision and shifting directive board, will probably mean a new overarching style for the brand.

With the digital dressings to match — Diesel is fully committing to its reinvigorated relevance, partnering with luxury NFT marketplace neuno.io to present the Prototype’s 3D design as an NFT. The piece was gifted to those who attended the annual NFT.NYC conference in New York earlier this month, with a wider release coming soon.

To bring the NFT to life, Diesel partnered with digital fashion house The Fabricant to oversee the digital artwork. The Fabricant, fighting for its place at the front of the virtual line, is attempting to translate physical luxury pieces into the digitally exclusive space. The result is an exclusive, limited-edition computerized sneaker that will be supported by metaverse enthusiasts and those close to the brand.

The official Diesel “Prototype” will see a December release via its website. More colors if the shoes are rumored to be unveiled as early as February, and by the looks of it, this is just the first step in Diesel’s return to the scene.