From Longhorns to the USMNT: 5 sports NFTs kicking off in Austin’s growing crypto-verse – Austonia 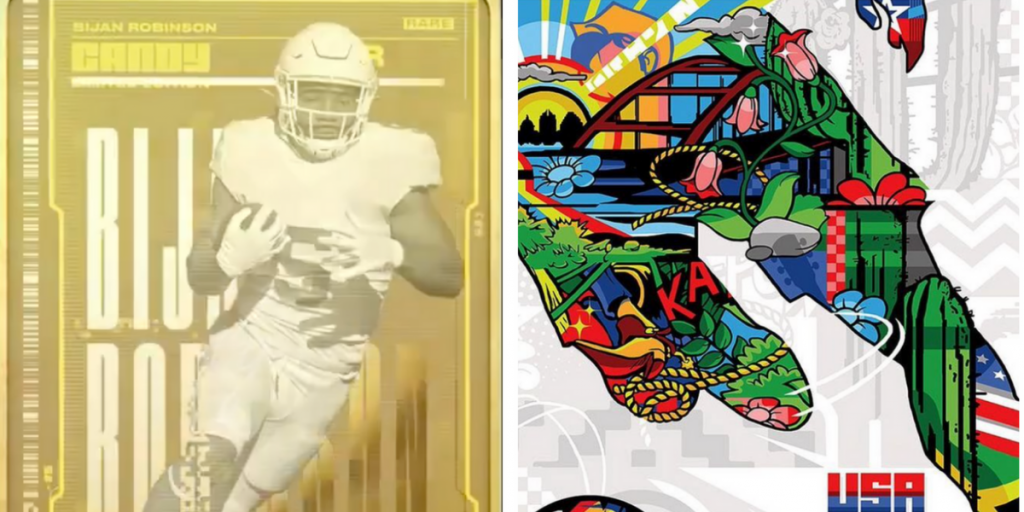 When Texas and the NCAA passed a bill allowing college athletes to profit off their names and likenesses this summer, Longhorn athletes joined professional teams and athletes by stepping into the growing NFT scene.

NFTs, which are essentially unhackable codes used as one-of-a-kind “certificates of authenticity” paid for with cryptocurrency Ethereum, have been cropping up in the Austin art scene and worldwide—and they’re quickly evolving into a sports fans’ paradise as a new way to snag some bragging rights through digital trading cards, tickets and highlight reels.

First up to the plate – a man who capped a scorching spring with postseason heroics in Omaha – from El Paso, TX…

NFT trading cards for the Hispanic Titanic will be available this fall as part of our first pack drop. pic.twitter.com/2xI3aMd6Tv

College sports’ entrance to NFTs originally came from another Austin—a picture of Stephen F. Austin’s women’s basketball team as they made their first NCAA championship berth was the first to break into the market in March 2020.

Now with NCAA NIL rules in their favor, it’s easier than ever for Texas athletes to cash in on their clout. The University of Texas’ LEVERAGE Lineup looks to serve as a database to connect even walk-on Longhorn athletes—like Surly Horn’s “Burnt Ends” tight ends deal—to lucrative sponsorship contracts.

But there hasn’t yet been a database that gives each player their own Robinson-esque NFT trading card—until NiftyHorns stepped in with an NFT business model that they hope to one day have officially linked to the school.

They’ve already made headway with an NFT for Longhorns baseball player Ivan Melendez using the same blockchain utilized by TopShot.

“(We want to) not make it exclusive to star players or just the big three sports,” NiftyHorns co-founder Josh Pitel said. “We feel very fortunate to be in a space where the fan base is large enough and passionate enough to actually support a wide variety of athletes.”

With nearly 130,000 followers across Twitter and Instagram, Bijan Robinson is a star on and off the football field. He’s used that clout to his advantage and partnered with Raising Cane’s, Athletic Brewing and Centre Apparel.

And he’s now following in the footsteps of NBA’s TopShot with his very own NFT. Trading cards are a growing commodity in the NFT community, with TopShot raking in $700 million on cards, highlight reels and more last year.

Robinson’s 100 Rare NFTs currently sit at $250 and feature a hero shot, his jersey number, position and an animated signature with a sleek, high-tech gold finish.

COTA NFTs—360 views and tickets too

Each of the two NFTs feature 360 views of different aspects of the COTA track. (Circuit of the Americas)

Back in October, Circuit of the Americas chairman Bobby Epstein appeared to embody his promise to make the 2021 U.S. Grand Prix the “biggest event on the planet this year” as an estimated 400,000 attendees made it through the gates for the Formula One weekend event.

To commemorate the event, the circuit decided to leap into the trendy NFT scene with two 360-degree panoramas, set at minimum bids of $30,000 each. And like many who look to tack on physical elements to the mystical crypto world, the circuit includes two VIP passes for MotoGP or Formula 1 events this year or next.

“Circuit of The Americas hosts some of the world’s most iconic sports and entertainment events,” Epstein said in a press release. “Just as visitors realize how unique and special COTA is, we know collectors will appreciate the significance behind our designs as well as the premium hospitality associated with the winning bids.”

As the school’s two Heisman Trophy winners, UT football legends Earl Campbell and Ricky Williams made sports history at their times as running backs for the Longhorns football team—and they encouraged others to become part of sports history themselves with a rare collection of 100 NFTs in honor of the renaming of the school’s historic football stadium.

In collaboration with UT, Campbell and Williams created the collection a year after the Darrell K Royal-Texas Memorial Stadium was renamed in their honor. The “Campbell-Williams Field NFT Collection” included:

The NFTs went up for sale in an auction beginning Sept. 8. Some NFTs, which include artwork from Queens artist Christian Paniagua and local artist Bryson Williams, are still up for sale.

“Life is short and only what we leave behind survives,” Ricky Williams said in a press release. “My name on the University of Texas Football field, and the opportunity to support the University’s Division of Diversity and Community Engagement, gives real meaning to everything I was able to accomplish during my time on The Forty Acres.”

As the U.S. Men’s National Team headed to Austin’s brand-new Q2 Stadium to play Jamaica in October, so did its Only Forward Art Series. This edition of the months-long series featured a poster design from Austin artist Phoebe “Feebee” Joynt.

Joynt incorporated her specialties in graphic design, street art and logo work to create the gameday poster, which was featured around town, at Austin FC’s downtown store and online as an NFT.

“I was thrilled to work with FootyCon and U.S. Soccer,” FeeBee told the USMNT. “I’ve always had a passion for soccer after being introduced to the sport by my dad as a young child and I’m so excited to create a piece inspired by the game that also references and is in dialogue with the amazing city of Austin that I call home.”

The rare free NFT became available to all fans attending the Oct. 7 World Cup Qualifier as well as via purchase on the NTWRK app the day before the game.