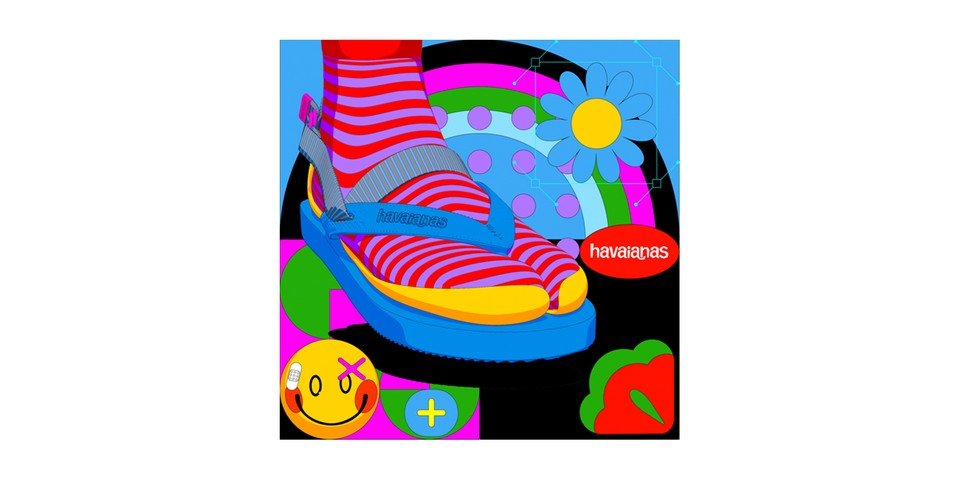 Havaianas has officially strolled into the non-fungible token marketplace, dropping its first-ever collection this month. The brand has partnered with Los Angeles-based, Brazilian artist Adhemas Batista on a series of digital NFT art pieces.

Since 2005, Batista has developed an extensive portfolio with Havaianas. This time around, the digital collection highlights the narrative between both the brand and the artist. In a statement from Havaianas, the summer-synonymous brand stated, “For more than twenty years we have collaborated with artists and graphic designers, whether as a canvas (through prints on the product) or in our advertising works, which are recognized and celebrated worldwide. But we wanted to tell a story, a good one at that, and that’s why we thought about Adhemas.”

Havaianas and Batista are set to release five new digital art pieces, depicting the collection’s theme of “Felicidade”, Portuguese for “happiness.” Batista revisits his history with Havaianas, citing some of his best moments with the brand. Batista said, “My intention is to bring a smile to one’s face in the middle of this chaotic world. It is not about trying to fight chaos, but looking on the bright side and trying to embrace opportunities.”

Since the project is based in the same region where he was born and raised, the artist has chosen Favela Galeria to receive seven percent of the net profits collected by Havaianas in this NFT auction. Part of Batista’s payment from the sales will also be going to the same institution – an open-air art museum located on the east side of Sao Paulo.

The auction is taking place starting on May 12 through Foundation and will be live for 24 hours.

In case you missed it, Sotheby’s has announced that it will be accepting cryptocurrency in its upcoming Love Is In The Air Banksy auction.