In NFTs and Blockchain Technology We Trust? by Benjamin Ho – zocalopublicsquare.org 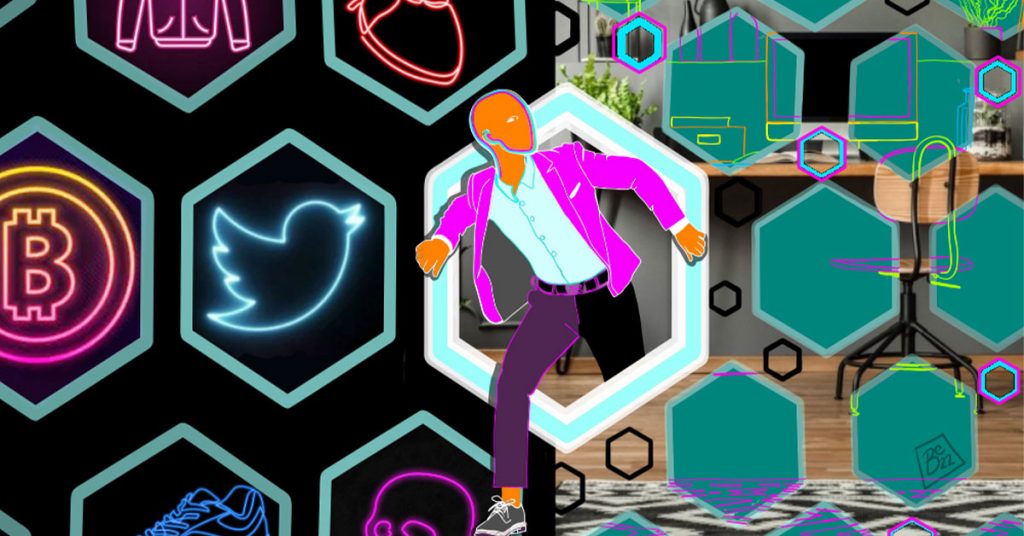 Are we in a crisis of trust? Trust in institutions—governments, medicine, media—has been declining for decades, and a lack of trust in public health programs has fueled COVID-related deaths. It seems like every day we see news stories about deceitful executives or evasive government officials, giving us new reasons to distrust corporations and the institutions we have always relied upon.

Can we, then, find hope in the form of technologies that allow us to trust each other in new ways, through new institutions?

Twitter recently added a feature that lets users identify themselves with an NFT picture, distinguished by a new hexagonal border, rather than just a regular profile photo. An NFT (short for non-fungible token) is a digital commodity, typically an image, whose ownership is recorded on a ledger stored on a blockchain. This definition is probably meaningless to the average consumer; indeed, many businesspeople dismiss NFTs as frivolous and a fad.

But the technology underlying NFTs reminds us of something crucial about the way we function in society. Twitter’s move isn’t just a gimmick—it’s also about trust: the trust people place in new technology, but also the trust we put in one another. NFTs are creating new ways for us to trust, based on self-expression.

My research is on the history of trust, from its hunter-gatherer origins to its fundamental role in the economy today. It is a story about how humans learned to work together across great distances. Vast cooperation entails risk—it is much easier to trust your neighbor than it is to trust a supplier across an ocean—but institutions that facilitate trust have allowed us to form societies that create and innovate at a global scale. Today, trust pervades every part of the modern economy. You can see this in the money we use that is backed by the full “faith” and “credit” of the government (the word credit comes from the Latin word for trust). New institutions, like the ones that allow strangers to get into our cars (Uber) or to sleep in our homes (Airbnb), also build trust.

Blockchain technology and its main application, Bitcoin, were designed to move the locus of trust from centralized institutional authorities to decentralized networks, using a computer algorithm. A blockchain provides a way to store a ledger (think of a spreadsheet) not just on a single computer, but distributed across thousands, so that no untrustworthy bad actor can manipulate the ledger for their own ends. Bitcoin is simply a currency, where the record of the amount of money you have is stored on a ledger distributed across the internet, rather than in a pile of paper bills, or on a computer in a bank.

Many blockchain proponents believe the technology will allow us to manage the exchange of money or property rights without the burden of bureaucratic rules and outdated systems imposed by old institutions. Yet often it tries to solve “problems” that are already held in check by trusted systems. Few of us worry that the banks we use will lose our money, or that the Federal Reserve will debase the U.S. dollar. Also, taking people out of the system, and replacing them with an algorithm, creates its own new set of problems. For instance, while records stored on blockchains are protected from meddling by complicated computer algorithms, accessing your money in these systems often requires just a password or “digital key.” What happens when somebody misplaces their password? Billions have been lost on the blockchain in such instances. And billions have been stolen from blockchains by hackers exploiting mistakes in computer code.

However, blockchain technology can be useful for jumpstarting trust in new institutions in developing countries. Game theory and economic experiments (as well as everyday experience) suggest that trust is earned through repeated interaction, forged through customs and norms that can take generations to develop. The U.S. financial system has had hundreds of years to build up trust, but people in a developing country with relatively new and/or weak legal institutions may be less likely to trust a new bank. New decentralized financial services, powered by blockchain technologies, could be especially useful for building trust in such environments. El Salvador recently became the first country to adopt Bitcoin as legal tender, hoping to capitalize on these new innovations.

Many of our interactions with other people already happen online. As more of our social lives become digitized, perhaps in the coming metaverse, people will spend more and more money expressing themselves online—just as they do in the offline world today.

New digital geographies also lack histories and institutions of trust, and thus might benefit from blockchain technology. Which brings us back to NFTs.

An NFT allows someone to claim ownership of a particular instance of a digital good. Once created, NFTs can be bought and sold, with fees for every transaction going to the blockchain and associated service providers. Such services could easily have been provided by a government, which already keeps ledgers tracking ownership of digital property rights like patents and copyrights. But governments are slow to adopt new technologies. Similarly, a private entity could also have offered similar services, but creators are less likely to entrust the tracking of their art to a for-profit company or a new organization. Placing NFTs on a blockchain speeds up the process of getting creators and consumers to trust the new system, because the technology helps ensure transactions are transparent and protected from manipulation.

Why would we want to claim ownership of an instance of a digital image in the first place? Because, increasingly, we live in the digital world. Many of our interactions with other people already happen online. As more of our social lives become digitized, perhaps in the coming metaverse, people will spend more and more money expressing themselves online—just as they do in the offline world today.

They might buy digital clothes. One of the biggest sources of video game revenues is in-app purchases, including digital outfits for a player’s avatar to wear inside the game. Aloy, a video game character, was recently featured on the inaugural digital cover of Vanity Fair Italy. Companies like Nike have sold virtual shoes for players of the game Fortnite and are moving to sell you NFTs of shoes that would only exist in the metaverse.

Buying and wearing clothing is one way we express ourselves. For now, this means publicly displaying our clothed bodies in physical spaces. When someone buys designer clothing today, they don’t own the right to reproduce that clothing item, just the right to show off that particular (expensive) instance of the clothing, and to wear it. Up until now, there has been no easy way to buy a digital designer outfit the same way we’d buy a physical designer outfit. NFTs change that, and open up a world of online expression, by creating a system that protects creators by allowing consumers to distinguish between licensed and unlicensed copies of digital goods.

This kind of expression matters. In some of my research with Jonah Berger and Yogesh Joshi, we find that the brands we buy—in fact everything we buy—conveys to the world something about who we are: our social status, our personality, our trustworthiness. For example, psychological experiments find that people can form surprisingly accurate assessments of someone’s personality just by observing the objects in their bedroom.

Our fashion choices and other purchases—digital or otherwise—are a reflection of our identity. All through history, humans have (for better or worse) used shared identity—shared family, shared ethnicity, shared religion, and shared language, but also shared taste in music, movies, or sports teams—as a way to decide who to trust and, therefore, engage with in business, in romance, in friendship, and more.

The new Twitter NFT feature is designed to allow Twitter users to further customize their social media profiles in the same way our clothes are on display to the world, but with added confirmation of its value. Some lament the energy costs of NFTs and their contributions to climate change, yet those costs are small compared to the emissions associated with other expressive goods like fast fashion.

Others lament the development of NFTs as just another overhyped Silicon Valley tech trend, representing the excesses of late capitalism. I see it as something different—another way for humans to do what we have always done, to find new ways for authentic self-expression and to connect to the people we trust.