Inside the NFT Rush: Gary Vaynerchuk, the NFT Scene’s Booster-in-Chief, Is Predicting ‘Carnage’—But No One Seems to Care – artnet News 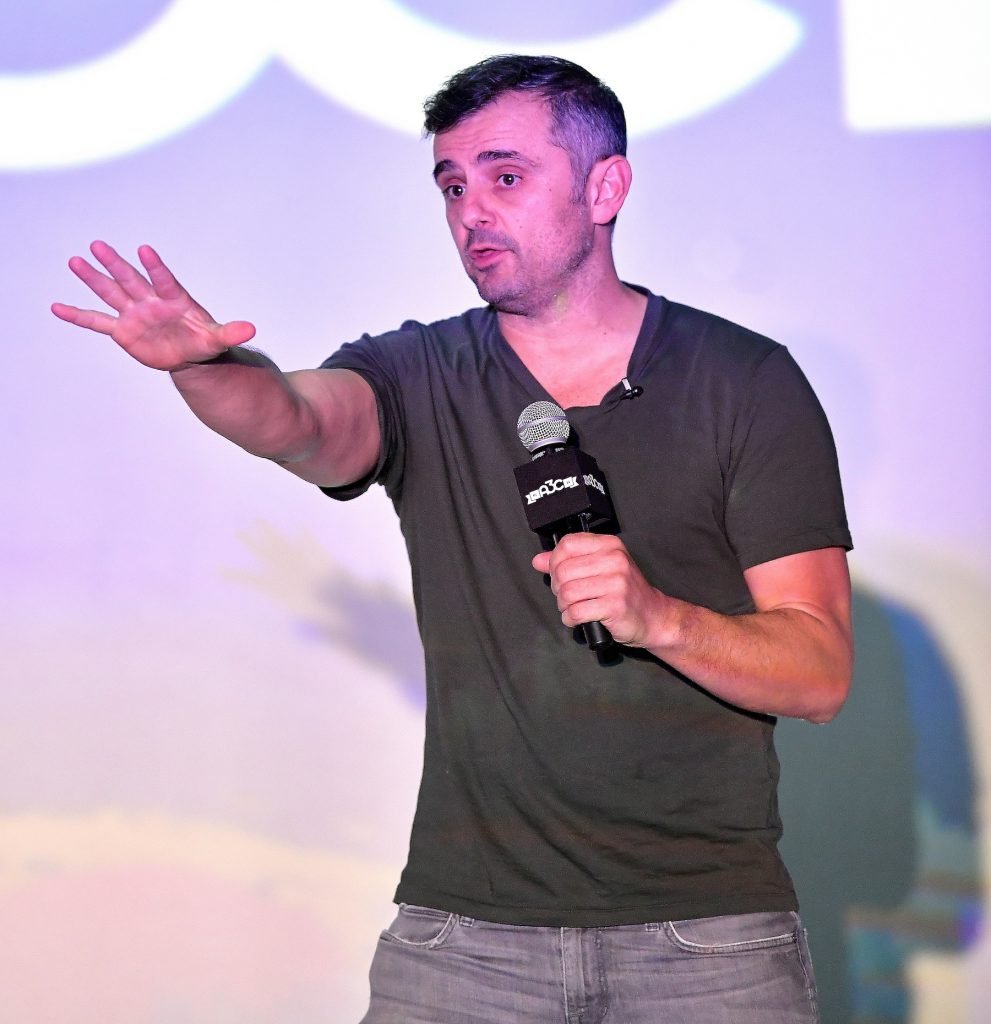 This article is the first of a series about NFT.NYC and the culture surrounding NFTs.

Truth be told, I am still making up my mind on NFTs, aka non-fungible tokens, the digital art phenomenon that has swept across my world like a wave of jolly orcs in the last eight months.

In the end, I realize, there may not be one final take on them, because there is not one issue at play, no single settled technology or protocol. That’s one of the things I took away from NFT.NYC, a three-day conference that came to town in the first week of November, along with its own associated circuit of Art Basel Miami Beach-style parties, with every configuration of A- to Z-list celebrity, brand, and creative media partaking.

On the one hand, I find it indisputable that the NFT/crypto-art space is heavily driven by FOMO, hype, get-rich-quick fantasies, strategic double-speak, and fake-it-til-you-make-it auto-hypnosis. On the other hand, much of the same applies to the worst of the “traditional” art world. Which of the two has the deeper deep end or the shallower shallow end is hard to say.

Personally, I like seeing long-suffering digital artists enjoy their moment. And, for all the silliness inherent in the idea of selling smart-contract-based ownership of jpgs, this idea is not, on reflection, so much sillier than some of the stranger forms in which conceptual art has come to be commercialized. NFT advocates can—and do—point this out by drawing on references from Marcel Duchamp’s Monte Carlo Bond to Sol LeWitt’s instructions-based art to Maurizio Cattelan’s duct-taped banana.

Above all, I left the three days of events during the conference convinced that the NFT-powered “Web 3” is coming. It’s not something you are going to escape hearing more about, because huge forces are propelling it: a “take-back-the-web” backlash against the current internet order, which in the 20 years since Napster, has destroyed the commercial basis for most creative careers; some genuine youth cultural foment from digital natives exuberant to see memes and gifs valued; the worldwide displacement of attention into online spaces that came with last year’s Covid quarantine; and, above all, financial capital’s desperate, win-at-any-cost hunt to invent new avenues of return in an economy that has been leeched of plausible investment opportunities by more than a decade of near-zero interest rates and global stagnation.

But we’ll get to all that.

I would be lying if I told you I didn’t find some of the naïveté and chicanery on display in NFT World very unsettling, but when I say I don’t have my mind made up, I mean it. In this series, I am just going to present some snapshots of NFT Week, what it felt like, what thoughts it inspired, and how I see this all playing out. So, join me as we… Jimmy McNelis and Gary Vaynerchek speak at the “Blast Off” event. Photo by Ben Davis.

On Monday, I go to “Blast Off,” a sold-out Tribeca event featuring Jimmy McNelis, founder of NFT community TokenSmart, in conversation with Gary Vaynerchek. I am glad I decided to go. It will prove to be one of the most illuminating events of the week.

Vaynerchek is this scene’s rare crossover star. In one of my own periodic fits of thinking “you need to do a better job of promoting yourself,” I have even read his social-media self-help book Jab Jab Left Hook Right Hook (though I have also failed to act on any of its advice). Vaynerchek’s NFT project, “VeeFriends” is a collection of 10,255 cocktail napkin doodles of animals that represent business virtues, such as “Empathetic Elephant” or “Patient Panda.” Tokens double as tickets to his upcoming VeeCon convention, so VeeFriends also function as a Vaynerchek fan club.

VeeFriends is one of the most successful, most closely watched, and most artistically vacuous of all current NFT projects. Watching Vaynerchek perform onstage, I can tell what makes him successful—and it’s more than just the fact that he is an engaging public speaker, something I will discover is a rarity in the NFT space. I’ve seen “Gary Vee” described as a “youth pastor of capitalism,” exuding both street smarts and a motivational speaker vibe. But he also performs tough love in a way that makes his audience feel like they are getting the straight shit.

Thus, on the one hand, Vaynerchek will brashly declare that there is “0.0 doubt in my mind that I am going to build one of the most valuable intellectual property brands in the world,” referring to the cornball bestiary of VeeFriends. He’s on record as saying that he has pledged the next decades of his life to making these half-baked doodles into the basis of the next Disney. When you buy a VeeFriend, that’s the promise you are buying: that someday, “Countable Ant” will be the Donald Duck of Gen Z.

But Vaynerchek also turns on a dime to scold his audience of would-be NFT entrepreneurs, decked out in their backwards ball caps and Bored Ape hoodies. “There is an enormous amount of carnage coming, and the amount of money that will be lost is staggering,” he bellows. “A lot of people have the majority of their net worth tied up in their tokens and that scares the piss out of me. We are smack in the middle of where the majority of the conversation is about money—and that is very dangerous.”

It’s sobering to hear this apex NFT pitchman offer such an urgent diagnosis of his audience. It takes me a second to remind myself that this is also just good salesmanship on Vaynerchek’s part: in a scene with so much obvious fraud, being the one who openly calls this out is also a way to position yourself as the smart move for investors. (Vaynerchek actually says that the first project he invested in, Chubbies, turned out to be a fraud.)

When this event’s Q&A comes, “Tyler from NFTs Anonymous” asks how people in the audience can evangelize the wider public on the beauty of the NFT future. Jimmy McNelis pipes in: “Give them a rising NFT. Give them an OpenSea account and notifications so they can see the offers. Give them their first hit of crack.”

“You’re a drug dealer,” Vaynerchek chortles. “Giving a little nickel bag always works.” Hearing Vaynerchek pivot within minutes from saying that people are going to lose their savings gambling on NFTs to exchanging jokes about how NFTs are like getting people hooked on crack is unnerving.

Alongside the electric Vaynerchek, the laconic McNelis is somewhat blown off the stage. But someone now stands up and asks him about something inspirational he apparently said in a Tweet in March. McNelis gamely begins to explain that for people of his generation, “the real world has let us down our entire life…”

My ears perk up. I imagine for a moment that McNelis will offer some reflections on how the real-world shocks of the last decade have shaped the social aspirations of the NFT movement.

I find this background incredibly important. We are already essentially compared NFT trading to gambling addiction; we know that depression is a trigger of addiction; and our culture—particularly youth culture—seems to me to be awash with a low-level depression, a sense of dislocation, decline, and loss that would seem to make it particularly vulnerable to some kind of mass outbreak…

But instead of discussing politics or economics, McNelis talks about entertainment.

His generation, McNelis states, was raised with video games, cartoons, superheroes, and so forth, “and we all grew up imagining, ‘What if these were real?’” He recalls the scene from Back to the Future II, where, stranded in the future, Marty McFly is terrorized by a 3D hologram of a shark advertising a sequel to Jaws that seems to burst forth from a movie marquee. McNelis expresses disappointment that nothing like that has yet been invented.

“NFTs gave us that shark,” he beams. “They have allowed us to conceive a reality where our imagination is true.”

I’m not exactly sure how tradable ape jpgs do that, but even crediting the thought: What a vision for Web 3! A world where holographic ads are, finally, possible!

And yet, despite Vaynerchek’s prophecy of “carnage,” and despite the non sequitur movie references, and despite the symbolic presence of—I kid you not—rapper, Fyre Festival promote, and now NFT booster Ja Rule, an air of unkillable up-up-and-away optimism pervades the whole event.

A woman who says she is a children’s book illustrator stands up to venerate Vaynerchek: “VeeFriends has changed my life, made me a better parent, a better supervisor.”

The event ends with a performance by spoken word artist and NFT advocate doc.PEACE. “This one’s for you, Gary Vee,” she says, before launching into an incantatory poem about her journey from being a girl wanting to be a self-published author, in a household where creativity was discouraged, to today:

a world where creators create

a space where creativity is celebrated and handsomely rewarded

I said: a new world which celebrates creativity, and handsomely rewards it

There is a swell of scattered applause and people yell out “Good Morning!”

my word cannot be duplicated

I broke free from pharmacy Gary Vaynerchek speaks to the crowd at the “Blast Off” event. Photo by Ben Davis.

Waiters carrying plates of hors d’oeuvres swarm the room. A gaggle of young men gather in a corner around Vaynerchek, and he continues to preach.