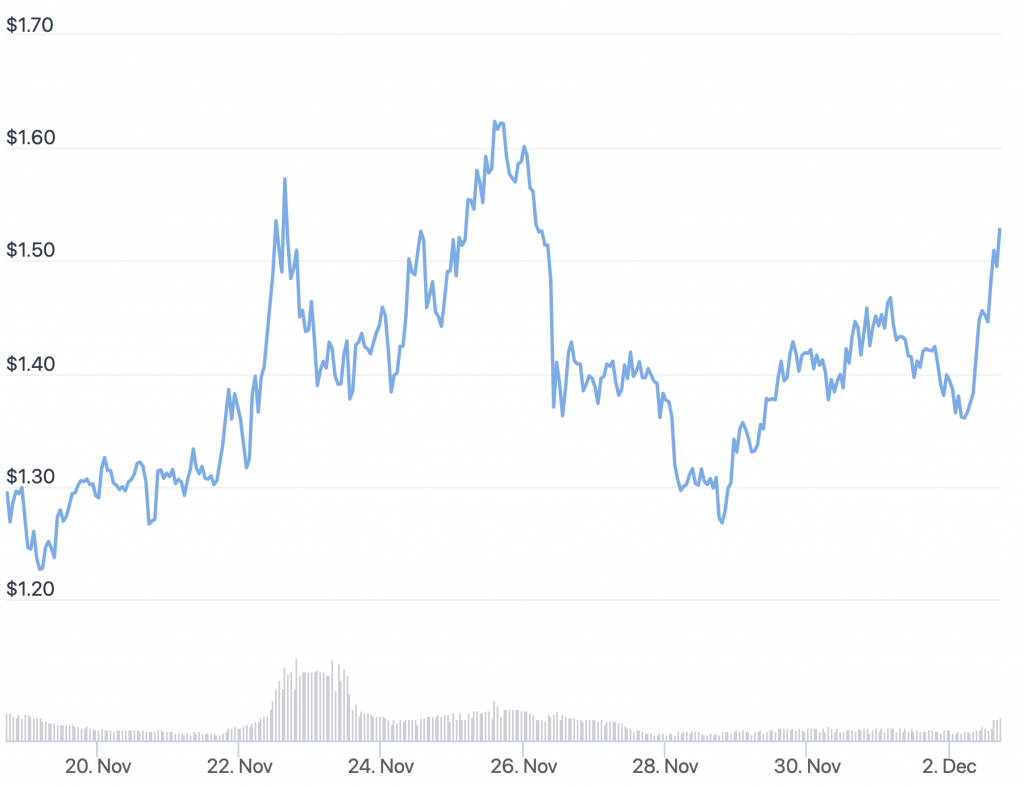 The IOTA network’s MIOTA token stood out as one of the strongest performers in the crypto market today, after the team behind it announced a new smart contract network known as Assembly based on IOTA’s smart contracts framework.

Assembly’s architecture “leverages the IOTA network as an immutable trust anchor and as a trustless bridge for feeless interoperability between smart contracts,” the announcement from IOTA said. It added that it expects this to “supercharge smart contract development in its various forms, including [decentralized finance] and [non-fungible tokens].”

The new network is set to be launched in 2022, and will come with its own native token known as ASMB. The token will initially be distributed to existing MIOTA holders via an airdrop that will begin “shortly,” the announcement further said.

It added that future token distributions “will be voted on by the community,” although it also said that it “will be reserved for developers, early adopters and [decentralized autonomous organizations – DAOs] of the network.”

In terms of the capabilities of the new smart contract network, the announcement said that it will come with “fixed fees as low as $0 thanks to the flexibility to individually define execution fees for smart contracts.”

“With these innovations, Assembly offers builders a powerful toolset to eliminate existing barriers to entry and bring the next billion users to crypto,” they added.

According to information from Assembly’s website, users can stake MIOTA to earn ASMB tokens. A wallet known as Firefly will be needed for users to claim their rewards, but no firm date has yet been given for when staking starts and when the ASMB rewards might be available.

The gains for the MIOTA token started well before the news of the new Assembly project became public.

The first tweet from Assembly’s brand-new Twitter profile that introduced the network was published at 14:09 UTC, which was also when IOTA shared the news on its Twitter profile. Meanwhile, the MIOTA token started trading higher at around 04:00 UTC, rising by more than 13% since then.

At press time, MIOTA was today’s best performing token among the top 100 cryptoassets by market capitalization, ahead of Uniswap’s UNI token and Cardano’s ADA, which rose by almost 5% over the same time period.
____
Learn more:
– ‘Almost Feeless’ IOTA NFT Marketplace Goes For Public Testing
– IOTA’s African Pilot Moves From Flowers to Tea, Fish, and Textile
– IOTA Works With Jaguar and Others on IOTA Access for Shared Devices