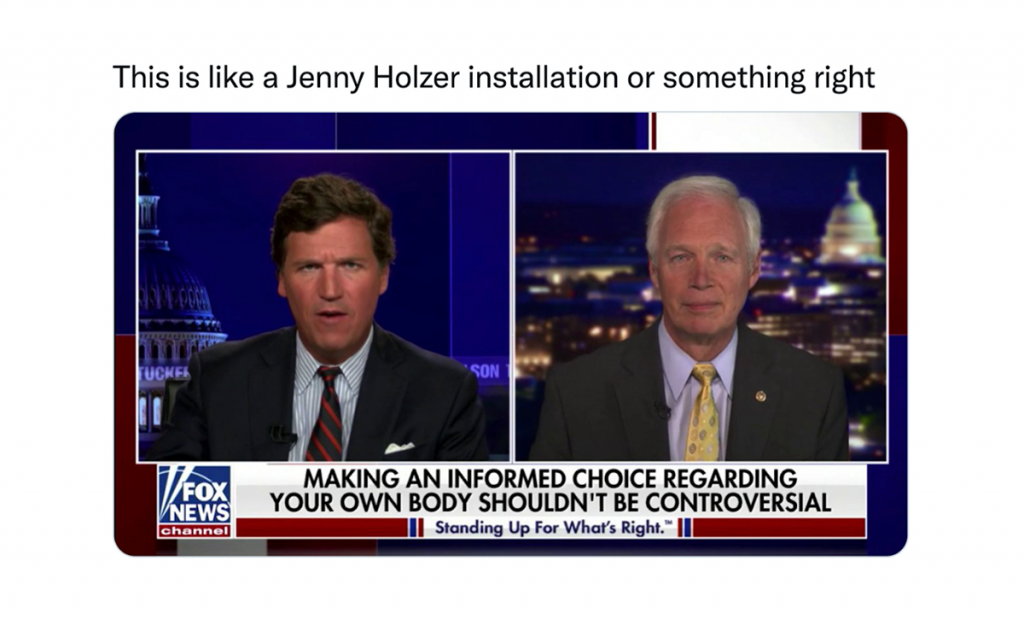 To the horror of those who believe in autonomous personal health decisions for uterus-bearing individuals, the Supreme Court officially overturned Roe v. Wade this morning, a move foreshadowed by a leaked opinion draft earlier last month. The decision will end federal abortion rights, leaving the legality of the procedure in the hands of state legislatures — some of which already have plans to ban abortions immediately. As the need for reproductive resources grows as a result of the ruling, artist Jenny Holzer has released an evocative NFT (non-fungible token) to raise funds for crucial organizations.

The digital artwork is a screen capture from Tucker Carlson Tonight that captures the vitriolic conservative pundit interviewing a guest, with the chyron spelling out the takeaway: “MAKING AN INFORMED CHOICE REGARDING YOUR OWN BODY SHOULDN’T BE CONTROVERSIAL.” They were talking about vaccine mandates, naturally, because Carlson and all his viewership lack a modicum of irony or empathy — they claim to believe in an individual’s ability to make an informed choice about what happens to their own body, just not in terms of being or remaining pregnant.

Twitter user and ACLU staffer Gillian Branstetter observed a similarity in the phrasing and ironic juxtaposition between the chyron text and the art of Jenny Holzer, whose series of Truisms involve a list of plain-text maxims. Originally presented as a typeset document when Holzer began creating these works in 1977, they nowadays appear as freestanding declarative statements, sometimes rendered in neon, on billboards, or in an array of merchandising formats. Relevant past Truisms include the ubiquitous line “ABUSE OF POWER COMES AS NO SURPRISE.”

From Twitter’s lips to Holzer’s ears, Jenny Holzer Studio is now presenting a screen cap of Branstetter’s viral tweet as an NFT in order to raise money in support of Planned Parenthood, the Center for Reproductive Rights, and PAI.

“These statements speak to the anxiety, humor, banality, tragedy, and urgency of modern life,” Holzer said in a statement. “Gillian Branstetter was kind to encapsulate the similarities between Carlson’s chyron and mine.”

This week, Title IX celebrates 50 years, the trouble with pronouns, a writer’s hilarious response to plagiarism allegations, and much more.

A Brief History of Women’s Eyebrows in Art

Since antiquity, women’s eyebrows have been sites of intense scrutiny, constantly shifting between trend cycles.

Sarah Rose Sharp is a Detroit-based writer, activist, and multimedia artist. She has shown work in New York, Seattle, Columbus and Toledo, OH, and Detroit —… More by Sarah Rose Sharp