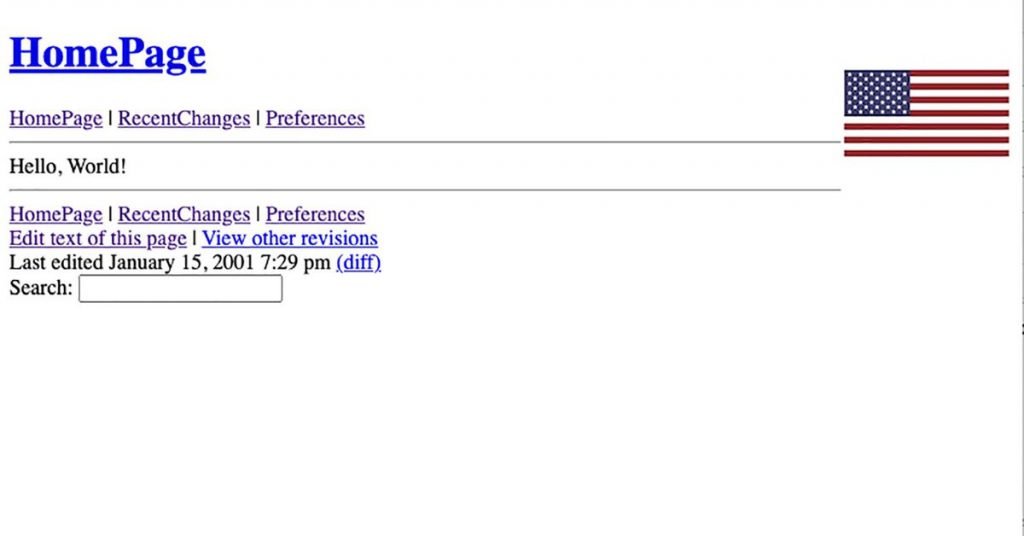 Wikipedia co-founder Jimmy Wales is selling a non-fungible token (or NFT) based on his first edit of the free encyclopedia. Auction house Christie’s will hold a sale of the token from December 3rd to 15th, auctioning it alongside the Strawberry iMac Wales was using around Wikipedia’s launch. The funds will go toward charitable causes and WT.Social, a donation-backed social network that Wales launched in 2019.

Wales’ NFT is effectively the keys to a very early version of Wikipedia, which debuted in January of 2001. “What you see displayed is what Wikipedia looked like at the moment that I set up the software,” he tells The Verge. The single page will be launched publicly on the web, and much like Wikipedia itself, anyone will be able to see and edit it. But all changes will revert after five minutes, returning it to its original state: a single edit reading “Hello, World!” following a long-held tradition of programming.

The NFT, which is written to the Ethereum blockchain, encodes a smart contract that grants its buyer control over that website. The buyer can change the window for reverting edits, and if they really want, they can turn off editing or shut down the page. They can also take a completely hands-off approach and let Wales manage the page for them.

The project is conceptually similar to an earlier sale by Sir Tim Berners-Lee, who tokenized the source code to the first web browser and donated the proceeds from its sale to charity. Wales could easily have sold control of the website without using blockchain technology, but he says he was compelled by the idea of publicly recorded and verifiable ownership. “I think what is specifically interesting is that for the first time, we have a publicly distributed, immutable kind of database, and that’s new and different,” he says. It likely doesn’t hurt that NFTs are a highly sought-after commodity that can sell at auction for huge sums — Berners-Lee’s source code token earned him $5.4 million.

Wales’ WT.social platform is an experiment in paid social networking, but not in the style of systems like Friends With Benefits that restrict access with high-priced cryptocurrency tokens. It’s free to join while encouraging members to pay for a subscription, akin to the patronage model of Wikipedia — a strategy aimed at removing the bad incentives that ad-supported services can create online.

Wales has an ambivalent overall relationship with blockchain technology. While the Wikimedia Foundation accepts donations in Bitcoin, he says the money raised through that “hasn’t been massive.” And he thinks many proposed applications of the tech to Wikipedia are misguided — like letting people pay editors for the “best” edits with cryptocurrency. “I’m like, yeah, that sounds like a great way to let Exxon control what the page says about Exxon,” says Wales. Similarly, permanent blockchain storage could make Wikipedia incredibly hard to censor, but it would also make removing abusive, libelous, or privacy-invading edits a nightmare.

But Wales sees potential for NFTs to supplement the traditional ways artists make money, especially around internet culture. He points to examples of meme images selling as NFTs, something that doesn’t affect their availability but helps subjects benefit from online fame in a way intellectual property law hasn’t so far. “People just share [memes], normally in ignorance of or in violation of any intellectual property rights — somebody uploaded a cool picture, and basically it went viral, and it’s everywhere,” he says. “It’s all very hard to enforce.”

Wales also draws parallels with the dot-com boom and bust of the late 1990s and early 2000s — a world where some companies failed because they were part of a hype-fueled bubble, while others simply launched with business models that weren’t yet technologically feasible. “We’re still very, very far from mainstream adoption of cryptocurrencies,” Wales says, because of both its inconvenience and its damaging climate effects. He notes that Ethereum, while it’s currently extremely energy-intensive, is supposed to move to a more environmentally friendly and potentially more user-friendly system. “I think as we move in that direction,” he says, “then suddenly a lot of use cases that people aren’t really considering will start to seem more interesting.”

For now, this NFT is supposed to offer a window back into the launch of Wales’ own internet-changing project. “The artistic concept is to take people back to that moment when I set up the website and had to think, ‘Gosh, this is so vulnerable. Like anybody can edit. It might just destroy the whole thing, and I’ll be taken over by trolls in five minutes,’” he says.

Wales described precisely that experience at last month’s NFT.NYC convention, joking about how someone could mint an early version of the homepage that got defaced by trolls. Which raises a question: could anybody sell an NFT based on Wikipedia, an encyclopedia where all the content is freely licensed for reuse?

“Because this is a personal kind of art project of mine that I’ve been noodling over, I specifically chose a moment in time before anybody else had ever touched Wikipedia because I didn’t want to have a feeling I was exploiting something,” Wales says. And if you implied an NFT was an official Wikimedia Foundation project, you could run afoul of trademark law. But otherwise, “with everything on Wikipedia, it’s freely licensed,” says Wales. “So if you want to do anything, you pretty much can.”