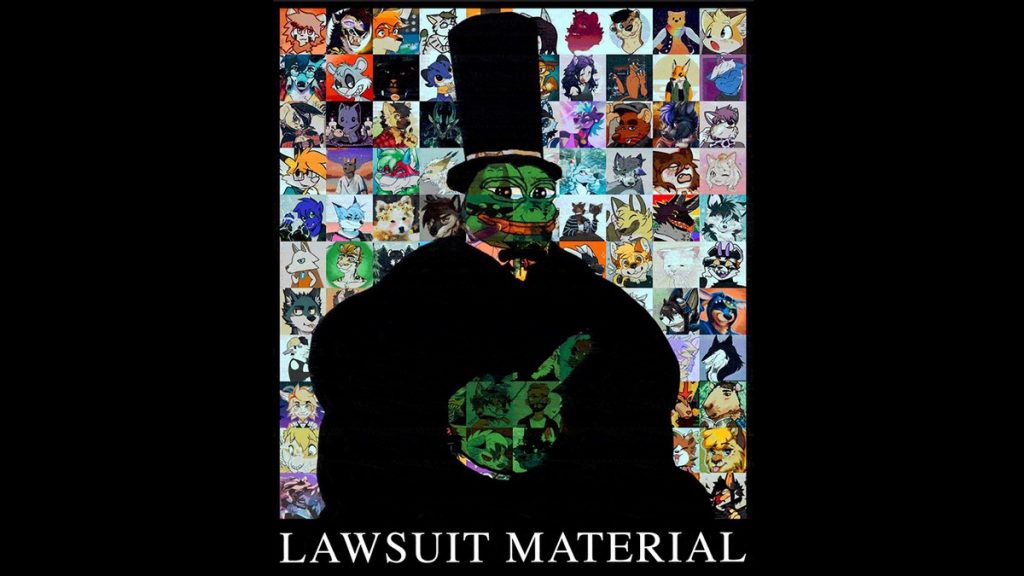 On Sunday, a Twitter user and NFT investor who goes by the pseudonym VincentVanDough put an NFT named “Right Click Save This” up for sale. The NFT featured 100 profile pictures from furries compiled into one image, laid over with a Pepe frog in a top hat flashing a middle finger, and emblazoned with a caption alternating between “LAWSUIT MATERIAL” and “CALL: 1800-SUE-ME.”

“This piece is dedicated to the furries,” reads the NFT’s description. “They may not understand the value of provenance yet, but they will soon enough.” Adding insult to injury, the NFT featuring people’s fursonas actually sold for around 20 ETH, or $100,000, according to a tweet from VincentVanDough and blockchain records.

There’s a lot to unpack here, but let’s try: NFT haters have long taunted investors by right-clicking and saving their expensive JPEGs as if to say, your blockchain-linked receipt of ownership is purely fictitious if I can do this. In response, NFT investors have taken to calling this the “right-clicker mentality” as a way to cope and signal that right-clickers simply don’t get that the token on the blockchain is the thing, and can still be sold for millions even if you can save the JPEG on your phone. Amid all of this, furries—a notably lefty bunch online—have aired their misgivings with NFTs, for example their environmental impact and the rampant art theft, and even heavily criticized Lindsay Lohan for releasing a fursona NFT in September.

So, “Right Click Save This” is a very intentional fuck-you to right-clickers and to furries in particular and has been embraced as such by everyone involved.

As you might guess, the furries did not sit idly by and just let this happen. Artists began urging anyone whose picture was in the collage to issue a DMCA request for takedown, arguing that the NFT infringed on their copyrighted images. Since the sale, the NFT has been taken down and delisted on popular marketplaces OpenSea and Foundation, the latter being the platform where the NFT was minted.

“It’s extremely discouraging to be creating artwork you just want to simply share with friends and such for fun (or in some other folks’ case, to make a living on), just to have someone come along and take a copy of it to make a profit on it themselves with little to no effort,” one furry artist whose profile picture was stolen and used in the collage told Motherboard. “I share the same view with many T-shirt print companies that scour the internet for artwork to print and sell T-shirts with no royalties to the originating artist (and without their permission or knowledge).”

“I politely demand to speak to @withFND Ceo right now, like fucking right now,” said Inami in a tweet directed at the Foundation platform where the NFT was minted. “I bought a pic of a furry for $100k and I see no furry due to your incompetence, either you give me back my furry or I will sue with the best US lawyers.”

Inami realized quickly that he had not been scammed, but actually owned the token and simply couldn’t view the listing. After some gloating on Twitter and celebration of the “free marketing” for his NFT—referring to the backlash from furry artists and creators—Inami tweeted a link to view the NFT, adding “Your move furries.”

Motherboard asked Inamiif he was surprised by the reaction to the NFT over Discord. “Nah I expected the furry community to be pissed off and cause an uproar, which is why I bought it.” He intends to hold the NFT for some time, but said he’d already received offers “at a much higher price.”

VincentVanDough and Inami both fancy themselves as NFT collectors. Inami’s page on OpenSea features an oddball assortment of NFTs. One NFT of a tweet was purchased for .2 ETH by Kento in August, but they’re offering it for a modest 88 ETH (just over $373,592). They currently sit on 65 NFTs, and over the past seven months alone, Kento has bought and sold well over $300,000 worth of NFTs on OpenSea.

VincentVanDough is a little more prolific: they’ve collected well over 3,000 NFTs according to theirOpenSea profile. On the site, they describe themselves as a “purveyor of shitcoins and fine art.” VincentVanDough has managed to earn a little infamy for himself already, as a member of the group of investors that bought the NFT rights to visit a 2,000-lb cube of tungsten once a year in Illinois.

“I have bought tens of millions of dollars worth of NFTs, not hundreds of thousands. I have no plans to do anything with my collection but continue to collect,” VincentVanDough told Motherboard in an email. When asked about whether he anticipated a DMCA takedown of the listing, he declined to answer Motherboard’s questions.

Late on Monday, VincentVanDough offered a little more insight into why he did this with a long Twitter thread defending his actions. In his thread, he claimed that he chose “100 fursona profile pictures from the 100 loudest critics I could find” of a thread made by Discord CEO Jason Citron, who recently teased crypto integration on Twitter and then backed off after receiving widespread backlash.

“I don’t need to dive into the irony of watching a bunch of right click savers absolutely seethe when confronted with the idea of someone doing the same to them,” Vincent tweeted. “NFTs are just a receipt they say, but that receipt lets us verify the creator and come to consensus on the original version no matter how many times it’s reproduced or remixed. This ability would be useful to them now.”

After a bunch of people got mad at him, VincentVanDough offered to compensate any artist whose image he had used provided they could verify it. “If I used a pfp that you created in my collage,” Vincent tweeted, “I am willing to pay you $5k to mint this pfp on Ethereum as a 1/1 and send to my wallet.”

VincentVanDough said that this more or less absolved him as he was “offering far more than any of them could have otherwise paid/sold” and claimed only one individual who reached out to take the offer “has been remotely close to being able to show that their pfp in question was in fact theirs.”

All this, according to VincentVanDough anyway, comes down to a question of provenance—but only on a superficial level. NFTs don’t actually prove that you created an image, only that you minted or bought a token, and indeed VincentVanDough’s furry NFT is entirely predicated on the idea that someone else created the images in it. We must also consider that theft is rampant in the NFT space, where unscrupulous people steal art and mint it to be sold as a collectible; if the NFT was the final word on ownership there, rather than more traditional ways to claim that someone created something, that would be a disaster. In other words, it’s less about provenance or ownership and more about what is sufficient to take control of something.

Multiple furry artists tried to offer their own lesson about provenance and filed a DMCA takedown notice on Foundation. Foundation’s Terms of Service state that they require you to provide proof that you are either “authorized to act on behalf of the owner” or are the owner yourself, and the platform temporarily delists NFTs upon receiving a DMCA request until the copyright dispute is resolved. Four individuals filed takedown notices which were reviewed by Foundation Trust & Safety to ensure they complied with the DMCA requirements. Foundation is not technically involved in the dispute, however, and delisting it on the platform does nothing to erase the NFT or records of its existence or copies hosted elsewhere, which is how Inami was able to still display it at a custom link. Foundation was not immediately available to provide a comment.

“Infringement of intellectual property rights is a violation of our Terms of Service,” an OpenSeas spokesperson told Motherboard. “We received a DMCA notice for the NFT and acted in compliance with the DMCA, per our policy.”

A DMCA takedown is not the final word on this, however. VincentVanDough said on Twitter he is filing counterclaims to the DMCA takedowns, insisting that it was “clearly fair use and intended to make a statement,” and goes on to add that “For a community into some seriously deviant shit, they should certainly see the value in being impervious to censorship.

Of course, few among the community he and Inami are mocking all the way to the bank share this sentiment.