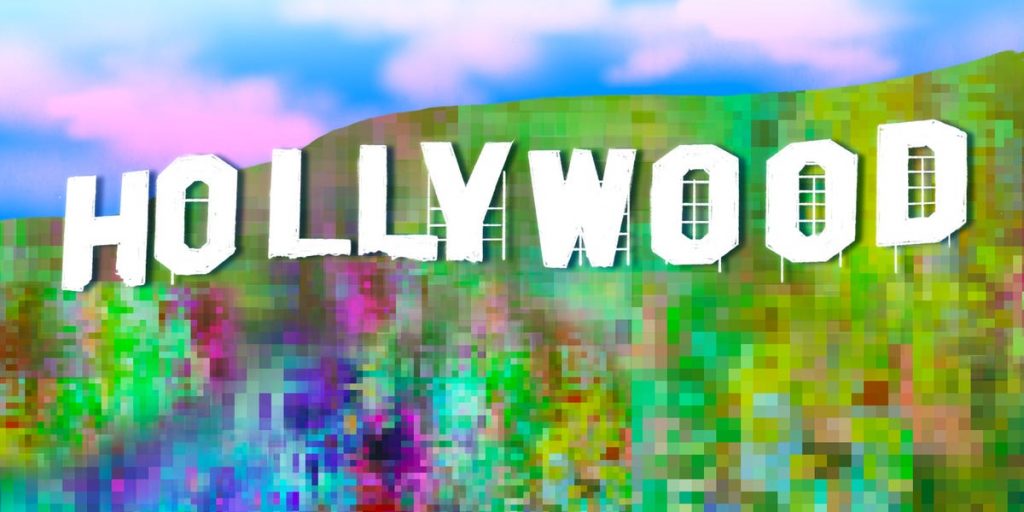 This story is available exclusively to Insider subscribers. Become an Insider and start reading now.

With NFTs poised to potentially go mainstream in 2022, Hollywood studios, creatives, and stars are increasingly exploring how the blockchain-based tech can help generate content and build audiences.

The digital assets, which generated $14.1 billion in sales in 2021 according to NonFungible.com, have seen dozens of studios and stars join the gold rush by shilling for or launching NFTs of their own. Reese Witherspoon’s Hello Sunshine recently struck a partnership with NFT collective World of Women to develop movies, and scripted and unscripted TV shows; Paris Hilton, who once schooled Jimmy Fallon on the tech on “The Tonight Show,” dropped her own collection of autobiographical NFTs dubbed “Paris: Past Lives, New Beginnings” early in February.

And months after Dick Wolf, the “Law and Order” and “Chicago” megaproducer, worked with Curio to release “The Wolf Society,” AMC Networks entered the fray in early February, launching “The Walking Dead”-inspired NFTs to commemorate the show’s 11th and final season.

The tech isn’t without its pitfalls: Some star-driven NFTs, including offerings by Grimes and rapper A$AP Rocky, saw their valuations plummet after they debuted. Quentin Tarantino sold his first “Pulp Fiction” NFT in late January for $1.1 million to an unknown bidder amid an ongoing legal squabble with Miramax before indefinitely postponing future sales, as Puck reported, casting further doubt on the venture. With many observers questioning the value of the digital assets, cryptocurrency ads during this year’s Super Bowl with stars like Larry David and LeBron James drew criticism on Twitter.

Still, the creative and business potential of the tech — especially when it comes to utility NFTs, which may be able to help protect artists’ interests in their work and in the ticket market for their live performances — has Hollywood’s attention.

“I was a part of the early days of reality television, but I’ve never been on a ride like this in my life,” said Dave Broome, a reality TV producer whose startup Orange Comet collaborated with AMC Networks on “The Walking Dead” NFTs. “It’s insane.”

Chris Jacquemin, partner and head of digital strategy at WME, lauded NFTs — and the larger shift toward web3 — as an opportunity for media companies to explore the “next iteration” of their direct-to-consumer strategies.

“The promise here is an opportunity for a consumer to actually be as closely tied to content and media assets as we’ve ever seen possible,” said Jacquemin, who reps Pixel Vault among other NFT players. “Where the media companies will presumably stop short is what I think is exciting to the consumer in Web3 — is the opportunity to actually be owners of an asset and not just a consumer of the asset.”

Insider compiled a list of promising NFT companies that are partnering with Hollywood studios, music labels, and creators to capitalize on the tech even as its players and potential evolve daily (six of the companies on this list have been around for one year or less).

We chose companies based on our reporting, nominations we received, and conversations with industry professionals – and considered factors including previous collaborations, upcoming projects, customer adoption, and the company’s potential impact on entertainment.

Here are 9 NFT companies poised to help drive the future of entertainment, listed in alphabetical order:

What it does: Film producers Arcadiy Golubovich and Michael Y. Chow set out in early 2021 to create a streaming platform that supports and monetizes short films by offering subscriptions ranging from $6.99 a month to $29.99 for six months.

The streamer announced in December it would sell 2,222 NFTs in the “tens of dollars” each, featuring artwork from the short film “Bad Assistant,” starring Jason Schwartzman and Paige Klone. (The majority of sales proceeds will go towards making Schwartzman and Klone’s next collaboration, a feature film dubbed “The Last Assistant.”)

“There are few ways to really monetize short films because the form was never a good fit for TV networks, and it doesn’t really fit with today’s streaming companies,” said Golubovich, who serves as Argo’s CEO. “There are a couple of short films here and there that will sell to Netflix or Hulu , but the majority of them live on channels for free, such as YouTube and Vimeo .”

Golubovich declined to say when the NFTs would go on sale but he added that Argo had plans to roll out more short-film-related NFT collections throughout 2022.

What it does: The NFT platform bills itself as a collaborative place for entertainment companies to “create fun collections and experiences for awesome fans.”

“We started out with the thesis that if we could merge major IP with NFTs, we could bring mainstream consumers to the NFT space,” said Curio co-founder and co-CEO Ben Arnon in a December interview with Insider.

While the company started in 2020 with NFTs that function as digital collectibles, over the last year it has looked to add more utility to the NFTs that it releases into the market. Its focus on fandom has also meant exploring the storytelling capabilities of the NFT space, which so far has yielded “The Wolf Society,” a partnership with “Law & Order” and “Chicago” super producer Dick Wolf to create an NFT-driven “membership-based society for online detectives.”

Curio has also released a 10th anniversary NFT collection for “Scott Pilgrim Vs. the World,” as well as collections based on the television adaptation of Neil Gaiman’s fantasy novel “American Gods.”

What it does: Digital avatars — or look-alike characters used in apps like Instagram, WhatsApp, and iMessages, as well as the metaverse — are nothing new. But Genies, founded in 2017 by Akash Nigam and Evan Rosenbaum, differentiates itself from other digital avatar companies with a long list of A-list celebrity users, including J. Lo, Shawn Mendes, Justin Bieber, DJ Khaled, and Cardi B.

Bieber’s Genies avatar was front and center in a music video for the song “Holy” in September 2020, for instance, while Rihanna used hers in a tweet to promote her cosmetics brand Fenty.

Genies also partnered with Dapper Labs in December to launch The Warehouse, a virtual zone where users can outfit their avatars — created inside the Genies app — with digital accessories like masks, shoes, and backpacks.

“We are focused on being the tools provider for all of humanity to really create and own whatever they create, especially in web3,” Genies head of Talent Relations Jake Becker told Insider.

What it does: Founded less than a year ago by a fivesome with a mix of tech, media, and sports experience — CEO Jeff Marsilio, alongside Eric Tesenair, Jordan Lyall, John Scianna, and Chris Your — Niftys focuses on providing digital collectibles that can engage communities of fans.

Niftys offers weekly artists drops and also has teamed up with major media partner Warner Bros. to offer NFTs for two of its film franchises, “Space Jam: A New Legacy” and “The Matrix Resurrections.”

The limited-edition “Space Jam” collectibles were either given away or priced at just $2.99, a move that Marsilio — a former NBA executive — said meant “lots of people got their first NFT through this program.” For “The Matrix,” Niftys created higher-priced digital avatar NFTs that would transform into a new design once the owners chose to take the red pill or the blue pill.

“Looking ahead, we will be going deeper with Warner Bros. on both the properties that we’ve done so far and on new properties — and really doubling down on this idea of engagement and community and rewarding those fans,” said Marsilio.

What it does: The year-old NFT platform, focused on music and sports, has backing from Grammy-winning musician and producer Quincy Jones and recently inked a partnership with Warner Music Group to create NFTs for its artists. In November, the company launched an NFT collection centered on Whitney Houston that included a never-released full-length demo the singer recorded when she was 17.

“Our vision is to bring the next 100 million mass consumers onto blockchain through shared passion points such as music,” Lin Dai, OneOf’s CEO and co-founder, told Insider via email.

Minting on the Tezos blockchain, which Dai said is one of the most energy-efficient and low-cost, “allows us to bring that vision into reality for music fans worldwide” via partnerships “with artists from Doja Cat to Whitney Houston, and industry heavyweights from the Grammys to iHeartRadio.”

Coming up for OneOf is an exclusive NFT drop in three-year partnership with the Recording Academy, timed to the 64th Grammys in April, that will commemorate the 64th, 65th, and 66th awards ceremonies.

What it does: TV producer Dave Broome, co-creator and former EP of “The Biggest Loser” and other reality fare, helped launch Orange Comet, which acts as a content studio for NFTs, offering a wide array of services, from concept development and 3-D animation to marketing and customer support.

“If we break down what an NFT really is — forget the tech behind it — the idea is to excite a fan,” Broome said. “When I was a kid, I held on to baseball cards. Those were tangible objects, and it was exciting for me. Now you have the opportunity with these NFTs to own these digital collectibles that can live in perpetuity.”

Since its launch in early 2021, Orange Comet has struck several notable deals, producing NFTs for 10 NHL teams, including the New York Islanders and Seattle Kraken, that offered access to exclusive 3-D animations as well as perks like box seats and autographed jerseys.

Most recently, Orange Comet unveiled its biggest NFT project yet as part of a multi-year partnership with AMC Networks that includes a collection of “Walking Dead”-inspired NFTs featuring artwork and animations inspired by scenes from the show.

What it does: Pixel Vault wants to build the Marvel of the next century. It’s starting by selling NFTs of characters from its PUNKS Comic and MetaHero franchises. Collectors become not only owners but also decision makers who help determine how these characters’ narratives unfold.

“Our focus is creating story alongside the community that participates in our project,” said CEO Sean Gearin. “Unlike traditional media that establishes a community around a single IP, we try to enable our community to interact with the IP. We’re not going to hit them with a DMCA notice,” aka a copyright infringement complaint.

Long-term, Pixel Vault — which is represented by talent agency WME — plans to establish its own studio through which it can develop and finance TV shows, films, games, and other creative projects based on the universe it is creating.

“By funding [the content] ourselves, we can give the community a true voice,” said Gearin. “We want them building alongside us.”

What it does: Founded in 2017 by serial entrepreneur Josh Katz, who did stints in the music industry, YellowHeart started out with the goal of curbing ticket scalping using NFTs, which act as digital contracts. With NFTs, YellowHeart can set the maximum price for ticket resales, for instance.

“The blockchain eliminates the need for what we call a ‘rent-seeking middleman,’ like ticket scalpers,” said Katz, who serves as YellowHeart’s CEO. “Once we made tickets and NFTs and put them on the blockchain, nobody could break the rules, and it eliminated counterfeiting, fraud, and more importantly, the middlemen.”

While YellowHeart has found success with NFT ticketing in more recent months as live events have picked up — the startup was the ticket provider for the Scope art show last winter at Art Basel — it’s also developed new ways to make an impact on the music scene.

In March 2021, Kings of Leon partnered with YellowHeart to launch the band’s first album in NFT form, offering buyers access to the album, artwork, and VIP seats and ultimately generating $2 million in sales. YellowHeart has also worked with other musicians including Maroon 5 and Brandi Carlile to release NFTs.