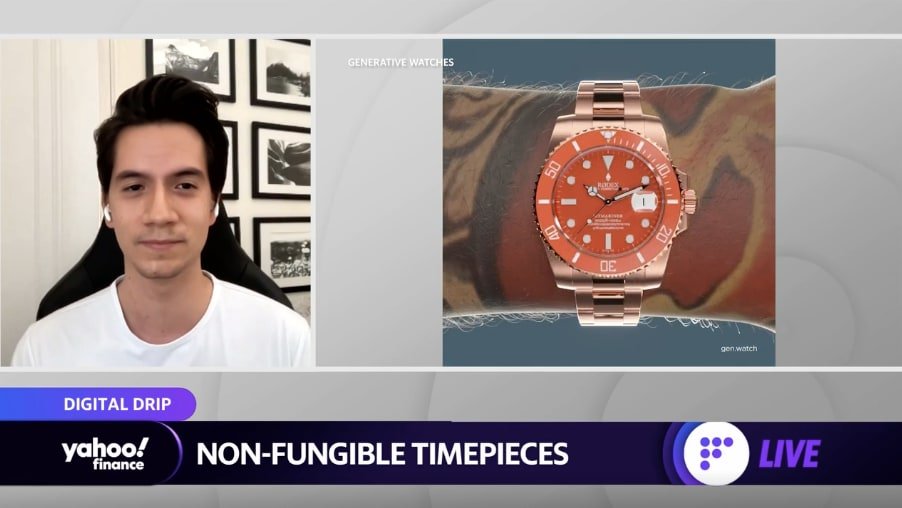 EMILY MCCORMICK: Welcome back to “Yahoo Finance Live.” Markets closed out the day and the week about 40 minutes ago. And let’s take a look at where the dust settled. The Dow Jones Industrial Average down about 180 points. The S&P 500 down about 0.8%. And as you can see here, or as you could just see there on the sector action, we did have the financials, the information technology, and the consumer discretionary sectors the laggards during today’s session.

Now, I also want to pivot over to what we’ve been seeing in the crypto market because Bitcoin prices coming under renewed pressure this afternoon, tracking the declines that we saw across big tech stocks as well. Those prices down by about 6% this afternoon and trading below that 40,000 level. And Ethereum, the second largest cryptocurrency by market cap, down by about 6.9%.

Then finally, do you want to get a check of the CBOE Volatility Index, or VIX, really pointing to this increased volatility we’ve been seeing across US equity markets. That’s still holding above the 30 level, now closer to 32 as we speak, and up about 5% during today’s session.

BRAD SMITH: Well, Em, you mentioned crypto a moment ago. People are paying as much for NFT watches as they are for actual luxury watches. Let’s not delay on this one. Joining us now is Jesus Calderon who is the owner of 3D Jesus.

OK, first there was Rolex, now there’s Rodex. We’re going to get back to that. But first on the price, we’ve got to talk about that. How much are the NFT watches selling for?

JESUS CALDERON: So as far as how much they’re selling for, I’m more in tune with Ethereum pricing. So as an example, my last drop was at 0.175E, which I believe at the time was about $700 each. But they have gone as high as $20,000. And that specific watch was actually given to the individual that sold it, which is amazing.

BRAD SMITH: Yeah, what a gift. So why are intangible watches selling for these prices right now? I mean, I can’t wear it. I don’t know– and you can correct me if I’m wrong– if there is going to be a replica of what you are getting on the NFT version of it that is actually able to be created– excuse me, it’s slow down here– in a physical version.

JESUS CALDERON: Right. So it comes down to the way that the blockchain works. And I’m probably not the best person to explain that technology. But in essence, if anyone were to replicate what I’m doing, you can always go back to the creator, being me, and understand that I was the one that, at the very least, started this concept of very detailed, very high-quality watches as NFTs.

So in terms of creating real-life counterparts, it’s something that I’ve been in talks with people about. And we might see that in the future in tandem with, if you buy one of these beautiful watches, you might be able to get a real one down the road.

BRAD SMITH: What is the anatomy or the design of an NFT watch that becomes a best seller for you?

JESUS CALDERON: Honestly, I love every single one that I’ve made. But when it comes down to the people, everyone has their individual tastes. I tried to get as much variety as I could to appeal to almost everyone. There’s a variety of tattoos, skin tones, even different–

There’s an ape arm, an alien arm, and all these different colors, as you can see here on the screen. And really, the attention to detail is what, I think, drives not only an NFT collector but also the real life counterpart.

So a real watch collector will always have a very keen eye for detail. And I think that’s at the core of what makes these awesome.

BRAD SMITH: OK. And so we mentioned this at the top. There’s Rolex, the original one, or Rolly, if you’re calling it that, or you’ve got the Rodex. I don’t know if they’re going to be calling a Rody or Roddy or anything like that. But how do NFT watches avert breach of intellectual property?

JESUS CALDERON: Yeah, so what’s very clear here is that this is strictly digital. There is no affiliation with any of the brands that you might find similarities with. I’ve been very tactful in taking that type of approach because I wanted this to be long-term. And actually, with the origin of generative watches, there was a previous version about a year ago, which treaded the line a little bit closer.

So I decided to change the branding completely and be very diligent with– these are strictly only digital as of right now. Anything that becomes real life would be in partnership with an authorized dealer or even a completely unique design, let’s say.

BRAD SMITH: Now, some resale markets have started to dabble more into NFTs and even directly annex some physical products to perhaps a vault, like we’ve seen StockX do in the past and most recently. With regard to watches and what we may see in the future there and how that actually gets into an NFT landscape, whether it’s a physical one that has an NFT peg to it, or whether it’s just an image that is an NFT in itself. How do these amass value in the resale market? Is it purely how much the people are willing to pay, how much a different buyer, I guess, is willing to spend on it at the end of the day? What is it that adds to the value over time?

JESUS CALDERON: Yeah, so with that, I would say there’s a number of different things. I personally don’t like to focus on the monetary value of the pieces that I make. I think that’s just sort of a thing the market can work out on its own. I don’t really have any particular goals with making each watch worth something.

I just want to keep producing the best and be at the forefront of what anybody else is doing in the landscape. If you see anybody else’s NFT watches, there’s no easy way to put it. But I’m very far ahead in terms of quality. So as far as what the market dictates these watches should be worth, that is up to them.

But that being said, with all of this talk of the metaverse and what’s coming next for blockchain and Web3, I am in the process of making these actually functional and not just videos of a digital watch. So what I mean by functional is, you would have a digital watch that you can actually tell the time with. You’d be able to interact with it, sort of like a video game. And I think that by itself is going to add a tremendous value to the owners of these pieces.

BRAD SMITH: Certainly. OK, so the existing pieces that are already out there, they would then have that added element just layered on top of it then?

JESUS CALDERON: Exactly, yeah. The current owners would just be able to get that new version that is actually functional. Maybe they can equip it with their other characters, like the Bored Apes, maybe they can equip one of my watches if they own one as well as maybe the Punks. There’s a Punk version of one of these watches.

There’s a lot of interactivity that can happen. And I’m just barely scratching the surface.

BRAD SMITH: It’s really interesting because it’s not just the development of your own watch. It’s also developing it for a different landscape or a different reality in the metaverse. And so how long, or how far along rather, are developers on getting into what the practicality of some of their existing NFTs would be in existence in the metaverse?

JESUS CALDERON: Right. So I think that’s a little bit difficult to predict. But if I were to give a sort of timeline, I feel like we are maybe in the late ’90s, early 2000s of the internet. So if you look at how long it took for the internet to really take off and apps to happen all over the world and all of these wonderful services that we enjoy now, I think where we are with blockchain and crypto and NFTs is at around that point.

It’s that inflection point of maybe, it could be five years, could be 10 years. But it’s coming. And there’s no stopping it, that’s for sure.

EMILY MCCORMICK: Jesus Calderon, who is the 3D Jesus owner joining us here today. Appreciate the time and the conversation, Jesus.