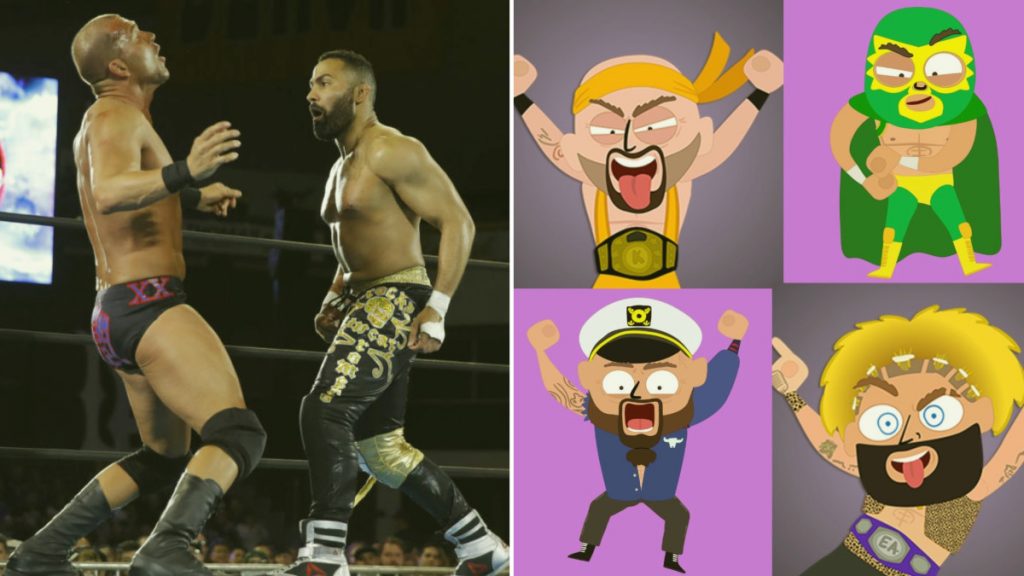 The guides into this vast world of NFTs, Phantom wallets and crypto exchange platforms are New Japan Pro-Wrestling star Rocky Romero and The Good Brothers, Karl Anderson and Doc Gallows. Along with nZo, they all play starring roles in The Gimmicks, a new community-driven animated short series reliant on NFT technology.

“It’s opening the world of crypto and NFTs to the wrestling audience,” Romero says. “This is very cutting-edge, and we’re really excited to help introduce it.”

To turn the idea into reality, Romero linked up with Toonstar, a Web3 animation studio that produces high quality animation within days, and Mila Kunis’s Orchard Farm Productions. Writers for The Gimmicks include Dave Ihlenfeld and David Wright, both of whom enjoyed success writing for Family Guy and Star Trek: Lower Decks.

“This is going to be South Park meets professional wrestling,” Romero says. “We can do anything in animation. The opportunities are limitless. And when Mila Kunis’s production company joined in, it went to a whole new level.

“We are so passionate about this project, and we love the characters of Chico El Luchador, Chad 2 Badd and Sex Ferguson. So why not do animation? It’s a chance for us to be really bold.”

The series premieres on Friday, March 25 at 1 p.m. ET. Twenty episodes are set to air, debuting each Friday. Under the show’s unique distribution strategy, the only way to watch is through owning the NFT.

“That’s the way you get access to the show, and it mints for free on March 18,” Romero says. “That collectible NFT allows members to watch, and gives access to a number of interactive features, including help direct the story line.”

The goal, Romero stresses, is for viewers to directly engage the content. That will be evident in the format of The Gimmicks, as every episode will end on a cliff-hanger. Those who hold the NFT will have a vote on how that episode should conclude, and the finish will air the following week.

“People are going to choose their own adventure for how we end each week’s show,” Romero says. “We want to engage with our fans in new ways, so making this incredibly interactive was really important to us.”

Another element of community interactivity is the DIC punch, which is reminiscent of the Facebook poke. It serves an innovative on-chain social layer and sign of community engagement for NFT holders, as well as introduces some additional gameplay to the world.

“It’s going to be completely different than anything people have seen,” Romero says. “It’s been challenging, but I’ve loved everything about being a part of this project with the writers and the whole team.”

Each episode is approximately three minutes long, and the series will follow the characters as they attempt to bring the Wrestling Wrestling Wrestling league to prominence. The show also includes characters loosely based off some of wrestling’s top personalities, including Vince McMahon and Triple H.

“The whole thing is ridiculous, but it’s so much fun,” Romero says. “And since they’re writing this week-to-week, they can also include current events to what’s happening in the wrestling world and pop culture. We’re extremely excited, and I think it’s groundbreaking to present this as an NFT.”