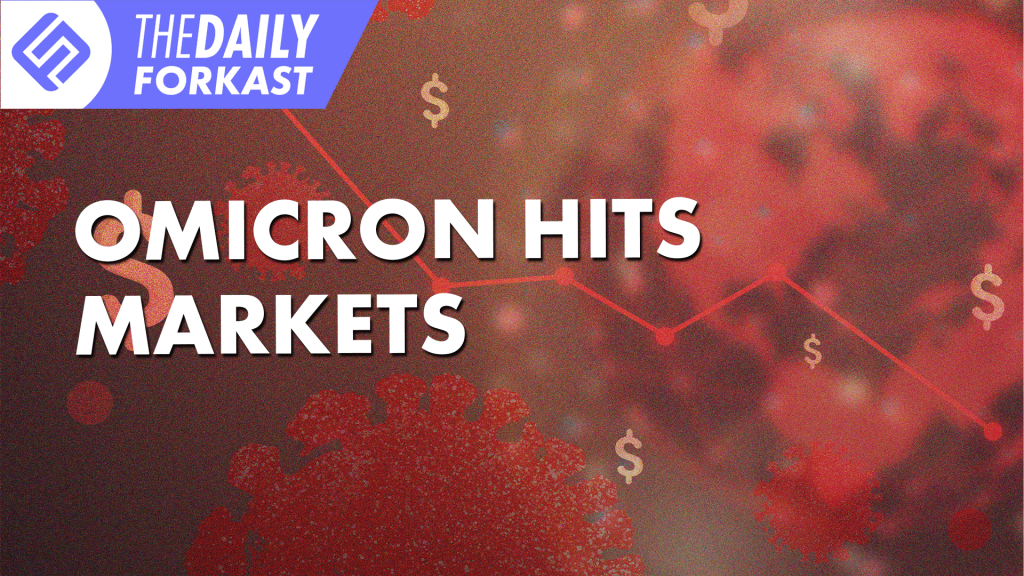 We are keeping a close watch on how markets are handling Omicron today.

Bitcoin and Ethereum were hit hard on Friday by the identification of the new Omicron Covid variant, but a new week saw both regaining much of the lost ground. We’ll take a look at that and a whole lot more coming up.

Let’s get you up to speed from Asia to the world.

Let’s kick off with some of the top stories out of Asia today.

First up, Singapore based crypto exchange CoinStore has entered the Indian market despite the ongoing regulatory wrangle that points towards a ban on all private cryptocurrencies.

The Indian winter parliament session, where the crypto bill is listed for discussion, has now begun. However, Coinstar says it is optimistic the government will introduce positive legislation to regulate crypto. The exchange also says the move is logical as a quarter of its total number of active users are located in India.

Over in China, a warning has been sounded over the Metaverse.

An opinion piece published Sunday in the state owned Economic Daily stated that the hotter the metaverse gets, the more the public should stay calm. The article said there may be social, ethical and rule of law issues ahead over the metaverse, and suggested that for small and mid-sized investors, jumping in is like licking the blood on the edge of a knife.

Earlier this month, another commentary expressed concerns over trademarks mentioning the metaverse after a surge in the number of companies registering them.

You can find out more at Forkast.News.

Meanwhile, global markets were sent reeling by the discovery of the Omicron variant, and crypto was no exception.

Most major tokens slid around 10% over the weekend, though signs of recovery had begun by Monday morning Asia time.

Investor confidence across various asset classes, including crypto was hit hard by the threat of more lockdowns and travel restrictions as a result of the identification of the new Omicron variant.

Bitcoin fell almost 10% to a little over US$53,500 on Friday, while Ethereum slid 13%. Though both have since seen their prices recover most of those losses.

One expert told Forkast.News that while the wider market sentiment carried across to Bitcoin’s price on this occasion, he doesn’t see that being a long term story.

“I think it’s an uncorrelated asset by default. It’s not tied to the fortunes of national economies as tightly as some of the other assets we might see.”

However, Miller does see Bitcoin’s volatility falling along with that of other crypto assets as market capitalization grows.

Meanwhile, he says market dominance is a very interesting metric. And though Bitcoin still currently rules the roost due to it being the most developed asset, that story is changing with Ethereum on the rise.

“You’ve seen a huge amount of innovation and and uptake and adoption and use cases coming to market that were perhaps in 2017, speculative, but today very real. You know, I’m talking about NFTs, decentralized finance, decentralized lending, stablecoins using this network.”

For instance, one of the few coins to show steady growth over the past few days is Luna, the native token of the Terra blockchain, a protocol which uses fiat pegged stablecoins to power price stable payment systems.

Over in Japan, could NFTs become advocates for literary translators?

2020 hit sci-fi novel Pure is being transformed into an NFT, with due profit being given to the translators. Its author hopes the move could also bring Japanese literature closer to the world.

Author Miyuki Ono’s, science fiction piece Pure, is a love story set in a world where women must consume men in order to get pregnant.

The short story went viral after it was posted on Hayakawa Publishing’s online blog in 2019, gaining over 200,000 views that led to it being published as a book last year. Now it’s to be translated in English inversions, which will only be available as NFTs on the open sea platform.

In her blog, Ono said “by releasing this story and its translations as NFTs, I hope to suggest a new possibility for literary translation and encourage more translations from Japanese“.

She added that translators working in Japan faced great challenges, often having to take on jobs outside of translating, such as teaching, saying they struggle to survive on the compensation they receive unless a work is published as a book and even then, their reward may not reflect the level of effort put in.

By selling her literary works directly as NFTs, Ono hopes to lead a movement where NFTs become a new source of income for authors and translators.

In another unusual move two English versions by different translators, Laurel Taylor and Kalao Almony will be released simultaneously.

Ono says her next move will be to release NFTs that include film rights and the rights to sell adaptations of her work.

And that’s The Daily Forkast from our vantage point right here in Asia. Hit like, hit subscribe. Appreciate it always. Help us reach our goal to reach more of you. For more, visit Forkast.News. I’m Megha Chaddah. Until next time.