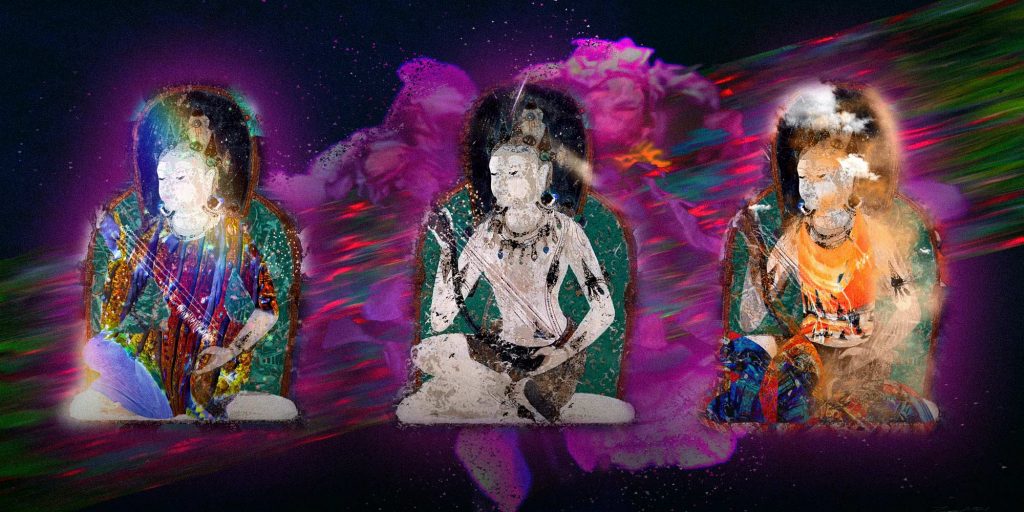 The non-fungible token (NFT) boom has propelled a string of digital artists to fame and fortune in the past couple of years — from Beeple to Pak. Now, China has its own rising NFT art star: a 27-year-old named Song Ting.

The Tsinghua University graduate has become the darling of China’s emerging market for blockchain-based art by offering a very traditional take on the new genre, using digital technology to inject fresh life into the country’s cultural heritage.

“NFTs should be a supplement to, not a replacement for, traditional art,” Song told an audience at the China Academy of Art recently.

One popular work is a psychedelic digital recreation of the Buddha statues inside the Mogao Caves, a 1,000-year-old cultural site in northwest China. Another, “Peony Dream,” pays tribute to the 16th-century Chinese drama “The Peony Pavilion” through a blend of visual animation and artificial intelligence-generated poetry.

The pieces are creating serious buzz in China. Last year, “Peony Dream” sold for 667,000 yuan ($105,000) at China Guardian — the first sale of a blockchain-based artwork at the Chinese auction house, which is better known for selling traditional calligraphy and ink paintings.

NFTs should be a supplement to, not a replacement for, traditional art.

Forbes has name-checked Song in its “30 under 30” list; blue-chip brands including Tencent, Nvidia, and KFC have partnered with her on NFT projects; and the Chinese artist has even collaborated on works with Pak — the digital creator whose NFT “Merge” generated over $90 million in sales this past December.

Now, Song looks poised to become one of China’s most bankable artists. The country’s market for NFTs is worth an estimated 300 million yuan — still relatively small by global standards — but it’s growing rapidly. And unlike the U.S. market, it’s dominated by a small group of artists, including the “Peony Dream” creator.

Song, however, is trying to keep her feet on the ground. She knows that NFT trading in China is a “special market” subject to all kinds of risks: from a sudden crash to unpredictable government regulation.

The former liberal arts major deals with the hype and uncertainty by practicing calligraphy, writing out the same Chinese characters again and again: “Be humble and be persistent.”

Though fame has come suddenly, Song has been working on blockchain art for years. Indeed, she has played a key role in building the market in China.

She first became interested in blockchain as a sophomore at Beijing’s Tsinghua University — one of China’s top two colleges — in 2015. For her 20th birthday, a friend gave her a copy of “Bitcoin: A Peer-to-Peer Electronic Cash System,” a manifesto written by Bitcoin’s enigmatic creator, Satoshi Nakamoto. Song, who was a keen science-fiction writer, says the paper blew her mind.

“Reality is even more sci-fi than my own stories!” she recalls thinking.

She began honing her coding skills and became a regular participant in college hackathon events, where computer programmers collaborate intensively on software projects. Soon after, she began creating art inspired by the Chinese classics she’d been reading at university.

Doris Zuo, a former classmate of Song’s at Tsinghua, recalls that Song was already a passionate advocate of the blockchain revolution while at college. “She’s driven by this strong sense of mission that makes her a superwoman,” says Zuo, who now works as an analyst at Morgan Stanley in Hong Kong.

In 2018, a game called CryptoKitties — which allowed players to purchase, collect, and trade virtual cats via the Ethereum blockchain — became massively popular all over the world. The craze sparked an explosion in interest in trading art via the blockchain, which later evolved into the NFT movement.

Song watched these trends closely. When American blockchain companies started making an effort to tap into the Chinese market, she earned her first 0.2 Bitcoin — then worth just a few hundred dollars — by helping them translate documents from English to Chinese.

After graduation, Song decided to set up her own digital art studio — a risky venture at the time. Her parents weren’t impressed. Song’s mother had pushed her from a young age to follow a traditional path: marrying a wealthy man and living an easy life. But Song had bigger dreams.

“I want to make blockchain, and AI developers all over the world proud of me,” she says.

The young artist quickly became a linchpin in China’s crypto art scene, acting as a bridge between the movement and China’s traditional art establishment.

In 2019, she curated China’s first blockchain-themed exhibition at Beijing’s Today Art Museum — an event that also showcased Song’s work in an offline setting for the first time. Last year, she gave lectures about NFTs at the prestigious China Academy of Art.

More recently, Song has been working on a project called Ting Museum, an online platform that allows NFT collectors to create personalized galleries to display their crypto art. Visitors to the museum already account for 2% of total traffic on Cryptovoxels, an Ethereum-based virtual platform, according to data from Crunchbase and Cryptovoxels.

The Chinese artist is also trying to use her growing success to support creators across the developing world. She has become a collector herself, investing in more than 700 digital artworks by around 300 different artists from developing countries.

NFTs should never be tools for billionaires to make more money … it’s supposed to be about the self-expression of a new class of people.

When she heard the story of a digital artist from Brazil who had to travel two hours from his home to the nearest internet café, Song contacted the man and offered to help auction his work. She says her mission is to use crypto art to bring people together.

Her own art, meanwhile, has continued to evolve. For her recent piece inspired by the Mogao Caves, Song used software including Adobe After Effects, Photoshop, Blender, and Unity to synthesize the colors of the Buddha statues and the play of light inside the caves. The aim, she says, was to “let it dance.”

All this work has proved financially lucrative thanks to the NFT boom. Ethereum, the main cryptocurrency used to trade NFTs globally, was worth around $10 per coin when Song was in college; now, it’s hovering at just over $2,700. But Song insists money isn’t her main motivation, and that the NFT movement is about more than just financial speculation.

“If we only focus on the NFT frenzy of the past couple years, then I admit there’s a huge bubble,” she says. “But NFTs for me should never be tools for billionaires to make more money. In the long term, it’s supposed to be about the self-expression of a new class of people who are riding the wave of the blockchain revolution.”

Indeed, a correction in the NFT market might even be a good thing, according to Song. It would flush out the speculators and opportunists, and force creators to work harder to produce groundbreaking new work.

“I could be lazy and, you know, just edit my previous work a bit or come up with some new spin on the same thing — flowers and applause would still come to me,” says Song. “But that’s not what I came here for. I sincerely wish the market cools off a bit, so that only those who have a true passion for the industry will stay.” Song Ting. Courtesy of the artist

The Chinese authorities are still figuring out how to regulate the NFT market, industry analysts told Sixth Tone. Chinese tech giants Alibaba and Tencent are taking a cautious approach: building their own blockchains using a cryptocurrency-less system where artworks can only be sold through the primary market.

“This is a special market with a special structure,” says Song, “but it also has its own meaning to me.”

Song, however, tries to maintain a long-term view. Crypto art has already been through some dramatic ups and downs — especially in China — but she’s convinced that the movement represents the future.

“Everything is happening so fast in this industry,” says Song. “I might fail, but there are at least 50 more years for me to pursue my mission before I retire.”