Premier League players and NFTs: ‘You’re better off investing in a pack of hot dogs’ – The Athletic 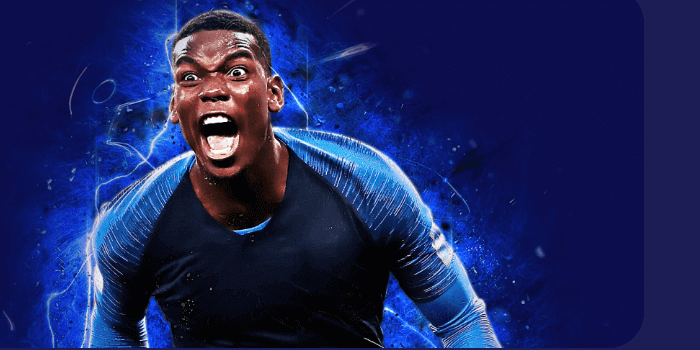 Six months ago, Paul Pogba promoted an NFT (non-fungible token) project called Cryptodragons to his social media followers, announcing that a digital asset had just sold for 35 Ethereum. At the time, this was worth $162,000 (£132,000) as global crypto markets were booming.

Cryptodragons was billed as “a Metaverse where Dragons can breed, battle, earn Ethereum and more” when Pogba first posted about the scheme in mid-November, close to the all-time peak in value of the Ethereum cryptocurrency with which most NFTs are purchased.

But interest in Cryptodragons has since slowed to a trickle with barely any sales taking place. Those sales that do occur are in the low tens of dollars, 99.9 per cent lower than the number touted by Pogba, who still has the website address in his Twitter bio and is labelled the “Father of Dragons” by the brand. 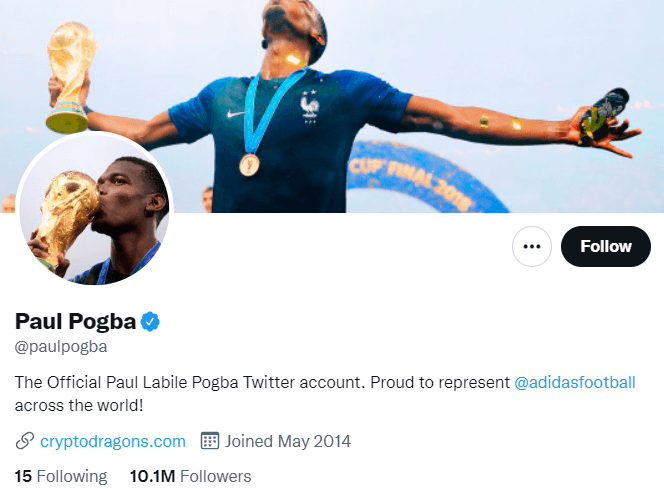 The Manchester United and France midfielder, though, is far from alone as a footballer who has put his name to NFT schemes.

To their advocates, they are an exciting digital version of collectibles such as trading cards. Critics, though, say they are a vehicle for financial speculation, while lack of regulation means investors have little recourse if they lose huge sums of money buying and selling NFTs. And the figures are generally only going one way at the moment.

Liverpool’s Trent Alexander-Arnold changed his profile picture to an NFT image of Muhammad Ali a couple of months ago, then changed it again, perhaps because of a vociferously negative response from some of his followers, a common theme of any footballer posting about NFTs.

Tottenham Hotspur forward Son Heung-min joined Twitter to great fanfare earlier this month, quickly gaining more than 200,000 followers. One of his earliest posts was a quote tweet about an NFT scheme in which he also mentioned Paris Saint-Germain star Neymar. After an angry backlash from fans, Son’s post was deleted, although he still appears to be endorsing the scheme on Instagram. 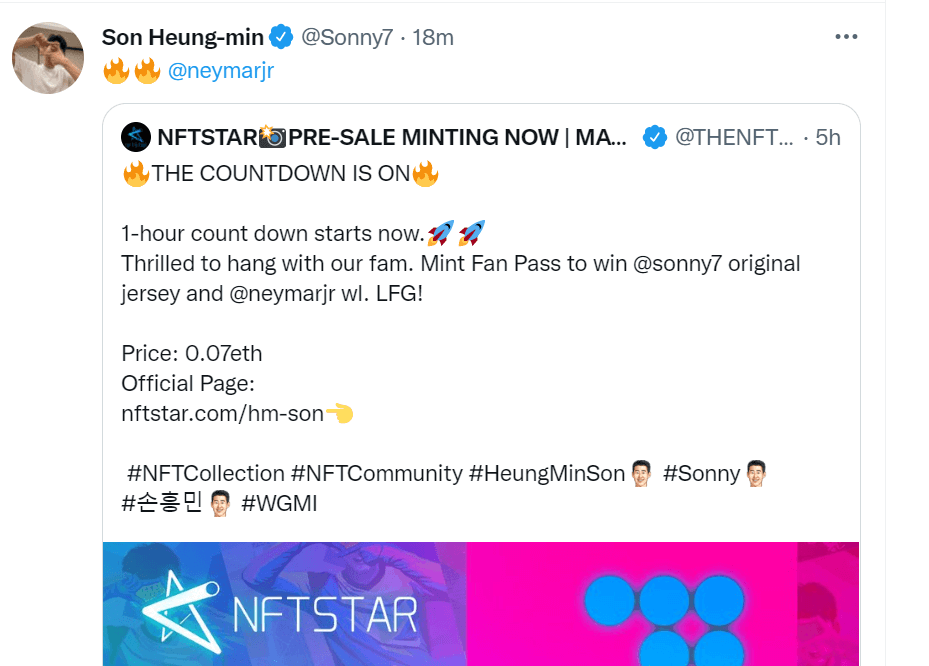 An NFT and cryptocurrency company that had sponsorship deals with Rangers and Hibernian has ceased trading tokens after its value crashed. Scotland and Liverpool’s Andy Robertson, Manchester United player Luke Shaw and Chelsea’s Callum Hudson-Odoi promoted Sportemon Go products on their social media accounts but those NFTs are no longer available on the secondary resale market.

In October, Wayne Rooney, England’s all-time leading goalscorer, described himself as a “partner in Blockasset”. The NFT scheme promoted by the Derby County manager, though, shows fairly consistent sale prices and is still trading at substantial volumes, unlike so many other projects promoted by current or former footballers.

Since November, cryptocurrency markets have tanked and one Ethereum is worth less than half as much as it was six months ago. But even more dramatically for those who might have bought Pogba’s Cryptodragons at their peak, this specific project has completely cratered in value.

NFTs can be bought and sold on the website OpenSea, which functions like an eBay for the digital assets. The current “floor price” of the Cryptodragons project — the lowest price at which items can be bought — is just $34 (£27.90). Recent sales have been as low as $19 (£15.60), with barely any above $100 (£82) in the last month as the number of purchases has decreased dramatically. 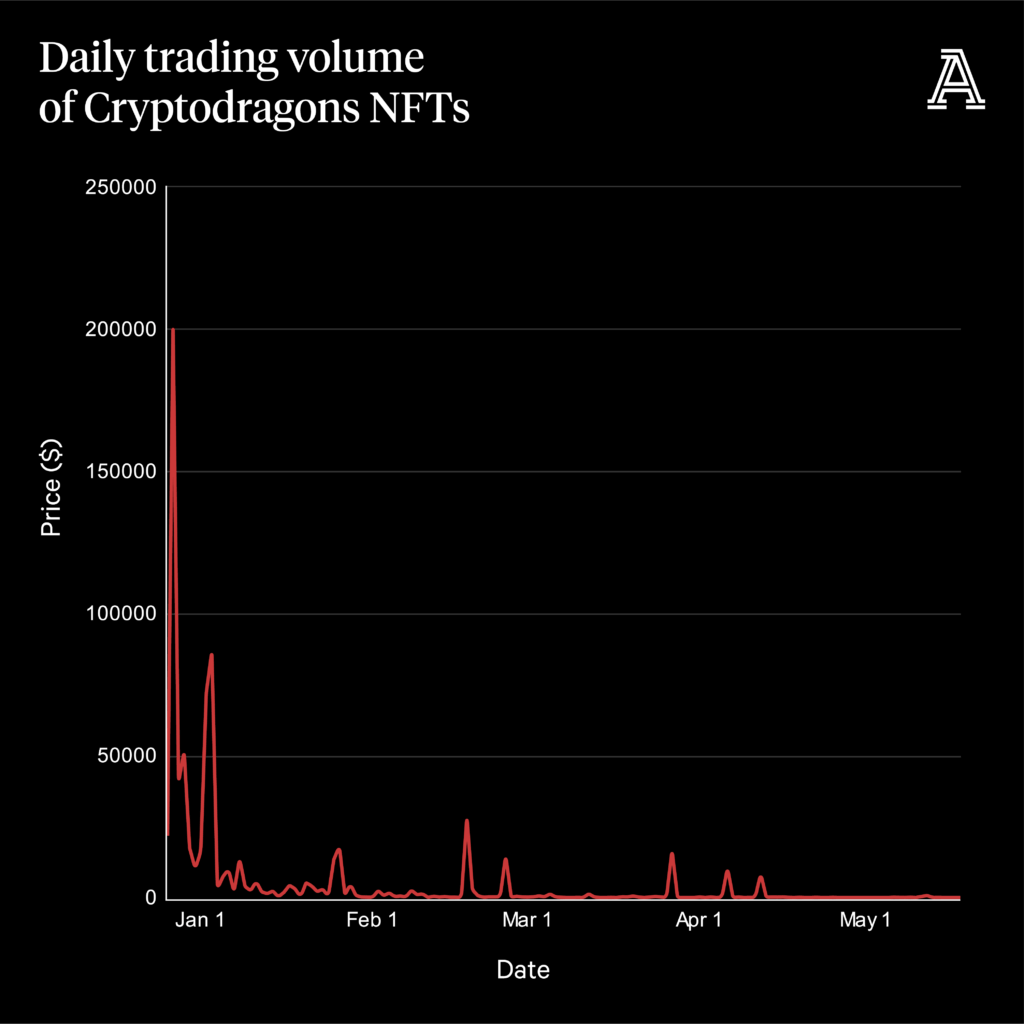 “Better off investing in a pack of hot dogs,” says one user on the Cryptodragons Reddit page. “Bought a first born for like 0.5 eth or something back at launch,” says another, describing spending around $2,000 (£1,640) on a Cryptodragon around the time Pogba advertised them.

Pogba — who has also advertised BitClout, a “blockchain-based social media platform” — has 10.1 million Twitter followers and 53 million on Instagram, putting him in the top 10 most-followed players in the world.

Father of Dragons is here! I am happy to announce our partnership with @cryptodragons – the NFT champion. Can’t wait to get my first ever NFT – an Egg with a Dragon inside.#cryptodragons #NFT #dragons #ad pic.twitter.com/31cxXi8Wog

The 29-year-old wrote “#ad” in his posts endorsing Cryptodragons, implying he was paid to make the post bragging about a $162,000 purchase of a digital dragon egg that made him “master of dragons”.

It is far from clear, in the anonymous world of cryptocurrency and NFTs, whether this purchase was a genuine one.

This world is rife with “wash-trading” where people buy and sell assets to themselves to create the illusion of high prices. This is illegal in regulated financial markets but not in terms of cryptocurrency and NFTs.  There is no direct evidence of wash-trading in this case.

Cryptodragons and Pogba did not respond to requests for comment.

Former Chelsea and England captain Terry created a Twitter account just a few months ago, and promptly began using it to promote his favourite NFT projects and then his own: Ape Kids Football Club.

Soon, many other players started tweeting the bizarre cartoon monkeys, on sale for hundreds or even thousands of dollars.

But the project has completely tanked, with those who bought in when their heroes were promoting them on social media now sitting on huge losses.

The “floor price” of the project is now just $41 (£34) after some of the NFTs sold for thousands of dollars at the beginning of the year when they were being hyped by footballers.

After Terry announced Ape Kids Football Club in January, the Premier League, UEFA and FA trophies were removed from the NFTs, as well as the badge of Chelsea, the club which Terry now works for, for intellectual property reasons.

Many of Pogba’s Cryptodragons were bought and sold, albeit at rapidly declining levels, as can be seen in the public data on the NFT trading website OpenSea.

However, it is unclear what happened with the NFTs that form the Sportemon Go project endorsed by Robertson, Shaw and Hudson-Odoi.

The website is poor quality and hard to search, a point immediately made by hundreds of fans questioning why these well-remunerated stars were promoting such a scheme.

The Sportemon Go NFTs are also not available for secondary resale on the website OpenSea, as is standard with NFTs, raising questions about where the money and the NFTs have gone.

Rather than simply crashing in price, it is far from clear these products even exist anymore.

The potential profits may have largely dwindled but the rush to sign up for NFTs shows little sign of abating.

The Football Association is “exploring” minting its own NFT collection, which could provide a “big new revenue stream” for the organisation, according to its CEO, Mark Bullingham. The Premier League has decided on a company called ConsenSys to launch its own NFTs.

But “stricter rules are coming,” according to Geraint Lloyd-Taylor, deputy head of the advertising and marketing team at law firm Lewis Silkin. “The government and the (UK’s) Financial Conduct Authority are consulting on the new rules. Brands, advertisers and influencers looking to tap into the crypto boom will need to watch this space with care.”